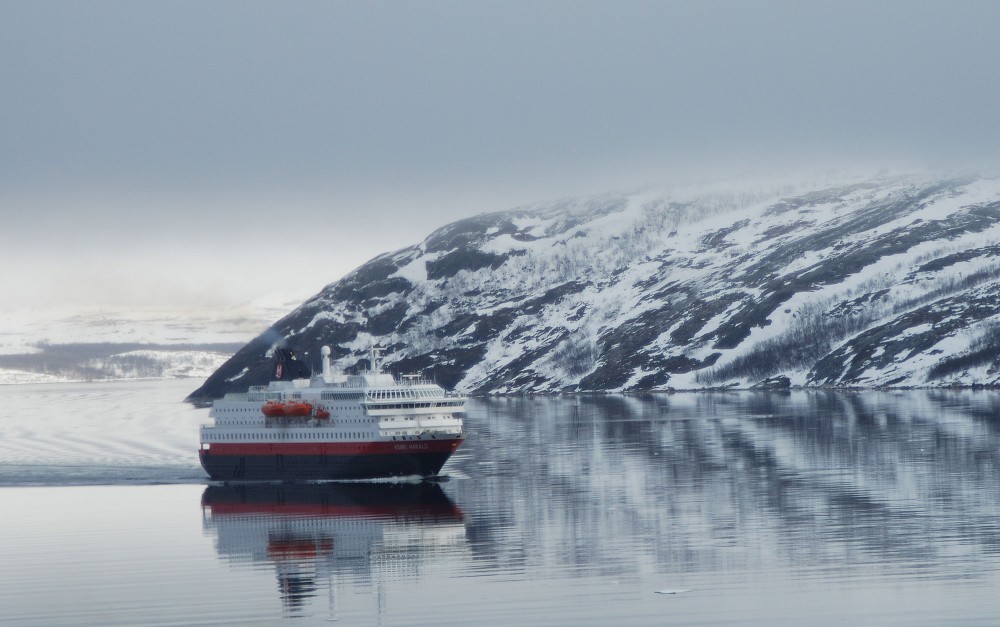 The serious troubles in the Arctic tourism industry is not the reason why we sell our assets, the Norwegian cruise ship and adventure company underlines.
Read in Russian | Читать по-русски
By

Hurtigruten has over many years significantly strengthened its presence in the far northern archipelago and today owns several hotels, office buildings, apartments and shops in local town Longyearbyen. The real estate development has gone hand-in-hand with an explosive growth in Arctic tourism.

In 2019, there were 166,000 overnight stays in local hotels, an increase of almost 40,000 in four years, figures from Statistics Norway show. The number of expedition cruise tourists that same year amounted to almost 20,000 and conventional cruise tourists - almost 50.000.

A significant number of the visitors were served by Hurtigruten’s ships, hotel staff and adventure tourism personnel.

However, since 2019 the local tourism industry has collapsed following the pandemic and Hurtigruten has lost billions in revenues.

The company is now reported to have accumulated multi-billion kroner debts. The cruise and adventure company is owned by British private equity firm TDR Capital.

This week, Hurtigruten announced that it is selling all its properties in the archipelago to Store Norske, the state company that operates the last remaining coal mine in the area.

According to the companies, the deal has been under preparation for years and is not related with the pandemic and local tourism crisis.

“Commercial real estate is an area of priority for us and we have long wanted to buy Hurtigruten’s buildings in Svalbard,” Director of Store Norske Jan Morten Ertsaas says in a statement.

“This is an exciting and commercial investment that fits well with our existing business,” Ertsaas adds. The deal includes about 40,000 square meters of property.

Hurtigruten will continue to run the hotels and tourist premises. A part of the deal is a 30 year cooperation agreement on tourism development.

According to Hurtigruten CEO Daniel Skjeldam, several companies have recently signaled interest in the hotels and properties in Svalbard. But he believes Store Norske is the perfect parter.

“Svalbard is a key destination for us and we have a timeless perspective on our investment, therefore it has been important for us to find a perfect partner that can join our long-term development of tourism and the Svalbard society,” he says.

Hurtigruten can now fully devote itself to the development of adventure tourism in the region, he underlines.

“Now that we transfer the property management to a professional real estate developer, we can focus on what we know the best: to create unique adventures throughout the whole year and with more full round-the-year jobs at Svalbard,” he says.

The deal has a value of 690 million NOK (€69 million) and includes a 105 million NOK (€10,5 million) condition that Hurtigruten reaches it growth targets for the hotels.

The Svalbard archipelago is geo-strategically located in the North Atlantic and several experts have feared that companies associated with state interests from countries like China might try to win control over the properties.

In 2014, Chinese billionaire and property tycoon Huang Nubo said he would bid for a 218 square km privately-own property located near Longyearbyen, and that he planned to build a resort for Chinese tourists on site.

That attempted acquisition was halted by the Norwegian government, which cashed out a major sum for the property.

Several experts have feared that the properties of Hurtigruten might be object of a similar Chinese interest. In a column published last fall writer and expert on Svalbard affairs Per Arne Totland warned against a Chinese takeover of Hurtigruten’s assets in the area.

“Like the strike of a magic wand they would control the biggest company in Svalbard and the key to Norway’s investments in the area, the tourism industry and a key part of local property,” Totland writes in his column.

China would get a unique platform for its Arctic ambitions, the writer argues.

Totland insistently recommended the solution that now has come on the table - the acquisition of Hurtigruten’s properties by the state-controlled Store Norske.

“In order to prevent the undermining of Norwegian sovereignty in Svalbard, Norwegian authorities must halt foreign countries’ politically motivated acquisition of local companies,” he concludes.