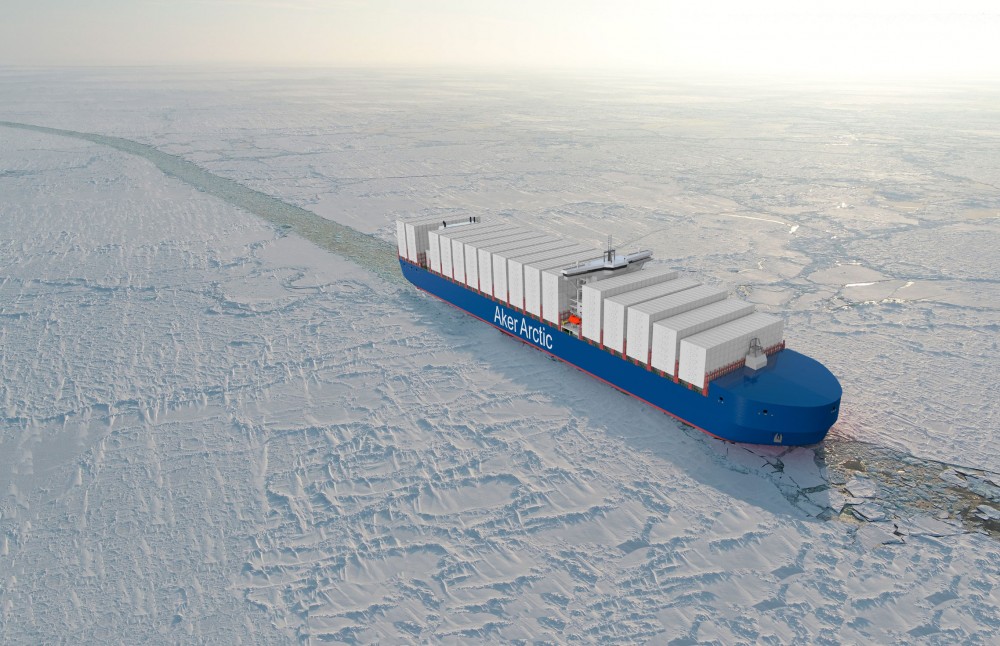 The 8,000 TEU container ship for independent use in both summer and winter along the Northern Sea Route. 3D rendering courtesy of Aker Arctic

This new Arctic containership can manage year-around sailing along Russia's Northern Sea Route and is in the current market situation only slightly more costly than the much larger Suez Canal open water vessels.
Read in Russian | Читать по-русски
By

Vessels are piling up on both sides of the Suez Canal, in the Mediterranean and in the Red Sea, waiting for the tugboats to free the giant container ship “Ever Given” that ran aground on Tuesday. Meanwhile, other ships have started to divert around Africa as it might take many days, maybe weeks, to free the 224,000-ton ship.

For container ships en route from Asia to Europe, the voyage around Africa takes up to two weeks longer, adding millions in extra costs.

Ship designers with Aker Arctic in Finland could likely not have found a better timing opportunity to introduce its latest study: an icebreaking Arctic container ship.

The Northern Sea Route north of Russia is about 40% shorter when sailing from China to central European ports than the Suez Canal route. Sailing north, though, adds costs as icebreaking assistance has been required.

Aker Arctic in Helsinki is a world-leader in design of ice-classed and ice-breaking ships.

“No such type of container ship has been available before,” explains Luigi Portunato, Naval Architect with Aker Arctic.

The design shows an 8,000 TEU container ship for use in both summer and winter along the Northern Sea Route.

The ship has Arc7 ice-strengthened hull, an ice-breaking bow and other design features for cold-weather operations. It is a double-acting ship that can turn the stern first for sailings in heavy ice. In thin ice, or no-icy waters, the 300 meters long ship sails like all other vessels with the front first.

For container shipping, schedules are important for the customers.

“Therefore, the much shorter northern distance becomes interesting if a decent speed can be achieved in winter and schedules can be relied on, which is now possible with our new design,” Luigi Portunato says.

The Aker Arctic study underlines that it is difficult to establish the exact point when sailing such container ship from Asia to Europe via Arctic waters will become more profitable than sailing the Suez Canal.

“There are many factors influencing the costs, such as fuel price, type of fuel and filling ratio of the container ship”, the study reads.

As the design of the ship allows it to sail independently in ice, icebreaker assistance is not needed, lowering the cost further.

“The most similar vessel in terms of size is the Arc7 LNG carrier design used for the “Christophe de Margerie” and its sister ships,” Portunato says. These ships are today sailing with liquid natural gas from Russia’s Yamal Peninsula to markets in both East Asia and Europe.

Recently, “Christophe de Margerie” made history when becoming the first commercial vessel to sail through thick ice across the Northern Sea Route in February. The LNG tanker sailed from Jiangsu in China to the gas production facility in Sabetta on Yamal.

In 2018, a smaller container ship from Maersk made a test voyage along the Northern Sea Route. It took place in September when only parts of the route had drift ice and posed no real winter navigation challenge.