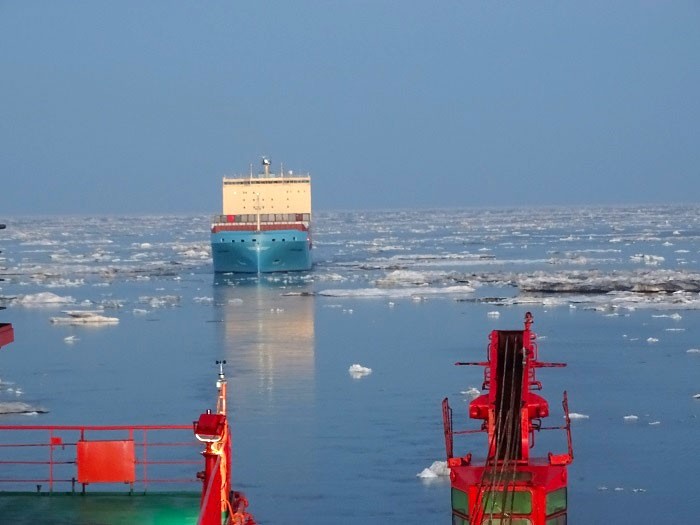 With a speed of 11 knots the «Venta Maersk» sailed through the most difficult part of the Northern Sea Route.
Read in Russian | Читать по-русски
By

The brand new container ship designed for voyages in icy conditions in late August set out from Busan, South Korea, and was from 8th September accompanied by nuclear icebreaker «50 let Pobedy» through the East Siberian Sea and Laptev Sea.

It is said to be the first regular container ship that has crossed the Russian Arctic route.

The icebreaker escort was completed as the ships had sailed into the Laptev Sea on the 11th September, nuclear power company Rosatom informs.

Ice data from the Russian Arctic and Antarctic Research Institute show that there is still more than one-meter thick ice in major parts of the East Siberian Sea, while the whole Kara Sea and practically all of the Laptev Sea is ice-free.

«The convoy successfully proceeded through the Sannikova Strait, which is the shortest route, with an average speed of 11 knots» says Rosatom Chief of maritime operations Vladimir Artyunyan.

«There has been no complaints from the ship captain or the shipping company,» he underlines.

The «Venta Maersk» is now independently continuing its voyage towards its end destination of Bremerhaven in Germany.  It will proceed through the Laptev Sea, and subsequently the Kara Sea and Barents Sea before it enters Norwegian waters.

The nuclear icebreaker «50 let Pobedy» has course for Murmansk where it is to undergo planned repair works.

The Danish-registered container ship is built in 2018 and can carry up to 3,600 containers.

Several more companies are considering to start test voyages with container ship across the Northern Sea Route. Among them is the Korean company Hyundai Merchant Marine that in 2017 confirmed its plans to send container shipments with vessels capable of carrying 2500-3500 TEU on the route.

Russia has major ambitions for the Arctic shipping connection between Asia and Europe. But trans-shipments on the route has been sparse. In 2016, only 19 ships with 214,500 tons of cargo made it transit from the Bering Strait to the Barents Sea. That was more than in 2015 when goods volumes shipped transit along the route was only 40,000 tons.

In 2017, the goods volumes shipped transit on the route were slightly less than one million tons.

Russia to develop unmanned ships for the Arctic