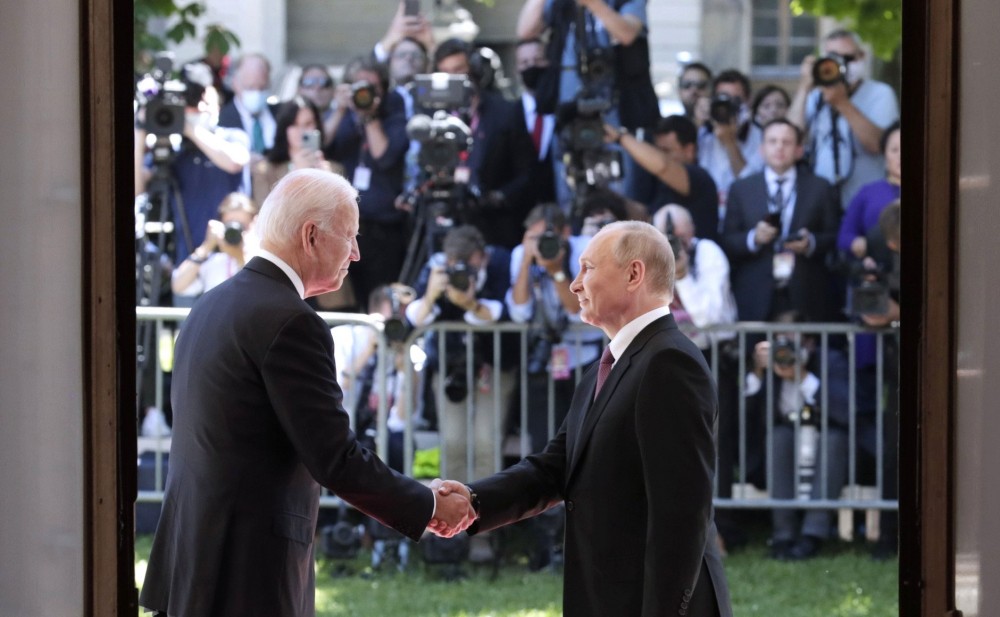 The situation in the Arctic was discussed "pretty comprehensively" in the US-Russia top meeting in Geneva.
Read in Russian | Читать по-русски
By

“Yes, this issue was discussed in a wide format and a pretty detailed way, Vladimir Putin told the press after his meeting with Joe Biden.

“It is a very important, interesting topic in the sense that the development of the Arctic in general and the Northern Sea Route in specific is of huge interest for the economy of many countries, including countries from outside the region,” he underlined in a press conference held after the bilateral talks.

The Russian president rebuffed all allegations that Russia is militarizing the Arctic with its major investments in new and upgraded military infrastructure.

Those concerns are “absolutely unfounded,” Putin underlined and said Russia is simply restoring what was lost after the breakdown of the Soviet Union.

According to Putin, Russia is open to cooperation in the far northern region.

“I told our colleagues that I see no reason for concern. On the contrary, I am deeply convinced that we can cooperate and must cooperate in this direction,” the president said. “I do not see any problem [in the region] that we can not solve,” he underlined.

Putin also stressed that his country is fully complying with international law on the Northern Sea Route, the waters that connect the North Atlantic and Barents Sea with the Pacific, and that international ship traffic, both commercial and military, will have smooth sailing through the area.

“A coastal state is committed to provide peaceful passage, including for military vessels,” Putin said.

“Are we really against that? No, we are in favor,” he underlined.

Putin also highlighted the role of the Arctic Council.

“If we all together, all interested countries, and perhaps first of all the countries of the Northern Council (sic) will work together to resolve these questions - and here are issues that need additional review - then I have no doubt that we will find decisions and solutions.”

The key role of the Arctic in the Geneva meeting is confirmed also by the American side. In a press briefing ahead of his departure from Geneva, President Joe Biden underlined that the two leaders had talked about “how we can ensure the Arctic remains a region of cooperation rather than conflict.”

Biden also mentioned “the need for us to be able to have some kind of modus operandi where we dealt with making sure the Arctic was, in fact, a free zone.”

The bilateral US-Russian meeting in Geneva come less than a month after the Arctic Council ministerial meeting in Reykjavik where foreign ministers Antony Blinken and Sergei Lavrov held separate talks.

Russia during the ministerial took over the two-year rotating chair of the Council that plays a key role in promoting international cooperation in the far northern region.

The Arctic Council first of all deals with issues of environment, climate, biodiversity and research, and military and national security are not part of the Council mandate.

Still, Russia pushes for the inclusion in the Arctic cooperation of a platform for talks between leaders of the countries’ armed forces.

“In order to prevent a degradation of the military-political situation in the Arctic, it is in Russia’s interest to support a resumption of the annual meetings between Arctic leaders of the general staffs that was halted in 2014,” Russian Ambassador at Large Nikolai Korchunov said ahead of the Arctic meeting in Reykjavik. It would be an “efficient measure to strengthen trust and security in the region,” he added.

Also climate issues are part of the US-Russian bilateral agenda. The administration of Joe Biden has put the fight against climate change high on its agenda and Russia is with its vast territories inevitably a key player.

US special envoy on climate John Kerry has been in Moscow to discuss the issue with the Russians. And the Kremlin is under mounting pressure to address the climate issues also as part of its Arctic Council chairmanship.

It is not clear to what extent climate change was on the agenda during the top meeting in Geneva. During his press conference, Putin was asked by a journalist about the issue. But he failed to respond.