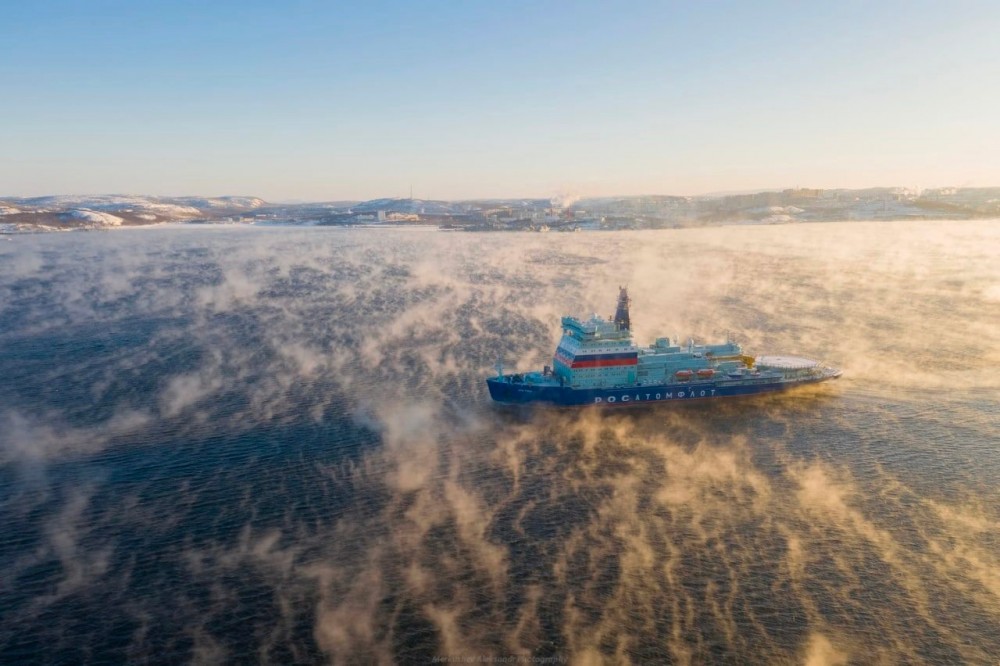 Russia might ultimately decide to build icebreaking container carriers for the Arctic. The country's expanding fleet of nuclear-powered icebreakers is based in Kola Bay. Photo: Rosatom

"There is a huge interest in the international business community," Chief of Rosatom Aleksei Likhachev tells the President.
Read in Russian | Читать по-русски
By

“With your approval, and on the basis of our Northern Sea Route project, we would like to start the development of a great transport corridor for containers,” Likhachev said in his meeting with Putin on Wednesday this week.

According to the general director of the state nuclear power company, the container shipping will open “a completely new level of business and completely new economic position for Rosatom, as well as for our country,” a transcript reads.

It will also benefit the entire world economy, he argues.

Rosatom has over the past years actively worked with plans for container shipments on the Northern Sea Route, and subsidiary company Rusatom Cargo intends to build a new seaport with infrastructure for shipping containers in Murmansk.

According to the company, there is a potential for at least 4,5 million TEU across Russian Arctic waters. Two terminal hubs and up to 30 ice-class container ships could be built as part of the so-called Northern Sea Transport Corridor project, the company has argued.

Up to 42 billion rubles (€461 million) are planned invested in a transit terminal located between Lavna and Belokamenka on the western shore of the Kola Bay. The new infrastructure is to be up and running in the summer of 2024.

Aleksei Likhachev and his Rosatom has since late 2018 been in charge of the development of the Northern Sea Route. In addition to its management of the Russian fleet of nuclear-powered icebreakers, Rosatom is responsible for development of infrastructure along remote and icy sea coasts.

According to the Rosatom chief, the development of the sea route is progressing quicker that originally planned, and Russia now risks running short of icebreakers. A renewed analysis on the need for icebreaker capacities for the period after 2024, as well as after 2030, will now be conducted, Likhachev said in this week’s meegting and handed the President a list of preliminary proposals.

Rosatom is currently in the process of building a fleet of five LK-60 icebreakers (project 22220) that ultimately will replace and complement the ageing fleet of vessels project 10520 and 10580. In addition, the building the first Lider, a super-power 120 MW icebreaker capable of opening large shipping lanes through the sea-ice, is underway at the Zvezda yard outside Vladivostok, Russian Far East. A total of three Liders are planned built, the first of them to be ready for sailing in 2027.