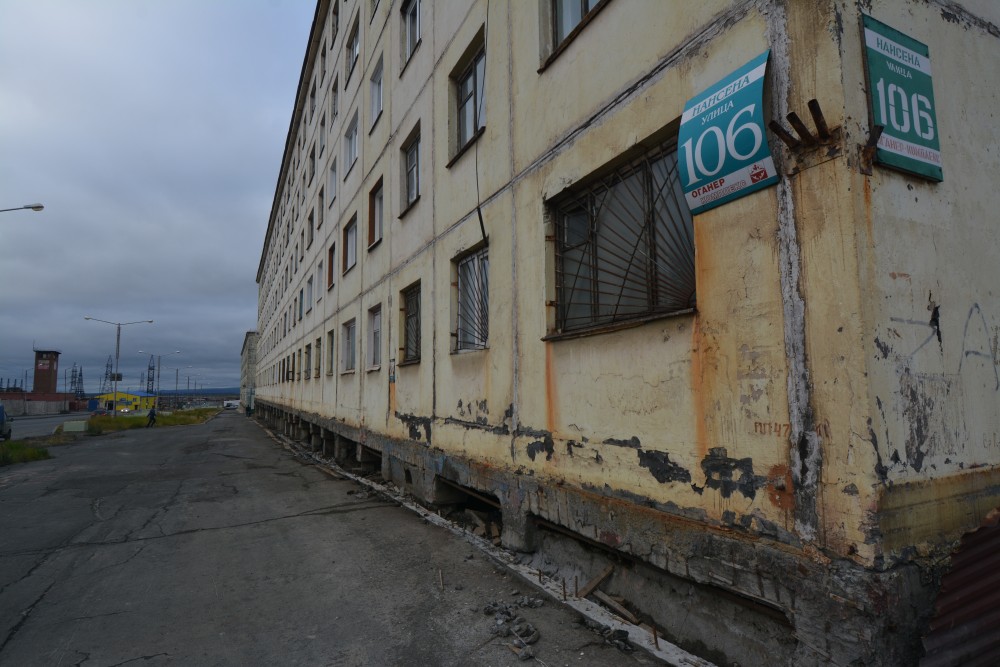 The foundations under this apartment block on the Nansen Street in Norilsk has started to collapse. Photo: Thomas Nilsen

With shocking fast rise in temperatures inside the Arctic Circle, the thaw will have devastating impact on those buildings built on the soil.

The Barents Observer has previously reported about a study predicting that urban infrastructure across the Russian Arctic could collapse within the next few decades.

In Norilsk, such dramatic impact on apartment blocks is already visible. Like on the Nansen Street where the foundations to the 5-floor apartment block 106 has severe cracks and the pathway besides is really bumpy.

Permafrost is the layer of frozen rock or soil that you find on the in the circumpolar north, including most parts of Siberia. It is the upper part of this soil that now starts to thaw.

Regional authorities this week inspected the buildings in Norilsk and looked at needs for reconstruction, the official portal of the Krasnoyarsk Krai informs.

In 2019 and 2020, soil cooling systems were installed along the contour of two houses aimed to freeze the foundations in the ground. The system consists of a network of pipes through which the refrigerant circulates.

Russia’s Ministry of Emergency Situations (EMERCOM) issued a warning in 2016 claiming by the year 2050, the extension of the permafrost in Russia might be reduced by 25% and be the end of the century – by up to 56%.

“This will imply growing risk for a breakdown of buildings, transport infrastructure and pipelines”, Acting Head of the Ministry’s Center of Emergency Monitoring and Prognosis, Konstantin Moskin said.

Norilsk is not the only urban area that faces dramatic impacts on infrastructure and buildings caused by permafrost thaw. Longyearbyen, on Norway’s Svalbard archipelago, sees houses sagging and the unstable ground forces people to move. About 250 houses in the centre will be torn down and new buildings are erected on far stronger metal fundaments placed deeper into the ground.

Similar challenges are seen in Alaska and northern Canada.