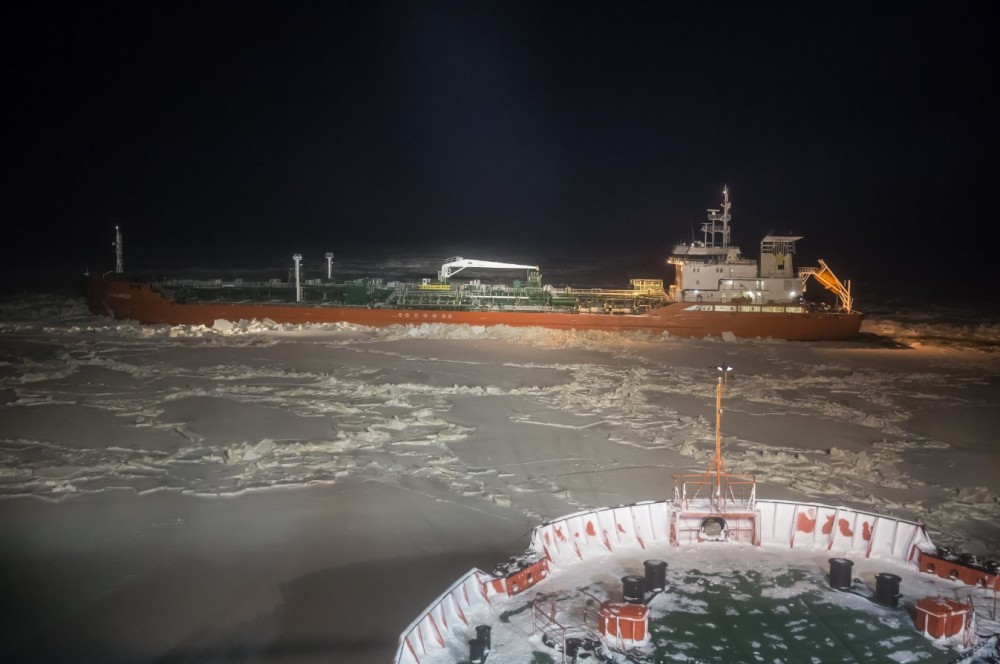 But some of the vessels will have to wait for at least one week before they are released from captivity in the remote Arctic sea-ice.
Read in Russian | Читать по-русски
By

District authorities in the Russian Far East have decided to commission two icebreakers to aid the vessels currently ice-locked in the East Siberian Sea.

The nuclear-powered Yamal  is due to arrive in the region by 20th of November, while the diesel-powered Novorossiisk will arrive by 15th of November, regional authorities in Chukotka inform.

In addition will be sent the rescue vessel Spasatel Zaborshchikov.

The decision was this week taken by Yuri Trutnev, the Presidential Aide to the Russian Far East.

The commissioning of the powerful icebreaking vessels comes as severe sea-ice conditions have taken shippers by surprise. There are now about 20 vessels that either are stuck or struggling to make it across the icy waters. Among them is the UHL Fusion that over the last days has been isolated in the waters north of the New Siberian Islands, and the bulk carriers Golden Suek, Golden Pearl, Nordic Quinngua and Nordic Nuluujaak that are located east of that same archipelago.

In the area is also oil tanker Vladimir Rusanov, as well as cargo vessels Selenga and Finnish ship Kumpula, all of which are at west-bound escort by nuclear icebreaker Vaigach.

Meanwhile, in the port of Pevek are six vessels that also are likely to need assistance to make in out from the area.

Over the past years, ice conditions in late October and early November have allowed extensive shipping along the vast Russian Arctic coast. This year, however, large parts of the remote Arctic waters were already in late October covered by sea-ice. And the white sheet is quickly getting thicker and harder to navigate. Judging from ice maps provided by the Russian Arctic and Antarctic Research Institute, there is now an ice layer across most of the Laptev Sea and East Siberian Sea that is up to 30 cm thick. And in the strait separating the mainland with the Island of Wrangel is an area with more than a meter thick multi-year old ice.

According to regional Governor Roman Kopin, there is now close contact with Rosatomflot, the state company that operates Russia’s fleet of nuclear icebreakers.

However, the additional icebreaker assistance will not be in the region any time soon. Judging from ship tracking services, the Yamal was on the 9th of November still moored in Murmansk, while the Novorossiisk was located off the coast of Kamchatka.

Russia’s two most modern nuclear icebreakers, the 50 Let Pobedy and the Arktika, are currently moored in Murmansk and St.Petersburg respectively. The latter is undergoing technical upgrade at one of the three electro engines. The ship is the first in the LK-60 class and had its first winter in the Arctic in 2021.

The whole region of Chukotka is heavily dependent on supplies delivered by ships. According to Governor Kopin, most of the goods have have already been delivered, but another 5,000 tons of foodstuff remains to be sent, he informs on his Instagram.