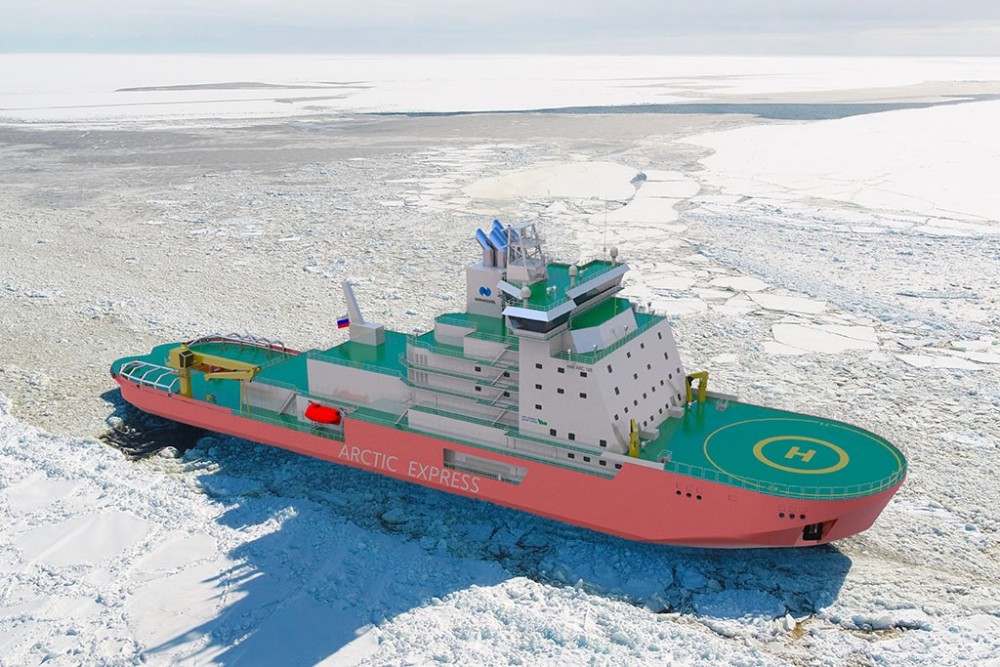 The new icebreaker is designed by AkerArctic and built by the Helsinki Yard. Photo: AkerArctic

It is the most powerful icebreaker ever built in Finland.
Read in Russian | Читать по-русски
By

The vessel that is designed for breaking through the sea-ice of the Yenisey River and Kara Sea will be of big importance for Nornickel’s expanded ore shipments from the Taymyr Peninsula.

It is designed by Aker Arctic and built by the Helsinki Shipyard on a contract with Nornickel, the Russian mining and metallurgy company. It will be able to break through 2 meter thick snow-covered ice.

The icebreaker’s mission is to escort Nornickel’s Arctic Express bulk carriers, as well as cargo ships with up to 20 000 tons deadweight. It will have facilities for transporting cargo and supporting helicopter operations.

The ship design has been successfully tested at Aker Arctic’s ice lab in Helsinki and construction is due to start in the coming weeks. The Helsinki Shipyard has already completed purchasing contracts for the main equipment for machinery and propulsion, the partners inform.

It will have an integrated dual-fuel diesel-electric power plant, which can use both LNG and low-sulphur diesel oil. Emissions  as fuel with good energy efficiency is high and emissions low.

Nornickel is in growing need for enhanced icebreaker capacity for its logistical operations in the Arctic. A major share of the company’s production of nickel, copper and other precious metals depend on shipments between Dudinka, the seaport on the Yenisey, and Murmansk. Conditions are extreme and a thick layer of sea-ice covers the waters through major parts of the year.

The mining and metallurgy company has over the past 20 years developed its own fleet of Arc7 carriers that shuttle on the route. But additional icebreaker assistance is required in the winter months. With the company’s plans for bigger production comes a need for additional icebreakers.

On the table is now the building of several new icebreakers, as well as a €300 million upgrade of the Dudinka seaport.

In addition to the projected LNG-powered icebreaker, Nornickel is considering to cooperate with Rosatom on the construction of a new nuclear-powered icebreaker that ultimately can replace the ageing Taymyr and Vaygach.

The two companies in late July 2021 signed a deal that outlines an exchange of services and joint development of new ships.

Possibly, the new icebreaker built by the Helsinki Yard for Nornickel will be operated by Rosatom.

Ship construction must be completed by the end of 2024,  says Senior Vice President Sergei Dubovitsky.

“Receiving new icebreaker by the end of 2024 is very important for Nornickel as it provides additional transportation capacities needed […],” he underlines.

Dubovitsky previously told newspaper Kommersant that the new icebreakers are direly needed and that the expansion and modernization of the icebreaking fleet is “a critical and urgent task.”

Nornickel is not the only private company now engaged in development of new icebreakers. Also natural gas company Novatek is in the process of planning construction of LNG-powered icebreakers. The same applies for oil companies, as well as coal companies.

According to Vyacheslav Ruksha, leader of Rosatom’s Northern Sea Route Directorate, there is likely to be built four LNG-powered icebreakers by year 2030. Two of them will be funded by Novatek, one by Nornickel and one by an oil or coal company, he told Kommersant.