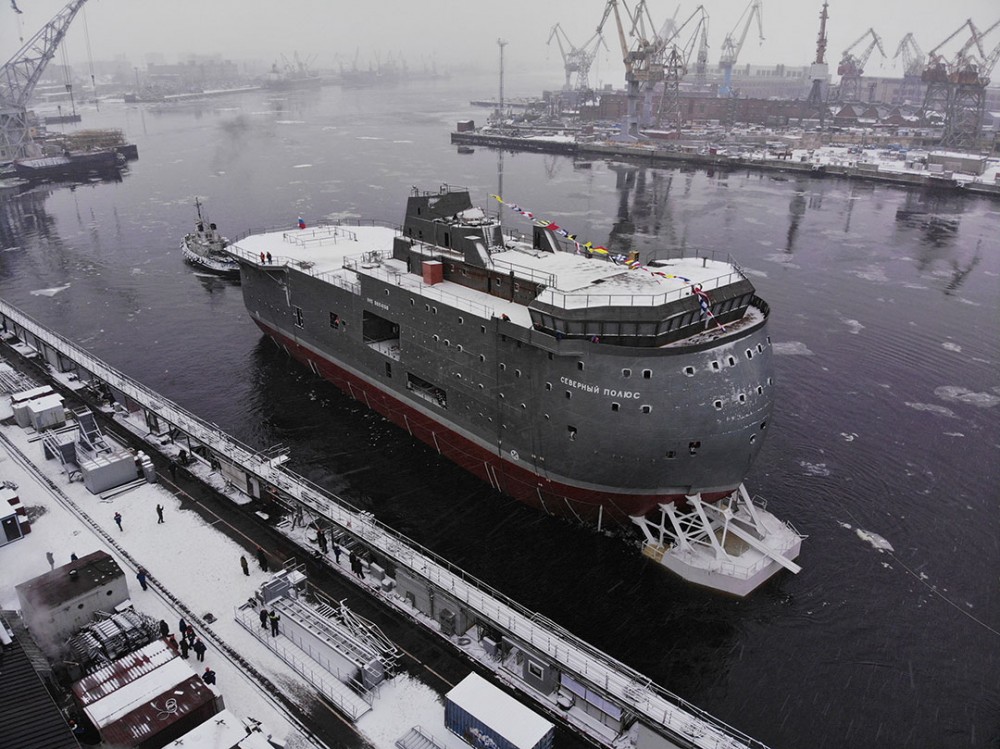 The "Severny Polyus" will be ready for sailing in 2022. Photo: admship.ru

The unique research station will conduct its first expedition this year, the country's natural resource minster says.
Read in Russian | Читать по-русски
By

There is still plenty of work left to be done. The 83 meter long vessel with the peculiar shape is wrapped in scaffold in the Admiralty Yard in St.Petersburg. But progress is rapid.

The Severny Polyus research vessel is now more than 90 percent ready, Russian Minister of Natural Resources Aleksandr Kozlov was told when he this week paid a visit to the yard.

“Already this year, the vessel will set out for its first expedition,” the minister underlined.

That expedition will not be extensive, but more like a sea trial for testing of key equipment.

The first real voyage will start in 2023 when the Severny Polyus will sail into Arctic waters for a two-year expedition. The ship is designed to be able to drift uninterruptedly with the Arctic currents for two years.

“The ice platform is our country’s contribution to the development of the Arctic,” Kozlov says in a comment.

The building of the vessel is seen also as a contribution to the current Russian presidency of the Arctic Council, and international researchers are expected to be invited to the maiden tour.

The Severny Polyus will house a crew of 14 and a research team of 34. It will be operated by the Russian meteorological service Roshydromet.

Captain on board will be Sergey Nesterov, an experienced sailer from both the Arctic and the Antarctica. He has also worked with foreign tourist cruise companies like Quark Expeditions.

“In order to provide high-quality prognosis we absolutely need constant data from the central parts of the Arctic. It is of great importance that researchers soon can get these data while staying onboard a ship in comfortable conditions and not in a tent on the ice,” the meteorological organization says in a statement.

The Severny Polyus will have 15 labs from where researchers can work year-round. It will be able to operate in the ice without icebreaker assistance and drift autonomously in remote Arctic waters for about two years.

Not everything has so far proceeded smoothly since construction started in 2018. There has been technical complications, and the construction cost has surged.  The vessel was original to cost about €90 million, but the price is now believed to exceed €120 million.

According to the Admiralty Yard, the auxiliary front engines are now in place and are being tested, and equipment for anchorage, towing and mooring are being installed.