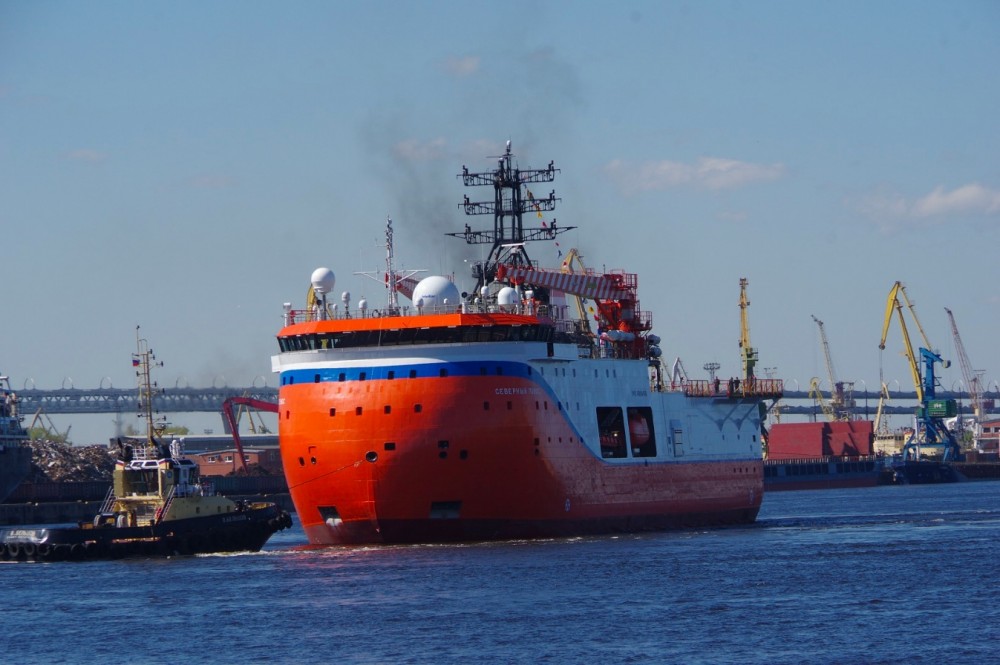 The research vessel that is designed for 2-years autonomous drifting in thick Arctic sea-ice is ready for sailing.
Read in Russian | Читать по-русски
By

There was celebration on the waterfront of St.Petersburg as the Admiralty Yard this week officially started sea trials of the Severny Polyus (North Pole), the 83 meter long vessel built for unique Arctic research missions.

“There is no other vessel in the world like this one,” said Minister of Natural Resources Aleksandr Kozlov in the ceremony.

It has taken the Admiralty Yard about two years to build the vessel that by its constructors is described as a ‘platform.’

“While researchers in the Arctic expeditions that took place several decades ago had to spend most of their time fighting for survival, they can now devote most of their time directly to research,” says yard General Director Aleksandr Buzakov.

The Severny Polyus is a research vessel that will be operated by the Russian Meteorology Service Roshydromet. It is capable of undertaking geological, acoustic, geophysical and marine research under the harshest of Arctic conditions. Even in temperatures down to minus 50°C it can provide comfortable living and working conditions for researchers and crew, the Admiralty Yard informs.

On board will be 15 labs where researchers can work year-round.

In the course of fall 2022, the vessel is due to set out for a minor expedition for testing of key equipment.

The first real expedition will start in 2023 when the Severny Polyus will sail into Arctic waters for a two-year expedition. The ship is designed to be able to drift uninterruptedly with the Arctic currents for two years.

“The ice platform is our country’s contribution to the development of the Arctic,” Minister Kozlov said in a comment early 2022.

The building of the vessel is seen also as a contribution to the current Russian presidency of the Arctic Council, and international researchers are expected to be invited to the maiden tour.