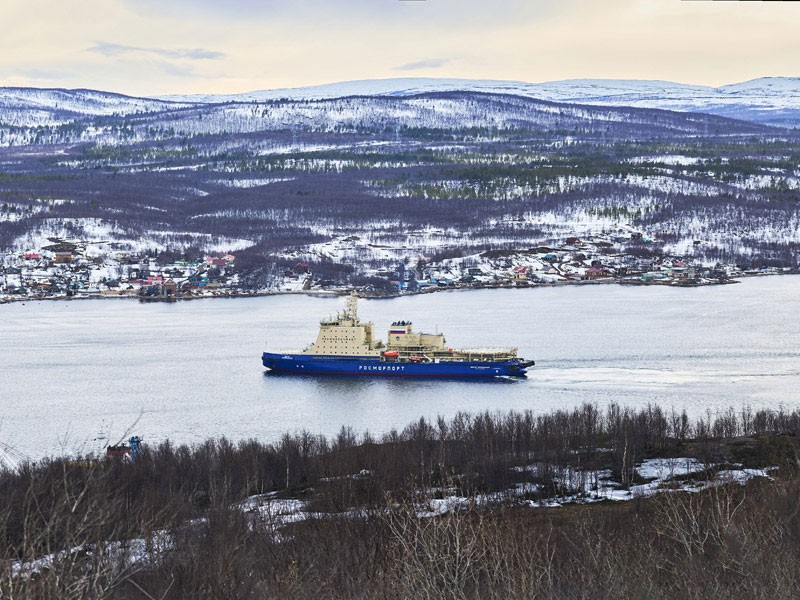 The LK-25 icebreaker made a brief visit to Murmansk before it set out for ice trials in the Kara Sea. Photo: Rosmorport

The world's most powerful diesel-engined icebreaker is on its maiden voyage into thick Arctic sea-ice.
Read in Russian | Читать по-русски
By

The 147 meter long vessel that is named after Russia’s late prime minister on the 1st of May arrived in Murmansk and shortly later set course for the icy waters of the Kara Sea. By late 5th of May, the powerful ship had made it to the remote shores of the Taymyr Peninsula.

The Viktor Chernomyrdin is one of Russia’s most powerful ice-breaking vessels. But it has never before been in the Arctic. Since it was commissioned in November 2020, the ship has broken ice in the Gulf of Finland and spent time idle by the port side of St.Petersburg.

Now, the 25 MW icebreaker is to undergo testing in some of the toughest of icy waters. The vessel is designed for regular icebreaking escorts in up to two meter thick sea-ice, and can do other operations in three meter thick ice, state ship operator Rosmorport informs.

On board the ship is a crew of specialists from the Russian Arctic and Antarctic Research Institute, the Krylov State Research Center and Rosmorport, the shipowner. The testing is expected to last for up to 15 days.

According to Rosmorport, the Viktor Chernomyrdin can provide not only icebreaker escorts, but also take part in Arctic research expeditions, transport containers and cargo, and operate as fire extinguishing ship.

The powerful diesel-engined machinery enables the ship crew to stay autonomously at sea for up to 60 days.

The Viktor Chernomyrdin is Russia’s first, and most likely also last, vessel of project 22600 (LK-25).