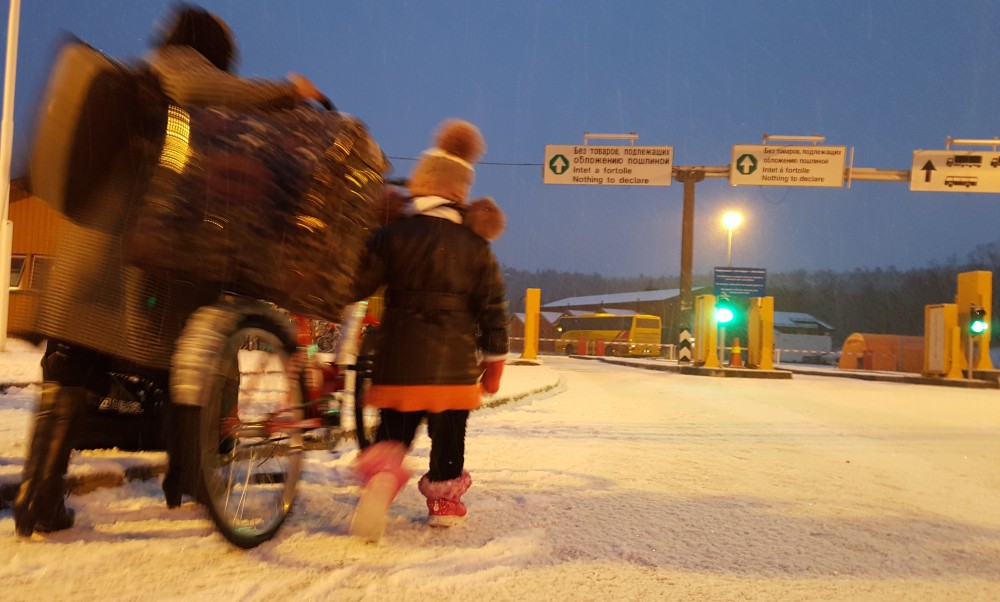 Illustration photo only. These are not the persons mentioned in this article. This photo was taken earlier this winter when asylum seekers, including with children, came to Norway on bicycles from Russia. Photo: Thomas Nilsen

It is snow. It is dark. It is cold. And it is 40 kilometres to the nearest town on Russia’s Kola Peninsula. A family with children was told to leave Norway on bicycles at Storskog this weekend, the coldest so far this winter.
By

On Sunday, the temperature at Storskog checkpoint was down to -17 degrees Celcius.

“Those returned over Storskog are dressed for the conditions,” says Arild Strømmen, Communication officer with Norway’s National Police Immigration Service to the Independent Barents Observer.

Asylum seekers were returned back to Russia both Saturday and Sunday, the coldest days so far this winter. The family with children was sent out of Norway on Saturday.

Most asylum seekers are bad at biking in the snow. The frost does not make it easier.

Arild Strømmen says those being returned are given bicycles at Storskog. It is not allowed to walk over the borderline from the Norwegian checkpoint to the Russian.

“Russia is considered to be a safe country to return to,” Strømmen says.

Transportation further is a Russian responsibility. Without money, it can be difficult to book a taxi or a seat in a mini-bus. The distance from the Russian checkpoint Borisoglebsk to Nikel, the nearest town is 40 kilometres.

Over the last few weeks, more than 100 persons that have been rejected asylum in Norway are returned to Russia at Storskog, according to the Norwegian National Police Immigration Service.

In early November, a former military camp outside Kirkenes was rebuilt to house the increasing flow of asylum seekers coming to Norway via the so-called Arctic Route from Russia. This camp is now nearly emptied.

More than 5,000 asylum seekers crossed the border at Storskog in the period from August to late November.

The last day of November, Norway said enough is enough and placed police officers on the borderline to Russia.

“Persons without a valid visa will not be allowed to enter Norway,” State Secretary Jøran Kallmyr in the Ministry of Justice and Public Safety said to the Independent Barents Observer hours after the new regime went into force.

Since then, not one single migrant has left Russia at Borisoglebsk.

Russia’s second northernmost border checkpoint to Schengen Europe, Lotta towards Finland’s Raja-Jooseppi checkpoint, has however seen an increasing number. On Sunday, 1o people applied for asylum and in total for the week 147 asylum seekers came to Raja-Jooseppi, according to the Finnish Border Guards.