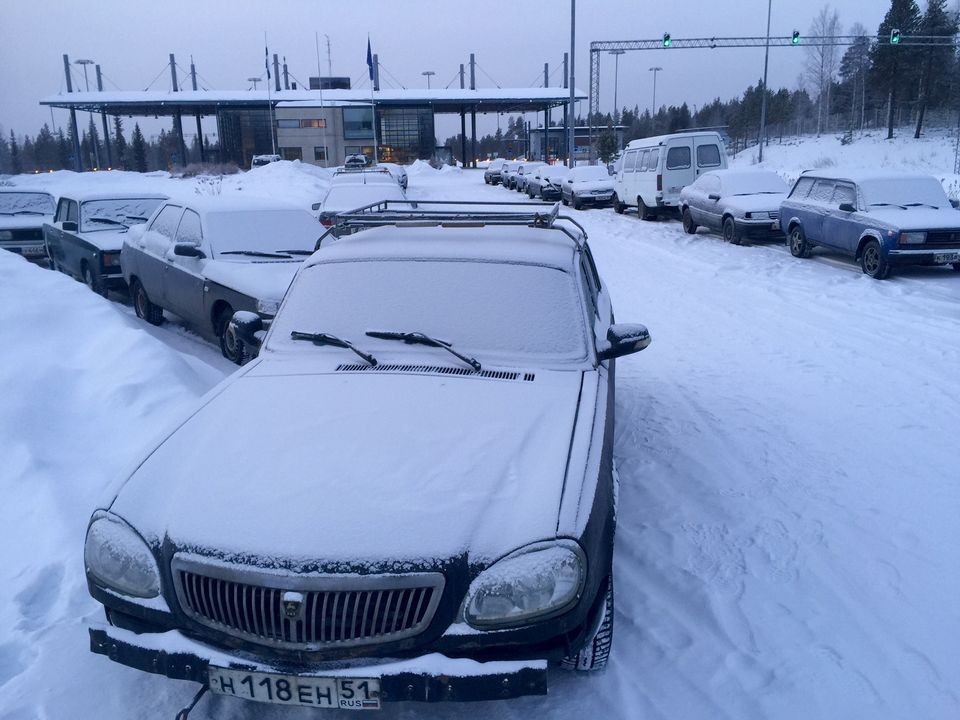 Dozens of rusty clapped-out Russian cars are piling up at Finland’s Salla border after migrants started to purchase Volgas and Ladas on their route from Russia to Schengen Europe.
By

The so-called Arctic Migrants Route via Russia to Europe is now being motorized.  Before Christmas, Finland introduced a ban on cross-border bicycling at its two northernmost checkpoints; Raja-Jooseppi and Salla.

139 asylum seekers entered Finland from the Kola Peninsula the first week of January, according to Finnish Border Guards.

Before Christmas, the Arctic Route from Russia to Norway and Finland became world-famous because the migrants had to bicycle across the border. Pictures of bicycling families, many with small children, crossing the snowy roads in the Polar night where screened on global news networks. At Norway’s Storskog border checkpoint, hundreds of bicycles piled up in containers before being sent for scrapping.

Today, Ladas and Volgas, and a few mini-busses occupy spaces at the parking lot at Salla border checkpoint. The checkpoint is some 400 kilometres from Murmansk on the road towards Rovaniemi in Finland.

Some of the Afghan asylum seekers say anonymously and off-camera to YLE that they have been cheated, swindled and threatened by human smugglers in Murmansk. The cars are sold to the migrants in the north. Most cars have plates with “51” showing they are from Murmansk region.

The cars are not at all in technical condition for driving in the cold on snowy roads. One has its front smashed and some have summer tyres. Last week, temperatures dropped below minus 30 Celsius at both Raja-Jooseppi and Salla. On the Lotta road, temperatures on Thursday were down to minus 40 Celsius. That road goes hundreds of kilometres in areas with nearly no houses or infrastructure across Kola.

Finnish Border Guards informs that the majority of migrants crossing the border in the north are from Afghanistan, Nepal, Iraq and Syria. On Monday, Lapland Border Guard division has called for a press conference in Rovaniemi devoted to the recent inflow of migrants arriving in old cars.

Until November 29th last year, some 5,500 migrants entered Norway at Storskog from Russia. It was after the migrant inflow to Storskog stopped, that the number of asylum seekers to Finnish Lapland started to increase.