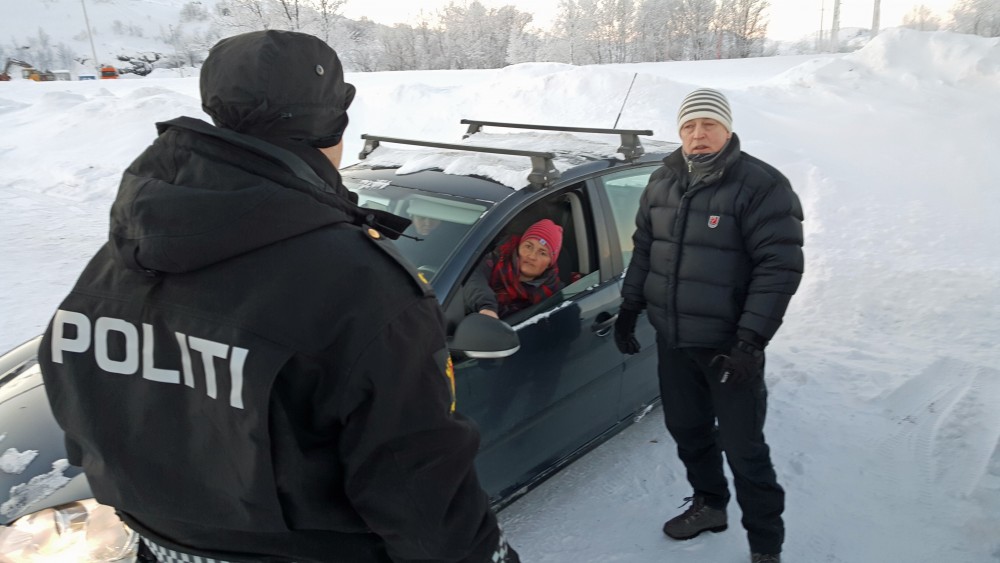 Merete Eriksson and Eirik Nilsen were arrested by police for helping asylum seekers leave the camp before a planned deportation to Russia.
By

The two are with the ad-hoc group “Refugees Welcome to the Arctic” - consisting of locals in the Kirkenes area, Norway’s border town to Russia.

Thursday morning, Nilsen and Eriksson, together with Merete Nordhus, tried to help some of the asylum seekers that came out from the Reception Centre near the airport in Kirkenes.

The camp is some 15 minutes drive from the centre of Kirkenes. There, three refugees took protection in the church in the morning.

“We try to find some solutions here,” said Eirik Nilsen to the Independent Barents Observer outside the Reception Centre. An hour later, the police detained him. A few minutes later was also Merete Eriksson asked to enter the police van and taken to the police station.

“This is not illegal, we are not doing anything wrong” she said arguing that the refugees are allowed to leave the Reception Centre as they want. The centre is not a detention centre.

“What is wrong is to send these asylum seekers out of Norway without giving them a real chance to have their cases reviewed.”

Detained on their way to the church

A third Norwegian woman was stopped by the police on the road between the camp and the church. The family she had in the car was supposed to be sent out of Norway.

“We got information this morning that 30 refugees were to be sent back to Russia with bus at 10 am,” Eirik Nilsen said before he was detained.

After the first refugees left the camp this morning, the police placed several police vehicles near the gate and at the road exit to the Reception Centre. In addition, police officers controlled all traffic in and out from the camp.

“The police in Kirkenes has detained three drivers of private cars that were transporting asylum seekers, that are given legal expulsion orders from [the Reception Centre], towards Kirkenes,” Regional Chief of Kirkenes Police Hans Møllebakken says.

“The message was a uniformed police vehicle outside the fence,” Møllebakken says to the Independent Barents Observer. He sees no reason to apologize to the church for having police officers on the inside of the fence.

“This was optionally to hinder that more [asylum seekers] entered the church, in a period of time when the situation was quite unclear,” Hans Møllebakken says.

The return of asylum seekers back to Russia is becoming a “hot potato” in Norway’s borderland to Russia. On Wednesday evening, some 60-70 people demonstrated outside the Reception Centre in support for the refugees. Kirkenes mayor, Rune Rafaelsen, earlier this week sent a letter to Prime Minister Erna Solberg asking for a better treatment of the refugees when being returned out of Norway.

Next week, a demonstration against the return of asylum seekers back to Russia is announced in front of the Parliament in Oslo.

The three Norwegians arrested by the police were all released in later on Thursday.

Police Chief Hans Møllebakken can’t say if the prosecutor will press charges. “We have not come so far. They are interrogated and released from here. They are local people so I assume this will be sorted out in the near future.”

“I care about humans”

After being released, Eirik Nilsen tells he is charged for violating Norway’s immigration act. The law reads that it is not allowed to help any foreigners to stay illegally in the country.“I have not accepted any wrongdoings, so it remains to see how the police will follow up,” Nilsen says to the Independent Barents Observer.

“I care about humans, and that is something I will continue to do,” he says.

“What we have achieved today is that no asylum seekers have been sent out.”

According to Norwegian regulations, asylum seekers who travel to Norway after residing in a country where they already had protection or could seek protection can be rejected without an ordinary asylum examination.

The new guidelines, adopted last fall, require that the Directorate of Immigration in all cases and immediately after the application has been registered, considers whether the person concerned should be returned to Russia. In addition, other asylum seekers who travel to Norway from Russia and are likely to be rejected will be fast tracked.

Last autumn, more than 5,500 asylum seekers came to Norway via the so-called Arctic Route from the Kola Peninsula.

Norway and Russia have a readmission agreement from 2007. The Agreement allows Norway to return third country nationals to Russia if the person concerned has a visa or a legal permit in Russia. Asylum seekers with a Russian visa or residence permit must therefore be prepared for a prompt return to Russia

Norway’s Police Immigration Service confirms that no persons will be returned from Kirkenes back across the border to Russia on Thursday.

To NRK, the police hints that return of migrants to Russia will be resumed on Friday.