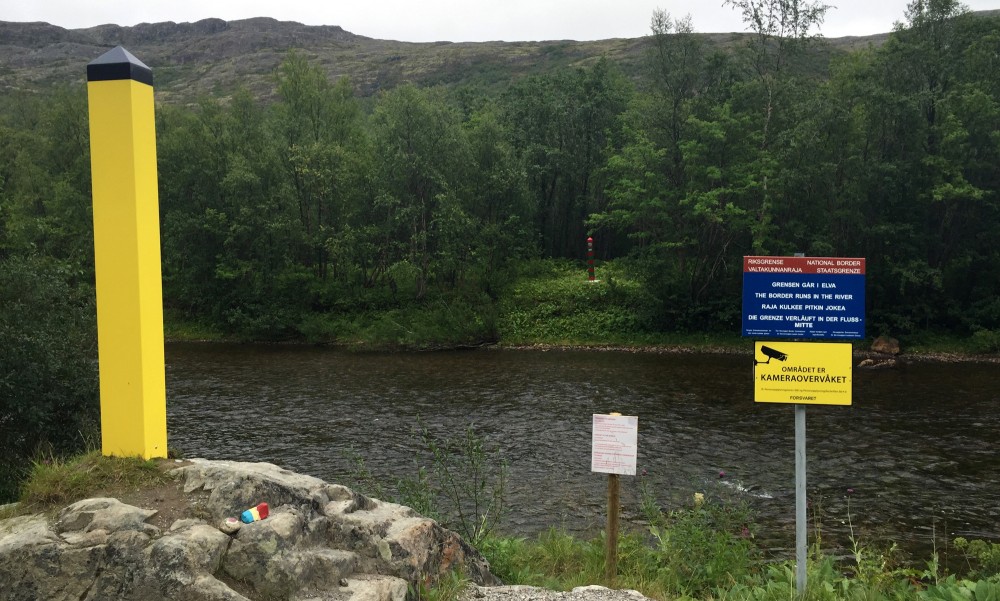 "The border runs in the river", a sign in Grense Jakobselv reads. Photo: Atle Staalesen

Two individuals had made it through the Russian security fence when they were halted by border guards.
Read in Russian | Читать по-русски
By

The Syrian citizens aged 42 and 35 were not far away from the borderline  when their attempted illegal border crossing came to an end. According to TASS, the two men had made it through the well protected fence along Russia’s inner border zone.

Border guards had received «operative information» about the planned border crossing which helped them successfully detain the men, the press service of the FSB say.

None of the two Syrians had legal registration in Russia, the news agency reports. They are now charged on allegations of attempted illegal border crossing.

The lion’s share of the 196 km long Russian-Norwegian border runs through rivers.

On the Russian side, there is a barbed wire fence with alarm system all along the border zone area. If a person tries to climb the fence, an alarm will be triggered and border guard soldiers put on alert.

In the autumn 2015, about 5,500 migrants were allowed to leave Russia and enter Norway at the Borisoglebsk-Storskog border checkpoints. The so-called “Arctic Migrant Route” ended in late November 2015.

Since then, only few attempts to illegally make it across the border have been made.  In June this year, four Moroccans were detained by Russian border guards and in March two Iranians were halted.