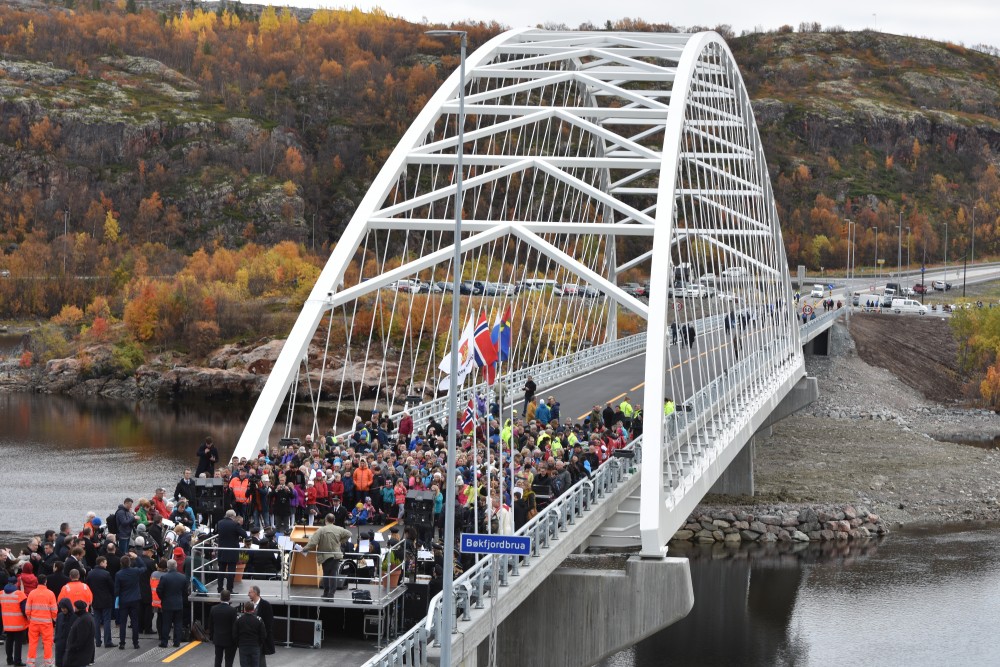 The new Bridge cross the water at the estuary of the Pasvik River. Photo: Thomas Nilsen

“This is a bridge for mutual benefit for businesses in both Norway and Russia,” says Minister of Transport and Communication Ketil Solvik-Olsen.
Read in Russian | Читать по-русски
By

Despite big politics with storms and uncertainties between Europe and Russia, everyday life for people on both sides of the border in the high north continues.

The last stretch of the highway E105 between Kirkenes-Murmansk was officially opened on Friday. A new tunnel and bridge on the Norwegian side of the border makes Europes northernmost cross-border road faster and safer to drive.

Total costs on the Norwegian side of the project are 830 million Norwegian kroner (about €88 million). On the Russian side, costs are even higher. Only 12 of the 210 kilometres linking Kirkenes with Murmansk is on Norway’s side of the border.

Traffic across the border between the two countries are increasing, although the cargo flow is limited. Most of the border-crossings are done by Russians on shopping in Norway and Norwegians on shopping tours to neighbouring Kola Peninsula.

In 1988, when the calendar still marked Cold War, some 2,800 border-crossings took place between Norway and the Soviet Union in the north. For 2017, that number is likely to be 270,000 people. With the new highway, capacity is in place for even higher numbers.

“We have a mutual interest in further developing cooperation, for business, trade, education, environment and other areas,” Minister Ketil Solvik-Olsen said in his speech at the opening ceremony.

Construction and renovation work on the highway started nearly ten years ago after the Russian and Norwegian Foreign Ministers agreed to invest in better cross-border infrastructure.

Normally, when ministers or other high-ranking officials open new bridges they cut the ribbon. Not so at this ceremony. Instead of cutting the ribbon, Minister Ketil Solvik-Olsen and Deputy Minister Sergey Aristov, knotted the ribbon in a symbolic move linking Norway and Russia.

The new highway not only significantly reduces the time needed for driving between Murmansk and Kirkenes, it is also makes the drive safer. Today, it takes about three hours from Norway to downtown Murmansk. If the border-crossing itself with customs and immigration control goes smoothly.

The border-crossing points, one on each side of the border, have over several years experienced a major increase in pressure as traveling between the countries have picked pace. Capacity at peak hours is strained and work load on the border police exhausted. Police says it’s urgent to get new facilities.

“We are very aware of the situation,” Ketil Solvik-Olsen says to the Barents Observer, although he can’t promise funding on next year’s state budget to be presented later in October.

In conjunction with the new bridge comes a new tunnel named the “Trifon tunnel” after the holy Russian-Orthodox monk, who lived in the area in the 16th century. The offical border in the north came in 1826, the last part of Europe to get state borders.

Bishop Olav Øygard of North-Hålogaland and Metropolitan Simon of Murmansk and Monchegorsk had a joint blessing ceremony on the bridge.

Solvik-Olsen says more infrastructure will be developed in the high north, including a cross-border fiber-optic line to Russia. He would, though, not elaborate on other road projects.

Oddgeir Danielsen, leader of the Northern Dimension Partnership for Transport and Logistics says the new highway plays an important role in east-west infrastructure.

“This has become a highly efficient road, linking Russia with the rest of Europe through northern Norway.”

Danielsen is confident that officials in central Europe will take note of the new road and look into how other parts of rail-, and road networks across Russian-European borders can be improved.

“Next step up here in the north will be upgrades of the road between Neiden and Kaamanen,” Oddgeir Danielsen elaborates. That cross-border road links European highway E6 in Norway with European highway E75 in Finnish Lapland.

After the ceremony on Norway’s new bridge and tunnel, the officials drove across the border for opening of Russia’s nothernmost segment of the highway. The around 17 kilometers distance from Gulfstream to Borisoglebsk was ready last autumn in top modern standard, 12 meters wide and very few curves.

Three years ago, the part of the road from the town of Zapolyarny to the old custom check-point opened after a two years construction period. Also other parts of the E105 between Murmansk and Zapolyarny are upgraded over the last few years with new bridges and wider lanes.