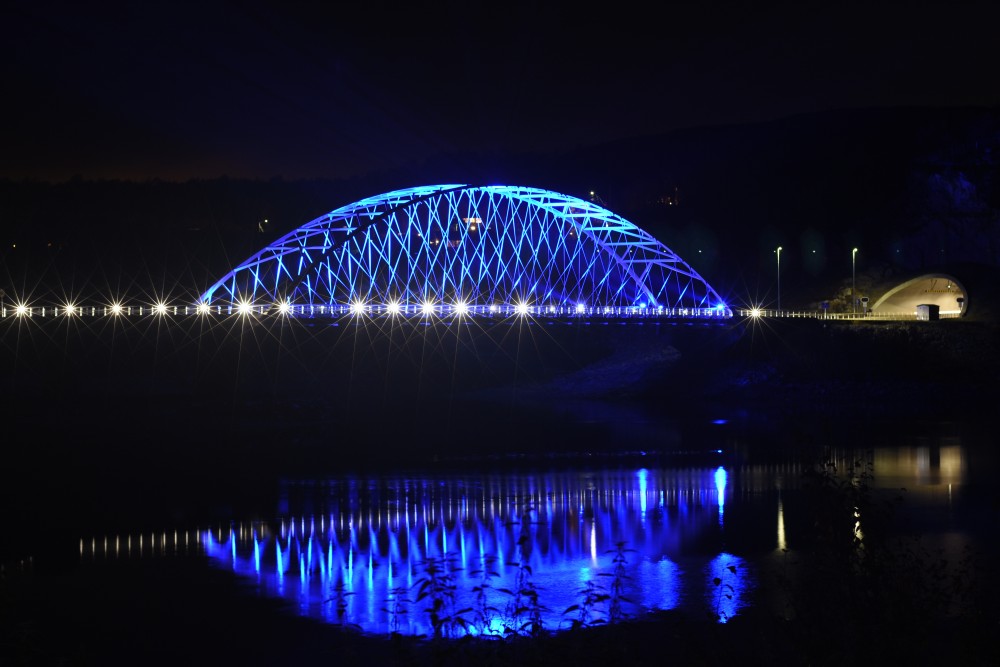 The blue-lighted tunnel and bridge opened a month ago should give a boost to easier traffic between Norway and Russia.
Read in Russian | Читать по-русски
By

It has never been easier to drive between Murmansk and Kirkenes, but October turned out to be a the first month since last summer with a drop in traffic across the Norwegian, Russian border.

All months since August 2016 have seen an increase in cross-border travel. Now, however, the number is down 1,24% compared with October last year, the police in charge of immigration control at Storskog checkpoint informs.

The average monthly increase in traffic before October this year was 12%. The new bridge and tunnel were opened on September 29th.

In late September, Russian and Norwegian governmental officials took part in the opening ceremony of the new highway, including a new tunnel and bridge on the Norwegian side and official opening of a parcel of the highway on the Russian side.

With the new highway, the drive from Kirkenes to downtown Murmansk can be done in three hours, nearly two hours faster than 10 years ago when the road was infamously winding and bumpy.

The three hour drive, though, is theoretical because you never know how much time the border-crossing itself takes. No queue and border officials in a good mood, 10 minutes. Long Saturday queue, bus passengers in line and overworked officials; one hour or even more.

«We are very aware of the situation,» Norway’s Transport Minister Ketil Solvik-Olsen told the Barents Observer when asked at the bridge opening ceremony about the border bottleneck.

Regional authorities, police- and Customs officials have for years communicated the challenge with the highly undersized Storskog border facility. Also Russia’s Borisoglebsk checkpoint, a few hundred meter to the east of the Norwegian, is undersized in peak-hours.

By October 31st, 216,817 border crossings were counted across the Norwegian, Russian border in the north.

A majority of the people crossing the border are Russians from Murmansk and Pechenga region on shopping to neighboring border town of Kirkenes. Normally, border traffic drops in times of economic troubles in Russia. Maybe not so for the drop in October; Russian retail sales grow 1% for the first ten months 2017 and domestic economy is said to be growing 1,8% this year, a fragile recovery after sales plunged more than 5% last year.

That should have given a push also to cross-border shopping.

Click on the gallery under for photos of the opening ceremony in late September.