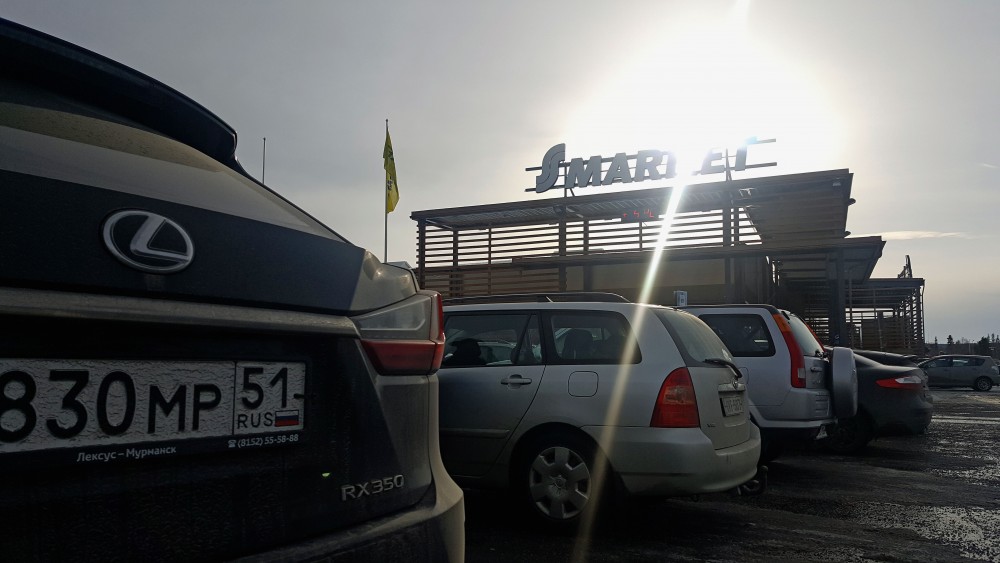 SUNSHINE ON CROSS-BORDER SHOPPING: Murmansk-cars lined up at the parking area outside S-MARKET in Ivalo. Photo: Thomas Nilsen

The growth in travelers from Murmansk to northernmost Finland was more than twice the 2019-growth on the Russian-Norwegian border.
Read in Russian | Читать по-русски
By

For the first time in many years the number of travelers across the northernmost EU-Russia border checkpoint, Raja-Jooseppi / Lotta, increases.

That is good news for Ivalo. The town’s two larger grocery stores are a popular destination for many people from Murmansk heading across the border to buy food-stuff no longer found in Murmansk-stores due to Russia’s counter sanctions against the EU.

Russia imposed sanctions against diary products like cheese and yogurt made in EU-countries after Brussels announced its list of sanctions on Moscow after Russia’s 2014-annexation of Crimea.

Private people can bring, for own consumption, some food bought in Finland.

The road between Murmansk and Ivalo goes for a large part through forest wilderness and has been infamous for its uncomfortable drive. Especially so in the spring when the splashy unpaved parts more felt like driving a potato-field than an actual road.

Nowadays, the road is becoming much better. The upgrade started after the joint Russian-EU cross-border financing mechanism Kolarctic granted €4,5 million in 2018 to improve the road.

Repair and safety upgrades will continue for another two years period, as previously reported by the Barents Observer.

Another €11 million will be invested in brand new infrastructure facilities at the Raja-Jooseppi checkpoint between the countries. 90% of the costs are to be covered by the European Union Kolarctic program, the Barents Observer reported.

The project is to be completed by late 2021.

While Raja-Jooseppi traffic is growing, the second border check-point from Russia to Lapland at Salla saw a 4% decrease in travelers last year. The Salla check-point further south is mainly used for those heading towards Rovaniemi, a drive that requires a night stay-over.

Border traffic between the Kola Peninsula and Norway at Borisoglebsk-Storskog check-points had a growth of 4% from 2018 to 2019. There are still more people crossing the Norwegian-Russian border than the combined traffic from Russia to Finland at Raja-Jooseppi and Salla.

Nuijamaa and Vaalimaa are the busiest border check-points between Russia and Finland with 3 million and 2,46 million travelers last year, the figures from the Border Guard service show.