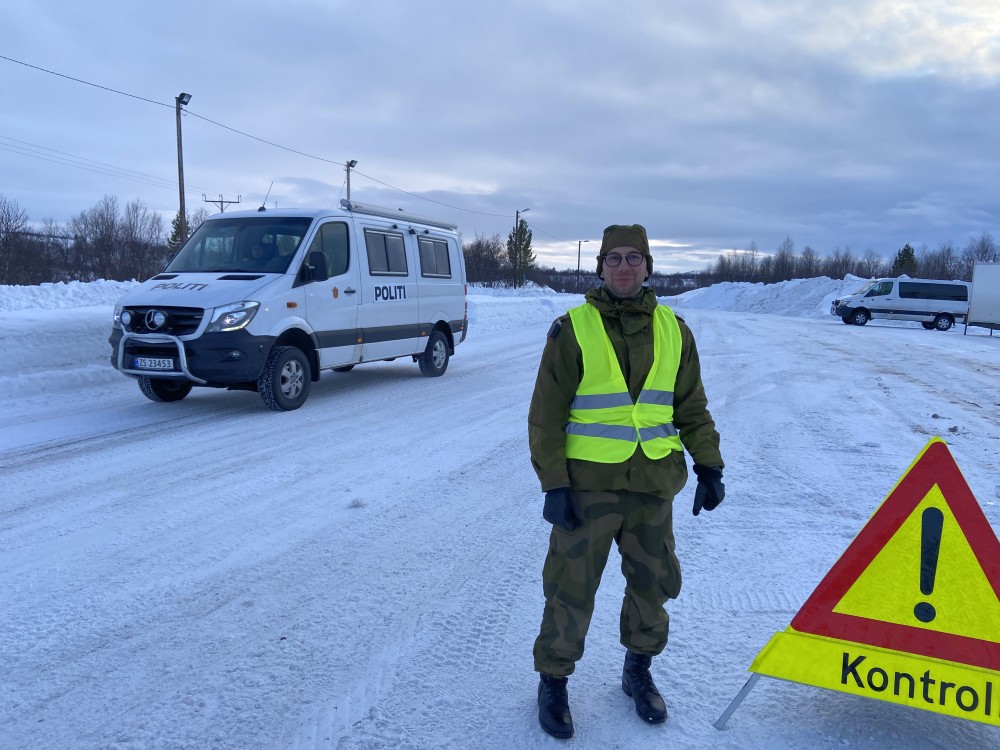 With the goal to prevent the spreading of coronavirus, soldiers are now backing up local police with turning away foreign nationals if they don’t have a legal reason to enter the country.
Read in Russian | Читать по-русски
By

Locals have to adjust to a surreal, new regime at the remote, narrow and snowy road between Finnish Lapland and Norway’s Finnmark region. Normally, you hardly notice that there is a sign telling you are crossing a border between two countries.

Here at Neiden, the easternmost of six cross-border roads to Finland, there is a whole new regime unseen before at internal Schengen borders in Europe’s vast areas inside the Arctic Circle.

Home Guard soldiers waved into the side all vehicles approaching. Those were few.

“We have had a few trucks bringing food and goods into Norway. The customs deal with them,” says second lieutenant Ketil Kristensen.

He and fellow Home Guard soldiers were called out to the border at noon on Wednesday. “We are here to assist the police,” Kristensen tells.

Today, the ‘enemy’ is unlike what soldiers are trained to meet. As the coronavirus spreads in Norway, the government on Sunday decided that the police should institute temporary entry and exit controls at both the inner and outer Schengen border.

For Finnmark Police District, controlling all traffic around the clock on the different roads far away from nearest towns and settlements demands extra personnel resources.

Lise Flø with Finnmark Police District says the assistance from the Home Guard is based on a national agreement. “The Home Guard has responded quickly and will be trained adequately,” Flø says.

Only people with a working or living permit in Norway, their family members, and others with a valid reason will be allowed to enter the country.

“We stopped a car with a woman from Finland, but we had to tell her that she was most welcome,” Kristensen smiles. The woman was working at the hospital in Kirkenes on the Norwegian side and had a resident permit.

The health sector, including most hospitals in northern Norway, very much depends on the foreign workforce, especially from Finland and Sweden.

In times of the coronavirus, health workers are all looked upon as heroes.

Norwegians could on Wednesday still drive into Finland but were thoroughly explained by the police at the checkpoint in Neiden that returning back to Norway will automatically require a two-week quarantine period.

From 12 am on Thursday, however, Norwegians will also be turned around by Finnish border guards.

All non-essential travel will be stopped as Finland will bring about severe restrictions to cross-border traffic. The Finnish government declared the state of emergency on Monday as an effort to combat the coronavirus.

The Foreign Ministry in Helsinki informs that cargo and return traffic will be allowed on the six cross-border roads to Norway in the north, including Neiden (Näätämö). The five others are Kilpisjärvi, Karigasniemi, Kivilompolo, Nuorgam, and Utsjoki.