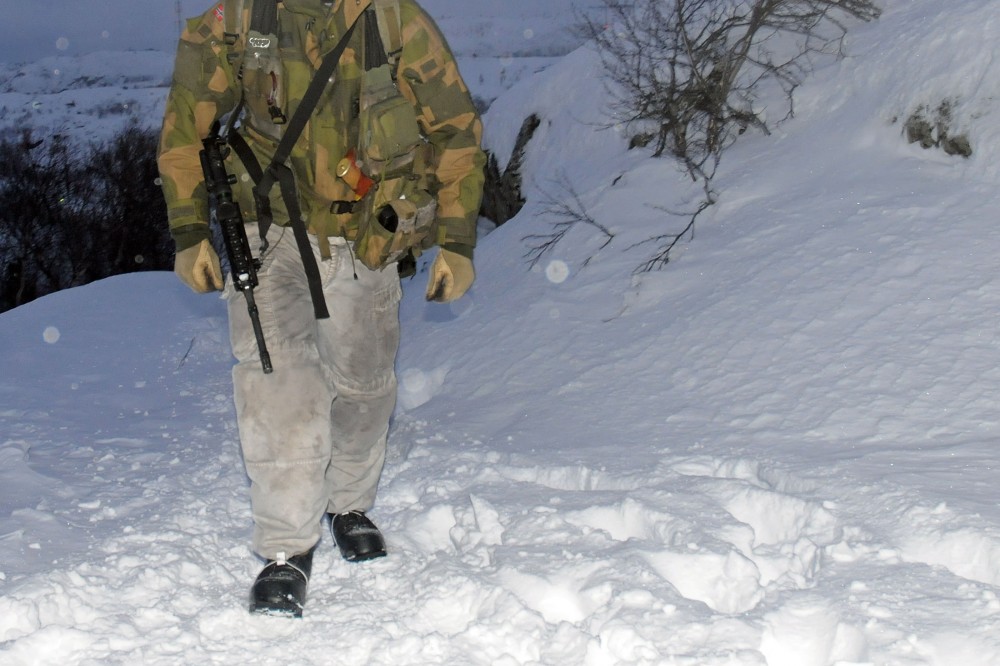 It is dark and snowy for the Norwegian border guard soldiers in December. Illustration photo: Thomas Nilsen

While military top officials and politicians strive for a 'brothers in arms' relationship between the two Nordic countries, it is still strictly illegal for a soldier to unintentionally cross the state border by a few meters.
Read in Russian | Читать по-русски
By

Lapland Border Guard investigates a case of a Norwegian soldier, from the Garrison of Sør-Varanger, on foot walked a few meters into Finnish territory on December 8.

It was the Norwegian police who told their Border Guard colleagues in Finland about the incident.

“Suspected territorial violation,” says the Finnish Border Guard when informing about the case.

Spokesperson for the Norwegian Army, Major Eirik Skomedal, says in a phone interview that the incident happened at the tripoint where the borders between Norway, Russia and Finland meet. The site, in the wilderness of the Pasvik valley, is on a hill and is clearly marked with a Three-Country Cairn made of stones. Trees are logged along the border, but there are no fences to stop trespassing.

In December, the sun is under the horizon and Polar Night darkens the partly snow-covered terrain.

“The soldier is not normally patrolling this area and had little local knowledge,” says Major Skomedal. He calls the incident “unfortunate”, and underlines that this should not have happened.

“We have filed reports to the police and the Finnish Border Guard,” he tells.

Norwegian soldiers main task in this area is to guard the border to Russia.

Over the last few years, Norway and Finland have strengthened the military cooperation. In September, the two countries’ defense ministers together with Sweden, signed a landmark defense agreement that includes joint operational planning on the North Calotte. Improved interoperability between the armed forces are a key part mentioned in the agreement.

While the defense ministry officials continue to develop a trilateral strategic planning group in the northernmost regions of the countries, Oslo and Helsinki will need to find a diplomatic solution to a single soldier’s few wrong-steps across an nearly invisible borderline in the middle of nowhere in the wilderness.

Last illegal border crossing by Norwegian soldiers into Finland happened in 2018 when a patrol on snowmobile accidentally drove some 400 meters into the territory of their Nordic neighbor. Then, the Finnish side was informed via diplomatic channels.