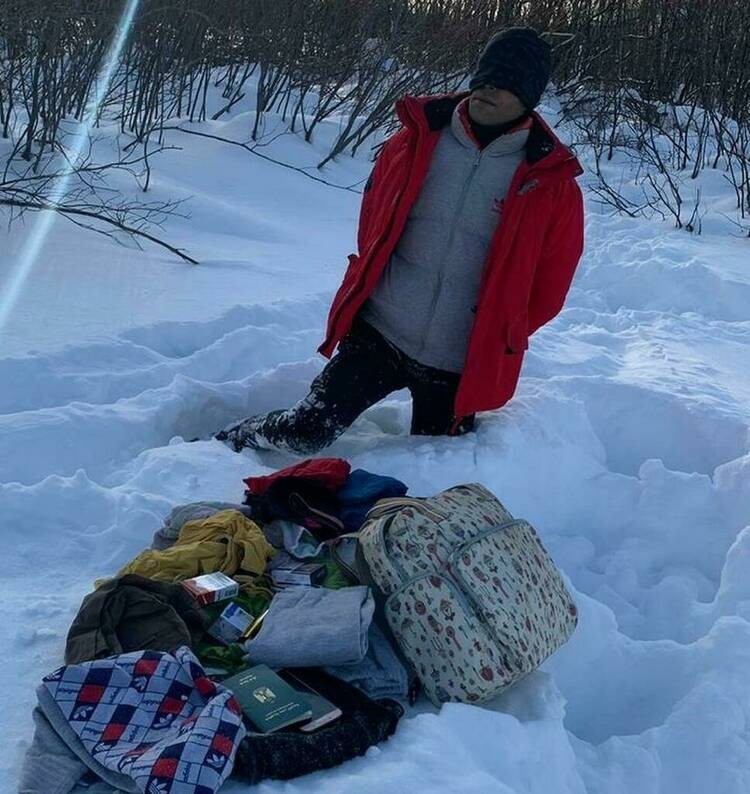 The three Egyptian citizens were detained after crossing into the border zone north of Zapolyarny. Photo: FSB Border Directorate

A criminal case is opened against a Syrian citizen suspected of organizing the mid-winter walk inside the Russian border-zone.
Read in Russian | Читать по-русски
By

FSB Border Directorate says in a press statement the three have admitted they were planning to illegally cross the border to Norway.

Photos attached to the press statement show two of the three handcuffed and with winter headgear hiding their identity. They carried rug-sacks with personal items, including passports, according to other photos published by regional media in Murmansk, like the B-Port and Severpost.

“I can’t comment on this particular case, but we are in general informed when there are such incidents,” said Norway’s Border Commissioner Jens-Arne Høilund in a phone interview with the Barents Observer.

“It is for the Russian authorities to follow up on such cases,” Høilund said. The Border Commissioner would not elaborate.

Russia has a several kilometers wide border zone all along its external border to Norway and Finland. Foreigners and Russian citizens without special permit are not allowed to enter this zone.

All three Egyptians got a fine after the Pechenga District Court ruled a guilty verdict for illegally entering the border zone. They are now released from custody and expelled from Russia, FSB informs.

The Syrian citizen under investigation for organizing the attempted border crossing to Norway is also charged for helping the Egyptians to enter Russia, for transit, illegally. The Syrian is living in Volgograd, but was detained in Zapolyarny, one of the towns closest to the Norwegian border.

Norway shares a 200 kilometers land-border with Russia in the north. Illegal border crossings in the terrain is very rare, although a few attempts happens annually. In 2018, the Barents Observer reported about seven such incidents.

Last “successful” border crossing in the terrain happened in November 2015 when a Chinese citizen walked across the border near Grense Jakobselv, the most remote located area of the border.