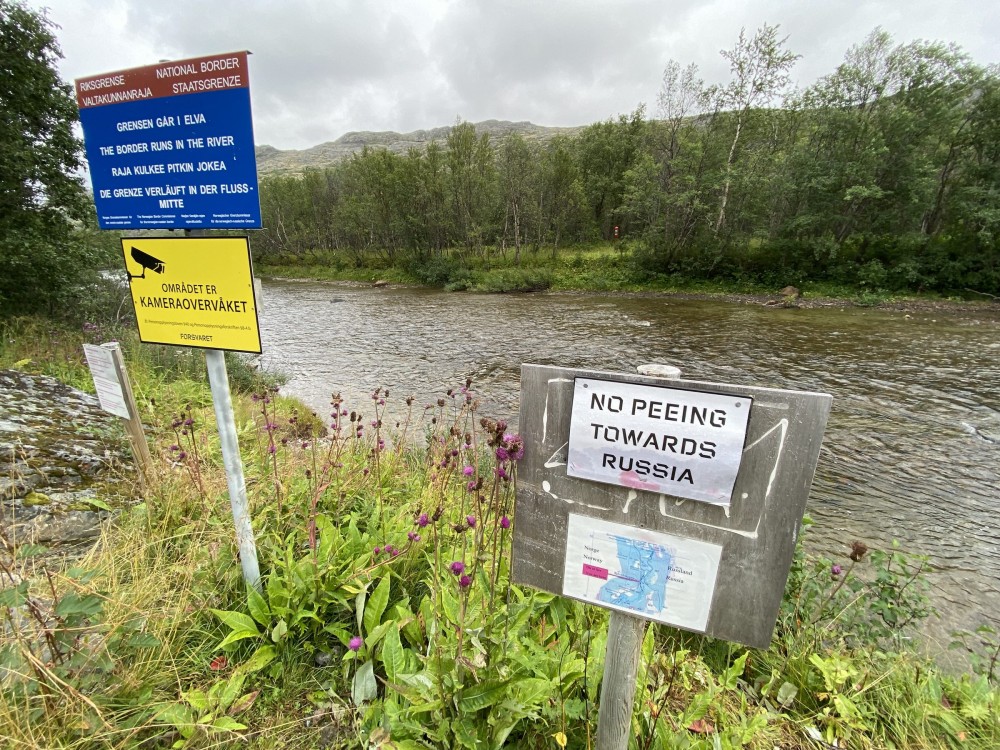 The border runs in the middle of the creek Grense Jakobselv. Photo: Thomas Nilsen

Insulting Russia by peeing towards the border could cost you from 3,000 kroner and up. And be aware, Norway’s military border guards are watching via CCTV cameras.
Read in Russian | Читать по-русски
By

A new sign is set up at one of the most frequently visited spots where visitors use to stop to take selfies. A Russian border pole is clearly visible on the opposite side of the creek.

The “No peeing towards Russia” sign on the road towards Grense Jakobselv is considered a preventive message. The borderline runs in the middle of the creek and at low water, the distance from the riverbank is only a few meters.

Norway’s Border Commissioner, Jens Høilund, says to the Barents Observer that he isn’t aware of any “specific events in recent times” leading to the need for such a sign.

Høilund says the military border guards are often in this area warning visitors before “such attempts turns into an incident”.

“Both the police, the border guards, and the border commissariat will try to prevent incidents that could lead to violation of the agreement with Russia, including insulting behavior,” Jens Høilund elaborates.

He encourages everyone who travels in the border areas to familiarise themselves thoroughly with the current regulations.

The Border Commissioner makes clear that incidents will be reported to the police.

Grense Jakobselv is a popular destination for both locals and tourists. The narrow road on the Norwegian side of the border is at some places directly on the river bank. Signs along the road clearly tells visitors how to behave.

The “No peeing towards Russia” sign, however, is new.

Norway’s dedicated law about the border with its eastern neighbor in the north is from 1950 and stipulates what citizens can do - and not do - in the near border areas. In §3, the law reads that no «offensive behavior along the border aimed at the neighboring state, or its authorities, are allowed.» Violations of this law can be punished with fines or jail for up to 3 months.

Asked about possible punishment for peeing, Jens Høilund informs that it is for the police to decide.

Jens Høilund says he is not aware of who has set up the peeing sign. Chief of Police in Finnmark, Ellen Katrine Hætta, also says she is unaware about who put up the sign.

“However,” Commissioner Høilund says, “it is set up in a place where tourists often stop, often the first stop after a long drive. It is likely that some have fallen for the temptation to urinate in the area.”

He reminds everyone that the area is under camera surveillance.

The location is an hour drive northeast of Kirkenes.

Norway’s 197,7 km long land border to Russia is likely the most peaceful border of all Russia’s external borders. Unchanged since agreed in 1826, the border is also a sign of peace; Norway is the only neighbor that Russia has not been at war with.

The border is also NATO’s northernmost landborder with Russia.