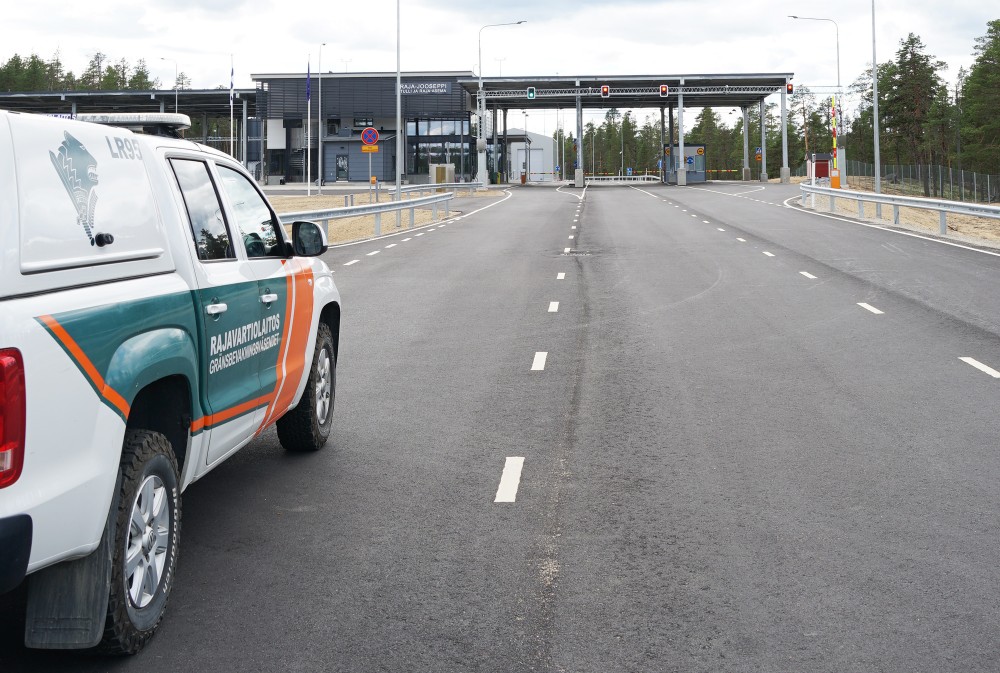 Quiet at Raja-Jooseppi, Finland's northern border checkpoint to Russia. In November, traffic here was counted to only 235 persons. That is eight people per day in average. Photo: Finnish Border Guards

Pathways for Russians traveling to Schengen-Europe changed substantially after Finland by the end of September restricted entry for travelers with tourist visas. More of the traffic now goes north via Norway.
Read in Russian | Читать по-русски
By

There were six times as many travelers across the Norwegian-Russian border in November compared with the combined traffic at Finland’s two northernmost checkpoints in Lapland.

Raja-Jooseppi and Salla checkpoints counted 3,752 travelers in September, a number that dropped to nearly a third in October with only 1,385 checks. November counted 1,130 people entering via the two border checkpoints between the Kola Peninsula and Finnish Lapland.

Like in Finland, also Storskog checkpoint to Norway had a sharp increase in traffic in the last week of September as thousands of young Russian men were fleeing Putin’s partial war mobilization.

But while Finland from September 30 denied Russians from entering or transiting the country if the purpose is tourism, Norway continued to keep its border open. Storskog checkpoint is actually today the only land border to Schengen-Europe welcoming Russians that have no purpose of the tour other than leisure or shopping.

The Norwegian government chose not to follow the recommendation by Finland’s Prime Minister Sanna Marin who called for a Schengen-wide decision on limiting entry into Europe by Russian tourists.

“It’s not right that at the same time as Russia is waging an aggressive, brutal war of aggression in Europe, Russians can live a normal life, travel in Europe, be tourists. It’s not right,” Marin told broadcaster YLE.

At Storskog, traffic increased in the period September to October and stayed stable high also in November with respectively 6,943 and 6,941 crossings.

Also, the number of entries by Schengen visa holders was higher than exits. October had nearly 1,300 more entries, and November saw a difference of more than 300.

Finland, in comparison, had a 63% drop in border traffic at Salla and Raja-Jooseppi the first month after Helsinki imposed restrictions on entry for tourist visa holders. In November, traffic was so low that Finnish and Russian border authorities now have agreed to reduce the opening hours at Salla. From early December, the checkpoint will only be open between 10 am and 2 pm.

895 people crossed the border at Salla in November, while 235 were counted at Raja-Jooseppi, the newly renovated border checkpoint on the road between Ivalo and Murmansk. That is on average eight people per day.

In November 2019, before the pandemic, traffic at these two checkpoints where 18,645.

The latest numbers obtained by the Barents Observer from Norwegian and Finnish border authorities show that Storskog in November had six times as many border crossings as Finland’s two northernmost checkpoints combined.

Visiting Norway’s border with Russia earlier this autumn, Minister of Justice Emilie Enger Mehl made clear that all changes in traffic are closely monitored.

“Border can be closed in a few hours’ notice, Mehl said to the Barents Observer.

Russians traveling with tourist visas can stay in Europe for a maximum period of 90 days. In other words, those avoiding mobilization by leaving in late September will have to return latest by Christmas.

The Norwegian border also facilitates for Russian crew members to fishing vessels still allowed to make port calls in Tromsø, Båtsfjord, and Kirkenes. Seafarers do not need Schengen visas as long as they are in transit to the port where the vessel changes crew.

Norwegian police in charge of immigration control say to the Barents Observer that very few of the travelers to Storskog are denied entry. Five persons in October and two in November.