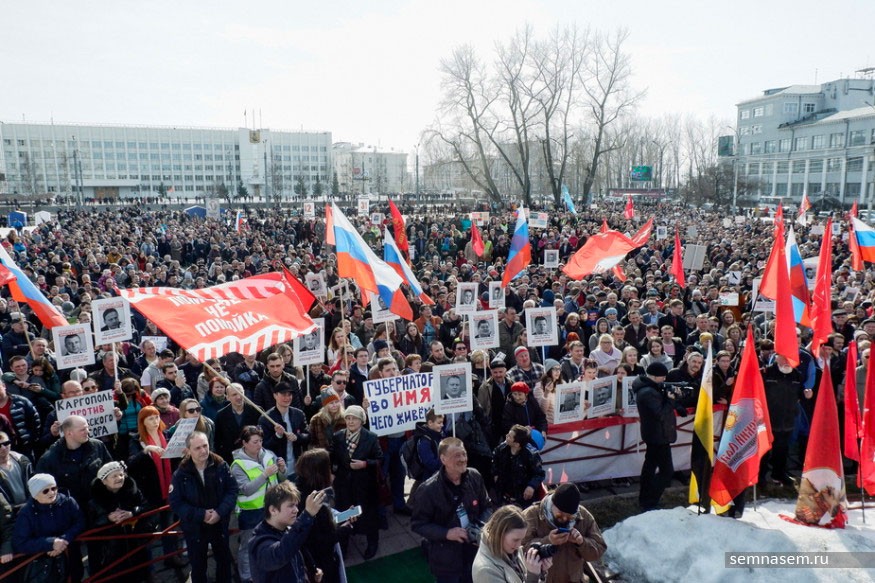 Police makes series of detentions and issues major fines in bid to stagger growing protests against the building of a major garbage dump in the south of the region.
Read in Russian | Читать по-русски
By

On 1 April, police detained Valery Dzyuba and the day after Vyacheslav Grigoryanets and Yuri Chesnokov. The detentions followed a protest in Shies, the site where a major waste deposit is being built for handling of garbage from Moscow.

About 100 activist in late evening 30th March made it into the construction area and soon ended up in confrontation with local guards. The activists demanded a closer look at conditions on site. «People must be allowed to know what is going on,» one of the activists shouted, a video posted by 7x7-journal shows.

Several more police detentions were made the following days. On the 4th April, Andrey Starkovsky was pulled in. And several people given fines. Three of the activists’ group sites on social media platform VKontakte were blocked, 7x7-journal informs.

Then, on the 7th April, thousands of people marched through the streets of Arkhangelsk, Severodvinsk and Syktyvkar and announced that they intend to rally «on a permanent basis».

A video posted by Support group for Vychegda shows how a big number of protesters in Arkhangelsk makes it thorugh a police cordon.

Several more police detentions followed. On the 8th April, seven people were taken in by police. Among them was Yevgeny Bogucharsky, chief editor of local newspaper ND29. Two of the activists were stopped as they were on their way to St.Petersburg, OVD Info reports.

Another five activists were detained on the 9th, and seven more on the 10th. Most of the detainees spent only a night or two in detention and then released. Several of them were given major fines. The biggest was given to Dmitry Sekushin, who will have to pay 200.000 rubles (€2750) for his leading role in the protest.

The protests against the major garbage dump in Shies are supported by overwhelming parts of local populations in Arkhangelsk and neighboring region Komi. That includes also local politicians. Member of the local Communist Party in Komi and representative in the regional parliament Oleg Mikhalkov was a leading figure in the protest that took place on the doorstep of the regional government building on 7th April.

«We seek decency for the people of Komi,» he underlined in an address delivered on site. «This is one of the biggest regions in the Russian Federation, one of the richest, but people are among the country’s most poor,»

A resolution that demanded the dismissal of leading regional officials, including the governor, was signed by the protesters and the put on the closed door of the government building, the video posted by Support Group for Protection of the Vychegda.

A big number of people have installed themselves in tents in the forest near Shies, and they say they will not leave despite growing police pressure

The dump will reportedly handle about 6 percent of the total volume of household waste produced in Moscow. And it is made for operations in a 20-years time span. It is located in a remote forested area near the border between the regions of Arkhangelsk and Komi.

Environmentalists say they facility could inflict serious damage to nature and contaminate the vulnerable wetlands in the area.