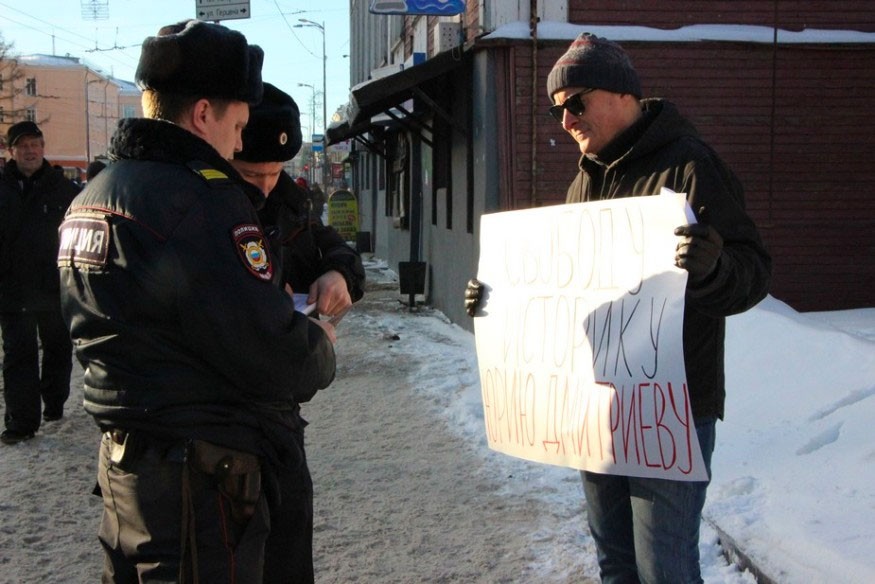 Quiet protesters were standing alone on the streets of Petrozavodsk, regional capital of Karelia, in a sign of support of Yury Dmitriyev, the imprisoned historian.

«Free Yury Dmitriev!» one of the posters said.

The protest was held on 28th January, the birthday of Dmitriev, and several of the activists held posters saying «Happy Birthday, Yury Dmitriyev!», 7x7-journal reports.

Dmitriev was arrested in his own apartment on the 13th December. He has since been behind bars in a prison in Petrozavodsk.

Prosecutors say they suspect the leader of Memorial in Karelia of having engaged in child pornography. However, representatives of Memorial believe the arrest is instigated by the authorities in order to discredit the organization. «It is a provocation», says Sergey Krivenko, a member of the Memorial International board.

The 60-year old Dmitriev is renown for is many years of research on Soviet-era political repression. He has published several books on the topic and was instrument in the discoveries of the mass graves of political prisoners in Sandarmokh and Krasny Bor.