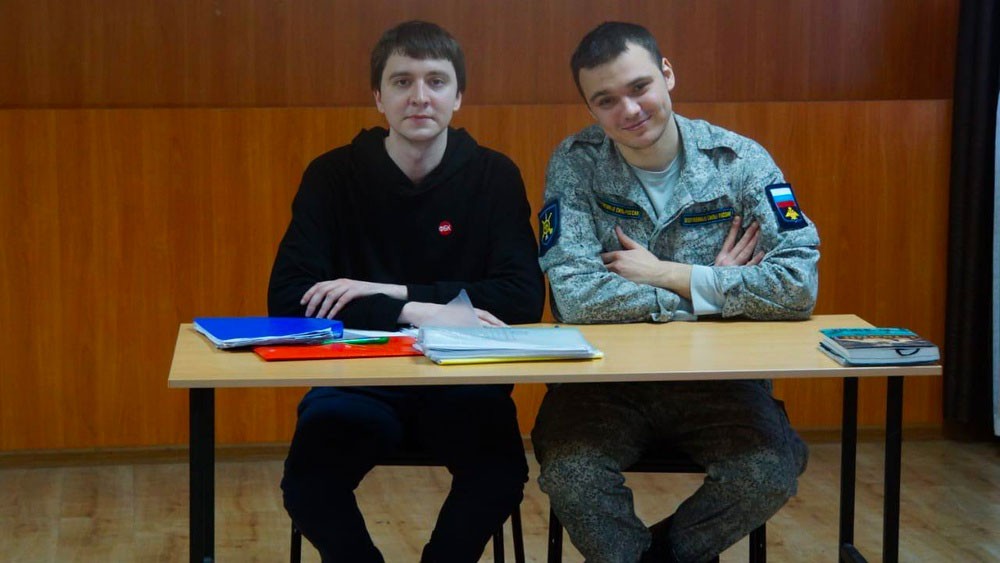 Ruslan Shaveddinov (right) is member of Aleksey Navalny's Anti-Corruption Fund and has been forcefully sent to Novaya Zemlya to serve as conscript soldier. Photo: Navalny.com

Political activist Ruslan Shaveddinov has been transferred to a desolate post in the militarized Arctic archipelago without telephone signal.
Read in Russian | Читать по-русски
By

Shaveddinov, the close associate of anti-corruption politician Aleksey Navalny, is no longer able to communicate with the outside world as the Armed Forces have relocated him to a desolate command post in the central parts of the archipelago.

The political activist has since late December last year been in the remote Arctic islands where he is forced to serve as conscript soldier. Military police on 23rd December broke into his Moscow apartment and forcefully brought with them the young man.

Aleksey Navalny and his Anti-Corruption Fund in March filed a suit against the Armed Forces after they for several weeks had been unable to get in touch with Shaveddinov.

It subsequently turned out that the activist had been moved to a remote command post 195 km from the Rogachevo airport. The location does not have telephone signal, the military representatives explained in a court document.

According to Navalny, it is Deputy Minister of Defense Andrey Kartapolov who is responsible for the forced deportation of Shaveddinov to Novaya Zemlya.

In Soviet times, being sent to a military-construction brigade at Novaya Zemlya was considered a punishment. The far northern archipelago is today again a strategically key area in the Russian Arctic. The 83,000 square km islands that stretches north of the 74th parallel was one of the Soviet Union’s main test areas for nuclear weapons. A total of 224 nuclear- and thermonuclear tests have been carried out at the archipelago.

Ruslan Shaveddinov is a close associate of Aleksey Navalny. He has served as Navalny’s press secretary and headed one of the online Navalny Live shows and also taken part in the anti-corruption activities of the opposition leader. Along with Navalny, he has been imprisoned following anti-government street rallies.

He is reported to have a disease that makes him unfit for military service. However, Russian authorities argue that Shaveddinov for a long time evaded conscript service and was detained and taken to Novaya Zemlya on a statutory basis. A medical test showed that he is fit for service, TASS reports.