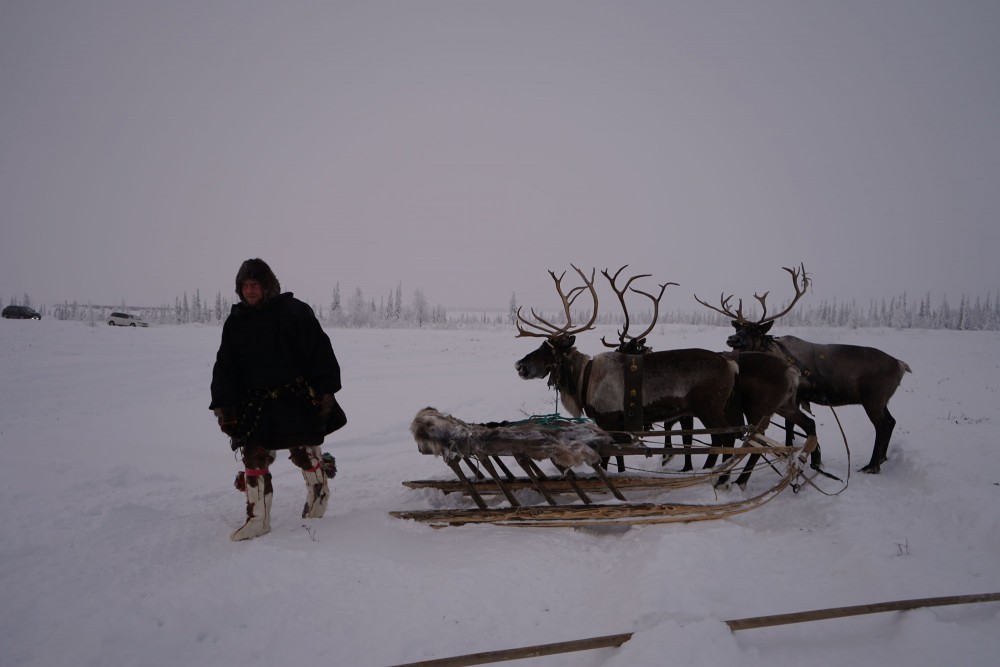 Herders in Yamal are losing their animals. Photo: Atle Staalesen

Herders in the Yamal Peninsula despair as thick layers of ice prevent their animals from getting access to the indispensable lichen.
Read in Russian | Читать по-русски
By

Locals in the far northern Russian region believe between 60,000-80,000 animals might have died of starvation over the past few months. The tragedy follows the formation of a thick layer of ice across major parts of the Yamal tundra.

Reindeer normally manage to dig through the snow to access its favorite food, the lichen, but this year the ground is covered by unbreakable ice.

According to herders in the area, the thickness of the ice is at least three centimeters.

“The reindeer are not able to get food, and the weak animals quickly die while the remaining parts of the herds lose their strength,” local herder and politician Eiko Serotetto told newspaper Neft.

“If this continues, 300 families in the Seyakha village will be completely without livestock — all animals will die,” Serotetto says.

A similar situation was reportedly experienced in 2014.

Several herders believe the expansive oil and gas industry is to blame for the situation. Through the whole winter, icebreakers have crisscrossed the Gulf of Ob as part of the development of new major industrial projects in the region. Among them is the Arctic LNG 2, the major natural gas project currently under development on the eastern shore of the Ob.

The open waters generate steam that drifts over the tundra and subsequently crystalizes on the snow, the herders argue.

However, the theory is rebuffed by researchers. The ice layer is rather part of a natural phenomenon, and likely connected with climate change, explains Vladimir Semyonov, Head of the Laboratory of Climatology at the Russian Institute of Geography.

“The icebreakers are definitely not the reason for the ice formation. But the climate is changing globally, the temperatures increase,” he told Neft.

Temperatures in Yamal and surrounding Arctic areas have over the past years seen a dramatic increase. The year 2020 was the warmest on record, and parts of Yamal, Taymyr and other Russian Arctic territories had average temperatures up to 7 °С above normal.

A similar difficult situation for reindeer have been experienced also in other parts of the Arctic. In northern Norway, a major rescue operation was initiated in winter 2020 to feed reindeer that risked starvation. In a major air-bridge, up to 250 tons of food was flown into the affected areas by helicopters.

As many as 160,000 animals could have starved to death without the rescue. Deep snow on top of a layer of ice was the reason for the situation.

A rescue operation is now also underway in Yamal. Head of the local municipality Andrey Kugaevsky confirms that 40 tons of feed-stuff was flown in to Sabetta, the natural gas town north in the peninsula, in early January. The herders are also provided fuel to get the feed-stuff to their animals, he says.

The situation is believed to be the worst in the Seyakha area west in the peninsula. But the situation could possibly spread to the whole region.

According to Eiko Serotetto, representatives of the reindeer herders themselves must be involved in the development of a strategy for the indigenous industry.

“Unless we make a full-fledged support strategy for the herders, nothing will change,” he underlines.

“Today, we are temporary helped by the oil companies, and they are eager to tell the world about that. So, today they helped us and feeded us, but tomorrow — what will the reindeer herder have to eat then? He will be left with nothing,”  Serotetto argues.

The number of reindeer in the Yamal Peninsula has grown significantly over the past decades and more than 750,000 animals are now believed to live in the region. Regional authorities have made several attempts to reduce the stocks and limit migration, including with the establisment of regulated «reindeer parks». According to the authorities, the managers of the parks will get stronger ownership rights over the land, but in return be subjected to strict regulations on animal migration routes and land management.

“This organizational form will promote a rational use of the pasture lands by means of optimization of migration routes, First Deputy Governor of the Yamal-Nenets region Aleksey Sitnikov said in 2018.

About seven percent of the regional stocks are owned by state and local authorities and about 34 percent by private collectives and companies. The remaining 60 percent are owned by family-based herder communities.

The growing number of animals in Yamal has come together with the expansion of the oil and gas industry. Companies Gazprom and Novatek now operate several major gas projects in the Yamal Peninsula, among them the Bovanenkovo field and the Yamal LNG. The projects all include major developments of infrastructure like roads, airports, railway and pipelines.

More is under planning, and much of it will be in conflict with the reindeer herders.