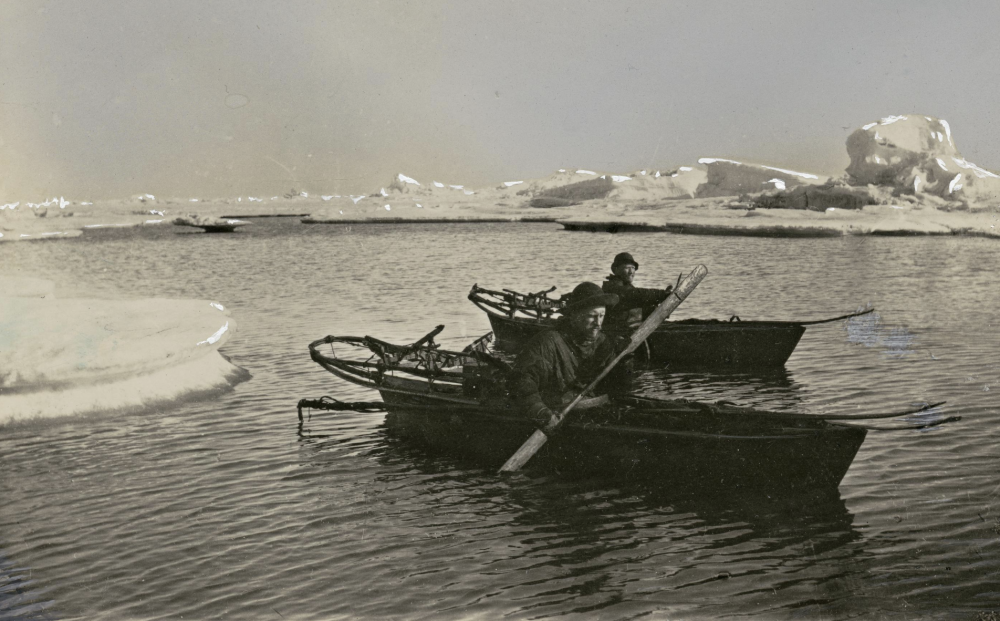 Fridtjof Nansen and Hjalmar Johansen in kayaks at Franz Josef Land in July 1896. From the photo archive of the National Library of Norway

Employees of the Russian Arctic National Park discovered that the peninsula on the northern edge of Eva-Liv island at Franz Josef Land wasn’t a peninsula at all, but a glacier stretching into the sea that now has melted.
Read in Russian | Читать по-русски
By

Only a small portion of the glacier is still visible above the sea, while a three-kilometer-wide strait has formed.

What previously was believed to be a small peninsula, formed like a hare’s ear, is simply not there anymore, drone images from this summer shows.

The island is the northernmost on Russia’s archipelago of Franz Josef Land, a part of the Arctic where climate changes make radical redrawing of geographical facts as glaciers withdraw.

It was the two Norwegian explorers Fridtjof Nansen and Hjalmar Johansen that first came to the island in 1895.

Nansen, who wrongly believed it was two separate islands connected with a glacier, decided to name them after his wife Eva and daughter Liv. Today, the official name is Eva-Liv island.

Nansen and Johansen spent the winter 1895/96 on the northern tip of Franz Josef Land after they had left their ship “Fram” in an attempt to reach the North Pole on skies.

In May 1896 they left their winter-shelter and continued south along the islands of the archipelago in two kayaks until they reached Cape Flora in mid-June. There, they met the British explorer F. G. Jackson, who took them back to Norway on board his ship “Windward” which made port call to Vardø in August the same year.

Russian National Park informs about the vanishing glacier that formed the small peninsula. The first melting was discovered in 2017, but this summer while exploring the area in a zodiac, it became evident that there was no land under the glacier.

“Due to climate changes, the forms of the glaciers at Franz Josef Land are rapidly changing,” the national park Russian Arctic writes on its portal. The staff says they are expecting to discover many more geographical changes in the time to come.

Last fall, the Barents Observer reported about the discovery of a new island north at Novaya Zemlya that previously had been hidden underneath a glacier now rapidly retreating.

Also at Norway’s Svalbard archipelago is a melting glacier about to change the landscape. Like at the southern part of Spitsbergen island, where the front of Hornsundbreen (Hornsund glacier) is retreating every year and will eventually open a new strait between the Barents- and Greenland Seas.