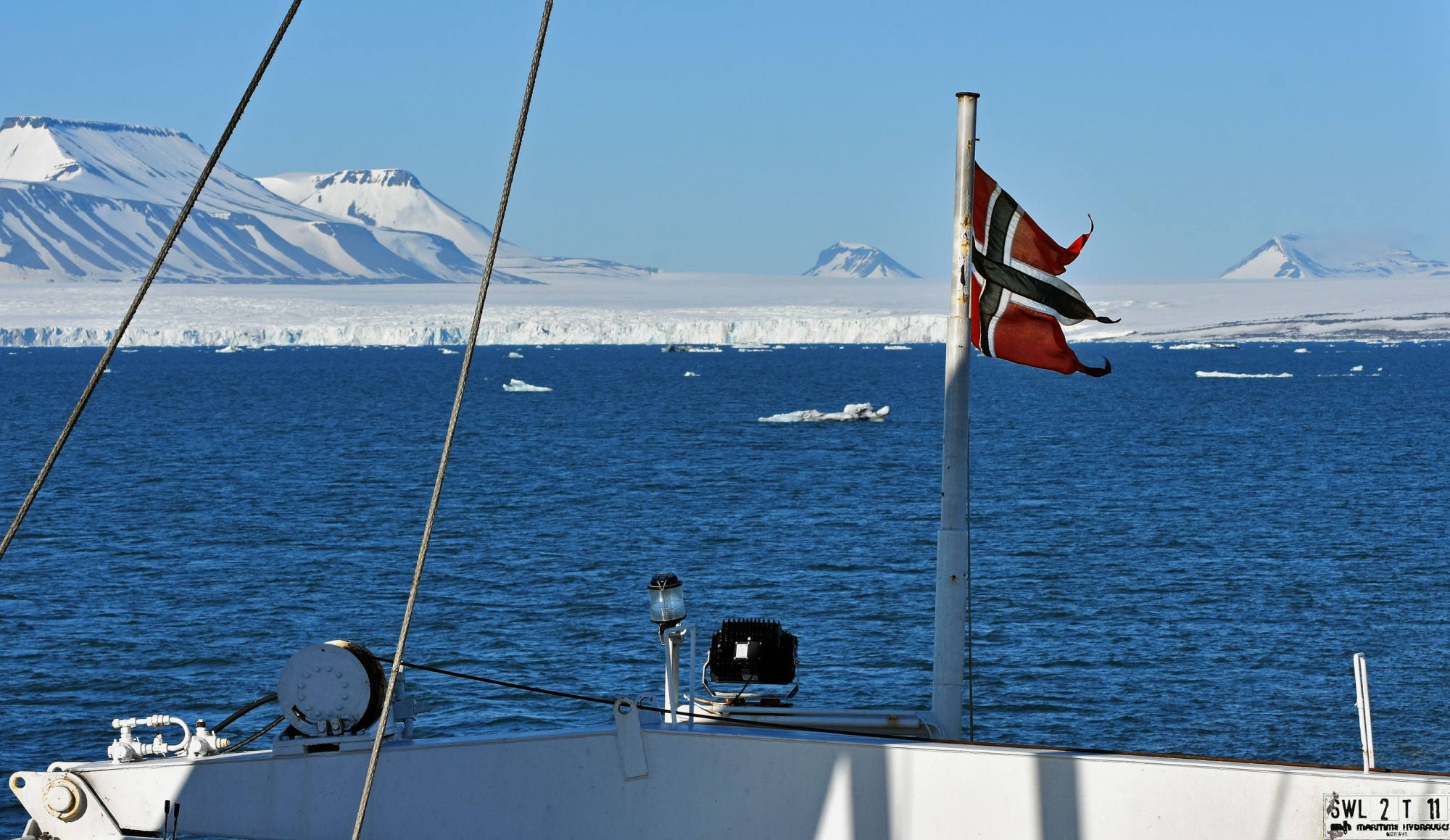 The Hornbreen glacier debouches into Hornsund on the western shores of Spitsbergen. Photo: Thomas Nilsen

The front of Hornsundbreen is retreating every year and will eventually open a new strait between the Barents- and Greenland Seas through the island of Spitsbergen.
Read in Russian | Читать по-русски

Radar soundings made by Polish researchers in the area of Hornbreen-Hambergbreen glaciers show that there are no obstacles that would hinder the flow of water though the channel.

Svalbard, the fastest-heating place on earth, is a live laboratory for everyone studying the dramatic effects of the climate crisis. While world leaders travels to New York on September 23 for the UN Climate Action Summit to find ways to limit the global temperature to 1.5 °C above pre-industrial levels, temperatures on Svalbard have already risen by 4 °C.

At Spitsbergen, the largest island on the archipelago, both permafrost and glacier are melting in a speed nobody could predict a few years ago.

Since 1957, Poland has operated a research station at Hornsund, the southernmost fjord on Spitsbergen. Researchers here are eye-witnessing the melting Arctic. Although protected by law, no other nature parks of such size in the world is changing more dramatically than Sør-Spitsbergen National Park.

«The conclusion coming from the surveys is that the glacier bed is below sea level and no obstacles have been identified that might prevent connection of the Barents Sea and Greenland Sea when glaciers have retreated,» says Mariusz Grabiec to the Barents Observer.

Grabiec is researcher with the University of Silesia and the Polish Centre for Polar Studies. He tells that the fjord of Hornsund is expanding about 3 square kilometers every year as the glaciers melts away. 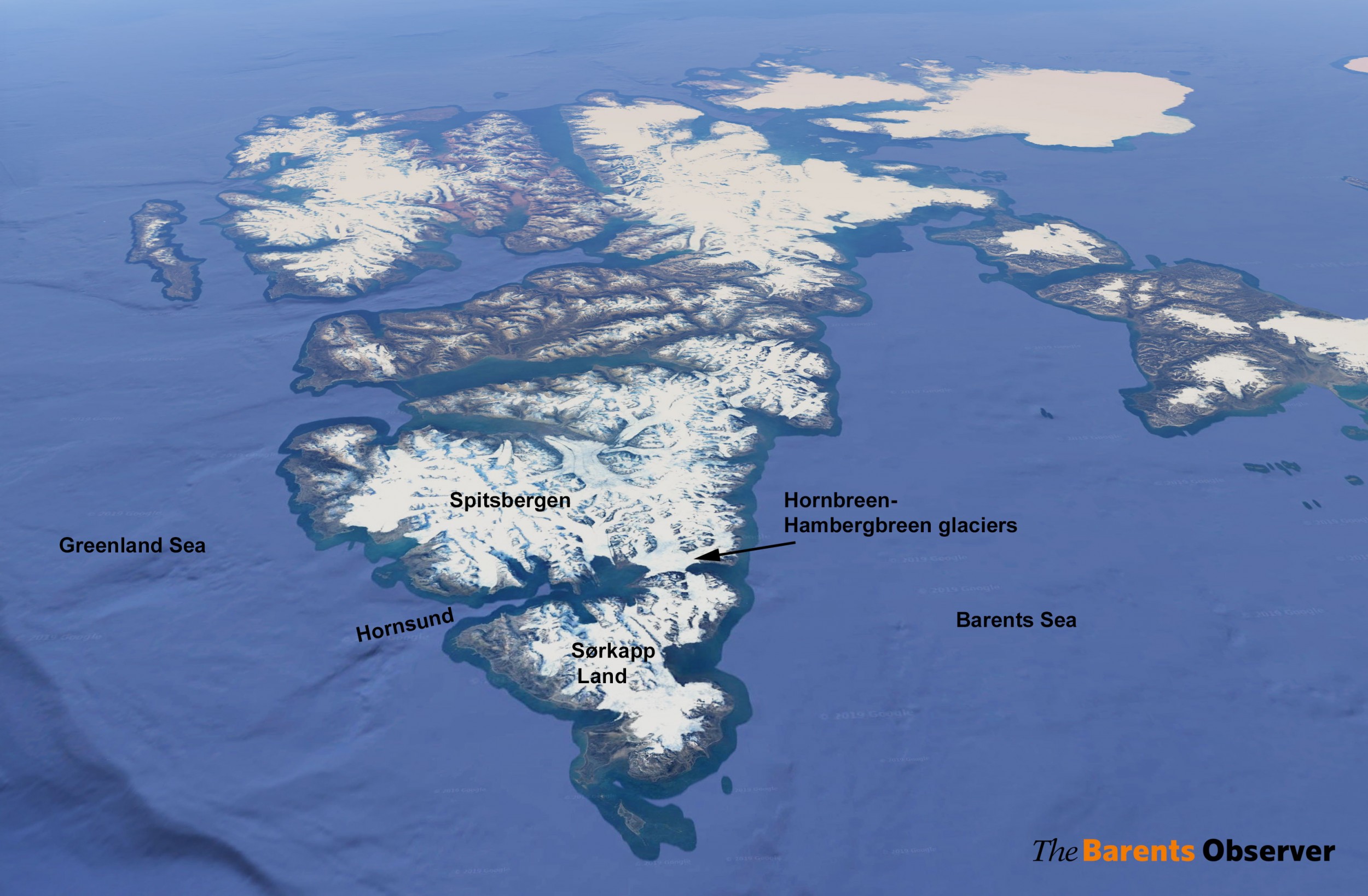 Named Hornsundbreen on the west side, the glacier is connected with the Hambergbreen on the east side towards the Barents Sea.

Mariusz Grabiec has for the last 20 years studied glaciers on Svalbard and is deeply concerned about what he now sees.

«In southern Spitsbergen the retreat in the 21st century accelerate three times in comparison to the first part of the 20th century average rate.»

The team of researchers of the University of Silesia made radar soundings over a distance of 40 km in two spring expeditions in 2013 and 2014 over the Hornbreen-Hambergbreen system allowing them to see the glacier depth and subglacial topography.

It is when reading the radar soundings the team concludes that the land actually consists of two islands; Spitsbergen to the north and Sørkapp Land to the south.

«Based on the last few decades of glacier retreat rate, we estimated that the strait opening might happen sometime between 2055 and 2065,» Mariusz Grabiec tells.

«Having in mind the deglaciation rate in this area is getting faster, the glacier may disappear earlier.»

The front of Hornbreen has retreated by more than 14 kilometers since the end of the 19th century. The distance between Hornsund and the Barents Sea on the east side is now less than 6 km.

When separated, the southern part of Spitsbergen will become separated and will thus form the fourth largest island on the Svalbard archipelago. Sørkapp Land (South Cape Land) is 1260 square kilometers.

The Polish researchers say the ambiguity inherent in the word ‘sound’ is therefore becoming very fitting for Hornsund - a fjord which is gradually becoming a strait.

Changing Arctic geography is not unique for Svalbard.

In the period 2015-2018, Russian navy researchers discovered more than 30 islands, bays, apes and straits at Novaya Zemlya and Franz Josef Land. The latest in August this year when five new islands separated from others at Franz Josef Land. The biggest was 54 square kilometers, the Barents Observer reported.

Norwegian broadcasting NRK could recently tell about a new 10 square kilometers island separating from Nordaustlandet further north on Svalbard. What previously was believed to be a peninsula, suddenly became an island as the glacier melted, researchers at the Norwegian Polar Institute discovered after studying satellite images of the area from this summer.

You can help us report about the climate crisis…