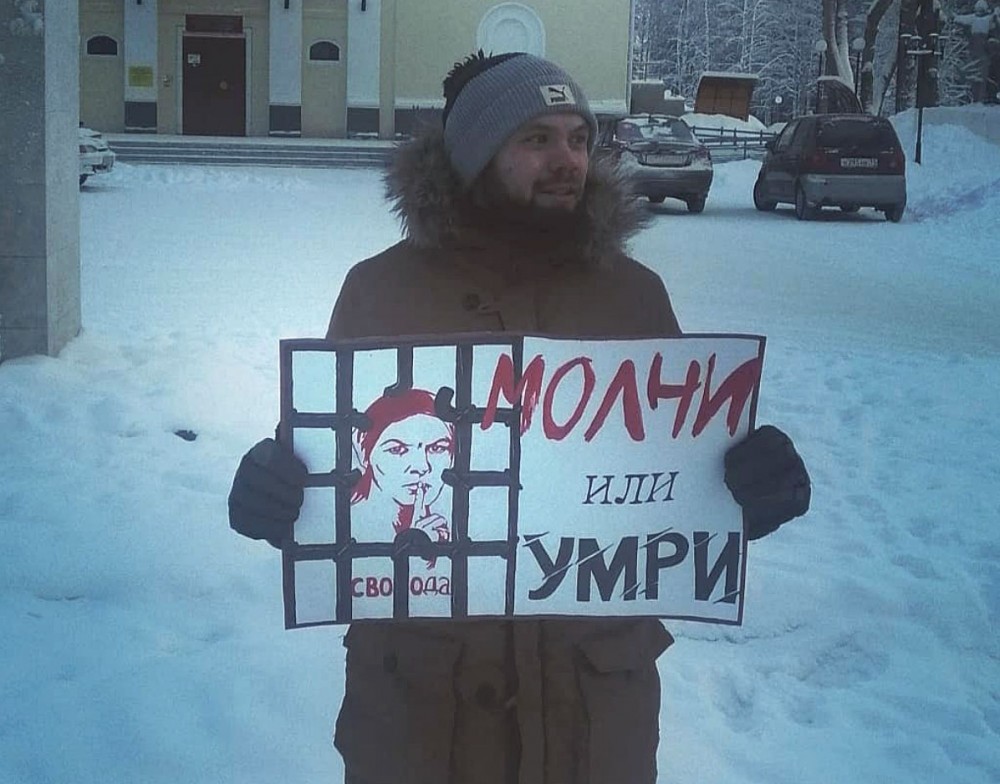 Nikita Tushkanov has spurred the wrath of local authorities in the small Komi town of Mikun after his single-person protest in the town square.
Read in Russian | Читать по-русски
By

Tushkanov a teacher of history and social sciences, on the 23rd of January stood in the downtown square for an hour with a poster with the text “Be silent, or die.”

“I wanted to express my civil position on the situation in the country with regard to freedom of speech,” the 26 year old teacher told 7x7-journal. “It is not common here to express one’s private opinion,” he added.

The protest took place at the same day as nation-wide rallies in support of Aleksey Navalny.

The silent demonstration soon triggered a serious reaction from local authorities. A policeman quickly showed up and requested Tushkano to follow him to the local police station. The teacher refused, but was that same evening approached by several officers.

Town authorities then sent the local chief of education to the school where Tushkanov teaches for an “extraordinary meeting,” where the teacher was told that he was “a bad example for the school kids.”

Tushkanov now believes he will lose his job.

“They are trying to persuade me to submit a resignation, if not they will fire me,” he says in comment posted at Instagram.

“I have felt the full amplitude of this system that hates any opinion that is not in line with its official line,” he underlines.

Local head of education Yelena Pekach confirms to 7x7 that she has met with Nikita Tushkano, but says she has not requested his resignation.

Many schools kids have expressed support of their teacher. But Tushkanov admits that most school colleagues have turned against him.

“Among the teachers I now feel like an outlaw,” he explains.

Rallies in support of Aleksey Navalny were last weekend held across the country. They have been met by harsh reactions from the authorities, who accuses the organizers of deliberately exploiting under-aged school kids.

TikTok received a warning from the censorship agency Roskomnadzor to block videos showing youngsters filming themselves removing Putin’s portrait from classroom walls and replacing it with Navalny’s photo.

Other warnings from the Roskomnadzor targeted YouTube, Vkontakte and Instagram, calling on them to remove content containing “calls for children to participate in illegal mass events.”

The federal Ministry of Education urged parents to hinder their kids from attending Saturday’s demonstrations. “We all know what childish curiosity, harmless prank and posturing are, but in the hands of unscrupulous adults, all this can drag a child into illegal actions and turn into a very deplorable situation,” the ministry writes and calls on all parents to watch their children.

The ministry encourages parents to spend the weekend together with the young ones. “Watch a movie, walk in the forest, go ice skating, play table games or gather for cooking with family members,” are some of the suggestions from the Education Ministry.

New nation-wide demonstrations in support of arrested politician Aleksey Navalny are to take place on the 31st of January.