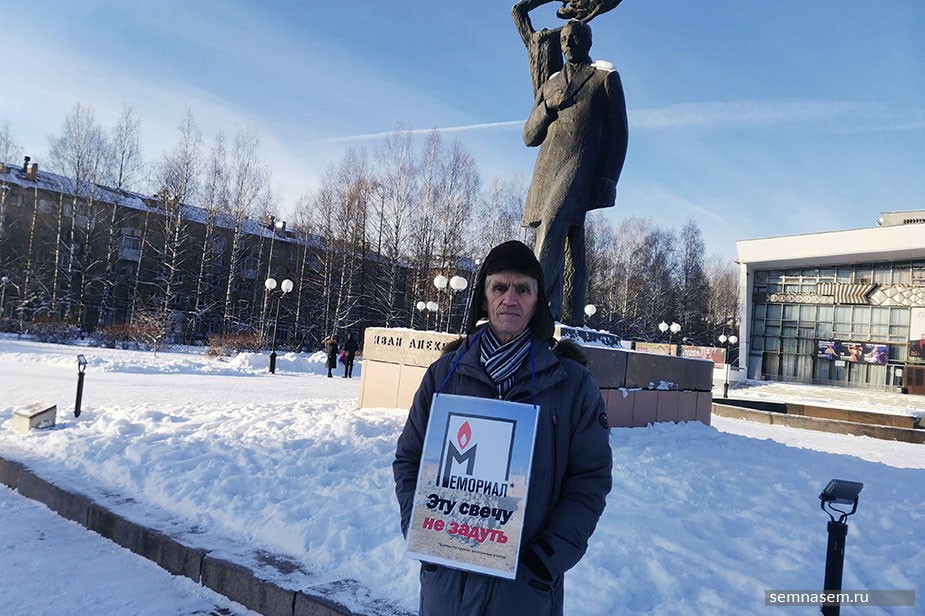 Pensioner Sergei Kharyukov fears a modern-day return to the horrors of the Stalin era. On a cold day in November he stood at the central square of Syktyvkar in silent protest against the forced closure of human rights organisation Memorial.
Read in Russian | Читать по-русски
By

The Komi Republic is one of many Russian regions that housed Stalin’s GULAG camps, and Sergei Kharyukov himself has relatives that fell victim to brutal Soviet repression.

Over several decades, hundreds of thousands of people suffered in the far northern Komi camps, and many of the region’s current biggest companies stand on the bones of forced labor prisoners.

Last Sunday, the pensioner went to the Teatralnaya Square in downtown Syktyvkar, the regional capital, to express his protest against the ongoing crackdown of Memorial.

“This candle must not be blown out,” reads the poster that Kharyukov held in his hands. It refers to the burning candle in Memorial’s logo, and the light that the organisation has shed on Soviet repression.

According to Kharyukov, Russia is now taking “firm steps back to the year of 1937.”

“Not so many people know about Memorial, and those people are getting less and less from year to year. But it is important that we remember those dark times, because our history is cyclical,” he told 7x7-journal.

The human rights organisation has since the 1980s been instrumental in revealing the horrors and repression undertaken by Stalin and the KGB. In early November, the Russian General Prosecutor filed a case at the Supreme Court on the closure of the organisation.

According to the prosecutors, Memorial must be closed down following its unwillingness to mark public information materials with the foreign agent label, a requirement imposed by the Justice Ministry on all organisations and individuals listed as so-called foreign agents. Memorial was originally added to the list already in 2013. Over the years, it has been divided in several units and regional organisations.

The move from the General Prosecutor has triggered harsh reactions across Russia, as well as abroad.

In a statement published by the Free Historical Society, several hundred Russian historians call on the authorities to halt the repressive actions against Memorial.

“For us as professional historians, the threat to close the International Memorial is an issue of grave concern,” the statement reads.

“We work in various spheres, we have various interests and expertise, but we are united about one thing - the recognition of the huge importance of Memorial’s research and education activities for science and for society.”

According to the historians, Memorial is a unique example of a public initiative “created to restore the memory, honour and decency of people suffering from state terror and repression against the individual.”

“The case on the closure of Memorial reflects the aspiration of certain state officials and law enforcement authorities to tear out an uncomfortable page from national history,” the historians say, and argue that they can be compared with the people that ruined architectural monuments and documents in the years between 1920-1940.