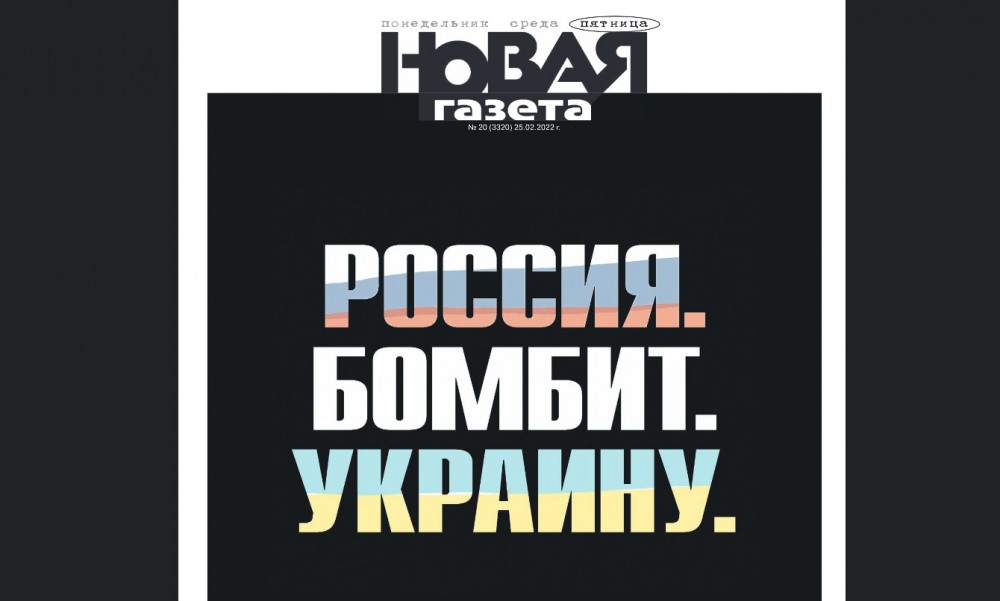 Independent newspaper Novaya Gazeta is among the media that are threatened by blocking. Photo: Screenshot of Novaya Gazeta's issue of 25th February 2022.

Russian censorship authority Roskomnadzor has added several more news sites to its list of prohibited media. On the 28th of February, the state regulators blocked news sites Current Time, Krim-realii, New Times, and several more media that report on the war in Ukraine.

On the list is also Interfax Ukraine, Gordon, journal Correspondent.

The blocking comes on the request of the Russian General Prosecutor, the censorship authority informs.

In addition, the state media watchdog has issued warnings to Novaya Gazeta, MediaZona, Dozhd, Echo Moscow and others.

Novaya Gazeta on the 28th of February saw Roskomadnzor blocking a story that describes war action.

“We consider this an act of military censorship, but continue to inform our readers about developments,” the newspaper reports.

On the 26th of February, the Russian Ministry of Defence accused Novaya Gazeta of spreading fake information.

“Unfortunately, certain Russian media and first of all Novaya Gazeta do not listen to us [and] actively spread fake information provided by dope-smoking gang of nationalists and the Ukrainian Security Service,” the Russian military said.

The announcement from the ministry is referred to by MediaZona. The ministry website has for several days been down following a hacker attack by Anonymous.

All the blocked media were reportedly in advance warned that their news reports on the war are not in line with instructions from the authorities.

As Russia launched its massive war offensive on Ukraine, Roskomnadzor announced that the media is allowed only to refer to “official Russian sources” in reports.

According to Moscow, the incursion in Ukraine is nothing but a “special military operation that aims at protecting the regional population.”

There are increasing problems with using Twitter, Facebook and Instagram in the country. Several of the services are either becoming unavailable or working increasingly slow. Also TikTok is requested to remove “illegal information” about the war.

The limitations of Facebook comes after the company decided to take action against the accounts of state media like TV Zvezda and RIA Novosti.

On the 28th of February, Roskomnadzor also issued a warning against publishing Google adds with links to information about Russian losses in the war.