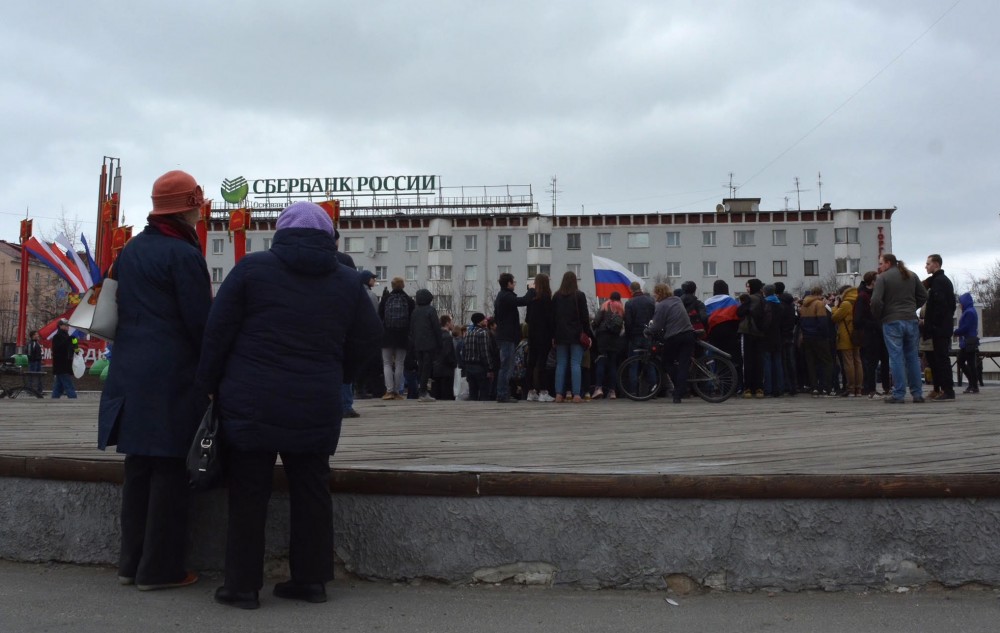 Shortly after Irina Bystrova had posted an anti-war message on her social media page, FSB agents came to her home and detained her. The cultural school teacher from Karelia is one of thousands of Russians arrested and punished for opposition to war.
Read in Russian | Читать по-русски
By

“They came here and took our computer and telephones, even my mother’s,” Bystrova says in despair as the security service officers force the middle-aged woman to the police station.

“Please, let at least my mother keep her phone,” Bystrova cries. She has health problems and asks for mercy. She also fears that her ageing mother will not cope alone without care. A neighbour records the detention on his phone, and the video is made available on local newspaper PTZ-Govorit.

FSB officers detain Irina Bystrova at her house in Petrozavodsk. Video from VK

Irina Bystrova is artist and cultural school teacher in Petrozavodsk, the regional capital of Karelia, and strongly opposes the war against Ukraine. In March, she condemned the attack on the neigboring country on her VK page. The detention happened shortly afterwards.

In early June, it became known that Bystrova had been sent to a psychiatric hospital. She is also charged with having spread “fake information” about the Russian Armed Forces and for “justification of terrorism,” Activatica reports on Telegram.

Irina Bystrova is one of many thousands of Russians now brutally punished for their opposition to the war. According to ODV-Info, the independent human rights media portal, a total of 15451 detentions of war opponents have been made since the onslaught of 24th of February.

Many of them come from north Russian regions.

In late May, Tatiana Savinkina was fined 30,000 rubles (€505) for having distributed anti-war leaflets to her neighbours in a house block in Petrozavodsk. The 77-year old woman, who has served 30 years in the regional Interior Ministry, was punished for having “discredited the Army.” Supporters soon helped Savinkina pay the fine, 7x7-journal informs.

In that same region, Anna Boykova was punished with 50 hours of community work after she on 9th of May re-published an anti-war message in a closed Telegram channel. Boykova is known for having established the VK page “Netipichnaya Pitkyaranta” (Untypical Pitkyaranta). Since its launch in 2017, the news page have gotten 4,700 followers in the small town of only about 8,000 inhabitants, 7x7-journal reports.

On the 9th of May, photographer and former member of the local Navalny office in Arkhangelsk Ruslan Akhmetshin was detained as he was heading towards Armenia. He is now charged for having worked for the “rehabilitation of Nazism” and for having “downplayed the role of the USSR in the Second World War.”

“Everyone that knows me understands that this is completely absurd,” Akhmetshin writes in an open letter sent from a pre-trial detention facility.

The FSB has brutally cracked down also on several of Akhmetshin former colleagues. In late March, journalists Darya Poryadina and Aleksandr Peskov were subject to a rough house search and threats from the police, after which they fled the country.

The same applies to Violetta Grudina, the politician and former head of the Navalny office in Murmansk. Although abroad since late 2021, Grudina was in June put on a federal wanted list for “fakes against the Army,” “extremism” and for having violated anti-COVID restrictions, she writes on Telegram.

Also activist Aleksei Ivanov from the Komi Republic is wanted by Russian police. Following a rally on the 24th of February, Ivanov called representatives of Russian law enforcement authorities ‘Fascists’.

“I believe I insulted nobody, because our country actually is Fascist. Consequently, so is also the police” he told SOTA. In a subsequent court case, Ivanov demanded that the judge address him in the Komi language and that the court documents are available in Komi.

He has now fled the country.

In the same region, kindergarten teacher Lyudmila Zaychenko negatively spoke out about Vladimir Putin and the war against Ukraine whereupon she was fined 30,000 rubles for “discrediting the Armed Forces,” 7x7-journal reports.

And in the small Komi town of Mikun, history teacher Nikita Tushkanov has been fined 90,000 rubles (€1,514) in three cases that involve “discrediting the Armed Force,” “demonstration of Nazi symbols,” and “disorderly and insulting behaviour.”

Tushkanov is a native speaker of the Komi language and descends from GULAG prisoners that were forced to move to the far northern region to build railways.

Tushkanov was fired from his job in the local school already early 2021 for a single-person rally in support of free speech.

In an interview published at telegra.ph, he describes how teachers in local schools are confronted with the propaganda of patriotism and Putinism. “History classes in school is politics turned towards the past; they write about the reunification of Ukraine with the Russian state, […] that Russia is such a good country and that we do not give up on our soldiers, that the Crimea is our’s and that Ukraine always has been part of Russia,” he explains.

According to Tushkanov, “we are moving toward the year 1937.”

But he does not want to move. “I love Komi, the culture, the history of the republic, my native Komi language. This is definitely my place, and I do not want to move only because someone represses me for my political views. I want to help my small native people develop,” he underlines.