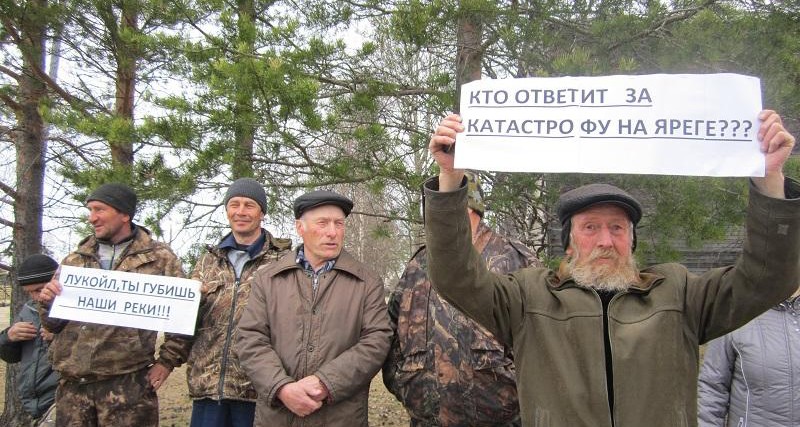 Locals rally against oil pollution. "Lukoil, don't destroy our river" reads the sign to the left. Photo: Committee Save the Pechora

Contamination increases as the snow and ice melts along the Izhma River in the Pechora River basin.
By

“Komi Government has a duty to protect the interest of its citizens, not to cover up the sins of oil companies,” says Valentina Semyashkina, member of Committee Save Pechora, in an email to the Barents Observer.

She doesn’t at all believe that the oil leak could come from an old exploration well abounded before 1950, as earlier said by the regional Government.

Last Friday, residents in the Izhmy district held a rally to protest what they consider is regional authorities’ weakness for Lukoil.

Slogans were reading “Save mother nature”, “Lukoil, you destroy our river,” “Who is responsible for the catastrophe on Yarega” and “Lukoil, Izhma River is not a toilet”.

The locals are scared to see how the oil spill spreads downstream the river system. First discovered in the Yarega river, the oil now also contaminate the larger Izhma river and could eventually spread to the larger Pechora river that ends up in the Barents Sea north of Naryan-Mar in the Nenets Autonomous Okrug.

Reported in early April, the oil spill could amount to several hundred tons, environmentalists fear. Shortly after the oil spill was discovered under the snow, regional authorities in the Komi Republic posted a statement assuring they had control of the situation.

Committee Save the Pechora dismisses explanations from the Komi Republic’s officials that old oil wells from before 1950 started to leak.

“Old oil wells can’t by themselves give a fountain of oil in such large volume. Some external intervention has happened,” says Valentina Semyashkina. She points to Lukoil-Komi’s activity upstream from where the oil got into the Ukhta River before entering the Izhma River.

“Accidental oil spills happen in our republic every year. Our people, especially rural people, are very dependent on the river and the forest resources. Therefore, oil spills for us are destruction of our environment and our livelihoods.”

Lukoil has not responded to questions from the Barents Observer on possible sources to the current oil spill.