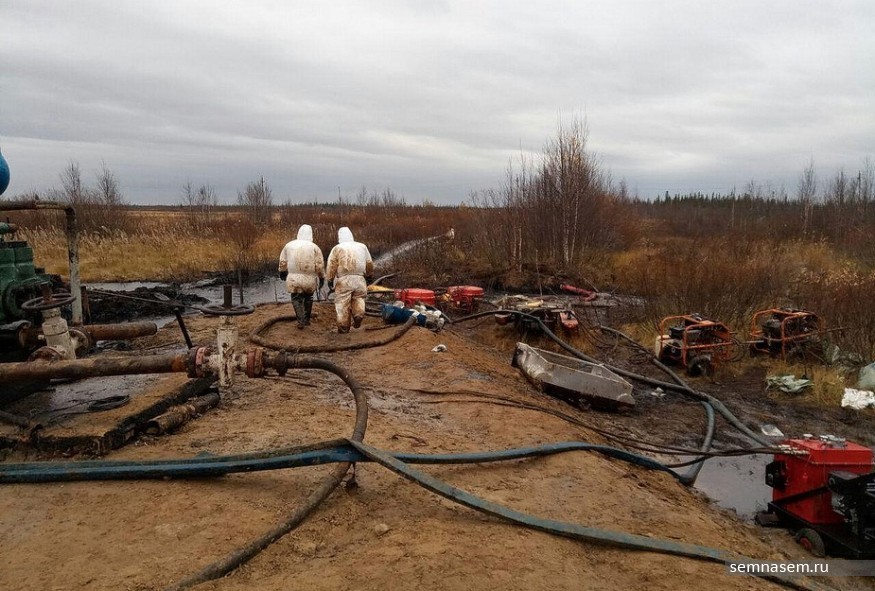 Hectic clean-up on a site near Usinsk as another spill is about to distort vulnerable local lands.
Read in Russian | Читать по-русски
By

At least 170 people were on site when Valery Bratenkov from organization Save the Pechora arrived on site 26th September. The spill had taken place at least four days earlier and personnel from Lukoil was collecting greasy, black substance from the ground, Save the Pechora informs.

The spill from the Verkhne-Vozeyskoye field presumably developed as a pipeline joint ruptured near an oil-gathering line. Lukoil says the area affected by the spill is three hectares. However, people on site say that the proportions are far bigger.

According to Bratenkov, the number of people engaged in the clean-up, as well as the machinery on site, indicates that the spill is significant.

Video footage from from the 7x7-journal similarly shows that volumes are substantial.

A ten-meter wide, one meter deep, temporary reservoir put up for storage of the collected oil was full when the environmentalist arrived to the area. In the course of a few hours, at four trucks loaded with at least ten cubic meters of oil left the site, Bratenkov says.

«It is not a secret that the oil-producing companies in the region are doing what they can to conceal facts related to spills», the representative of Save the Pechora says on the organization’s website.

The spill comes only few months after oil from an abandoned field spread into the rivers of Izhma, Yarega and Ukhta. That stirred major local protest in the affected areas.

Two journalists from 7x7-journal arrived on site 30th September and started filming of the affected area with a drone. They were subsequently detained by local police, but released after a couple of hours, 7x7-journal reports.