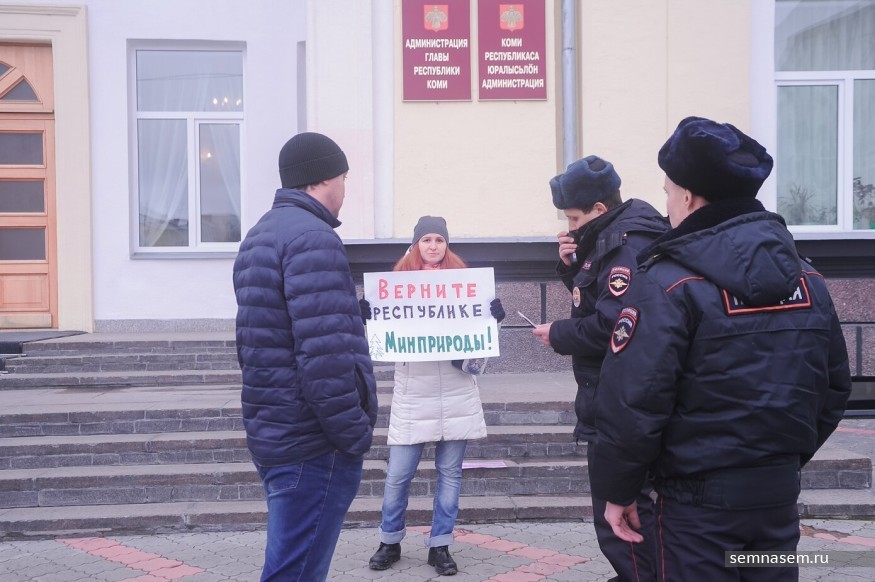 Activist Nina Ananina staged a silent protest in front of the Komi government building. She was not allowed to stand there long.
Read in Russian | Читать по-русски
By

Ananina, who heads the environmental group Komi Ecologists, was detained by police after only 15 minutes, 7x7-journal reports. The activist stood quietly in front of the government building with a poster in her hands.

«Give us back the Ministry of Environment», the poster read.

According to Ananina, the abolishment of the regional Ministry of Natural Resources could result in a weakening of environmental control of regional industry, including the oil and gas companies.

The Komi Republic has repeatedly experienced serious spills from its aging oil infrastructure. Earlier this year, several rivers were badly polluted when old oil wells from the 1950s started to leak.

On 17th of October, the Komi Government announced that it was merging the Ministry of Natural Resources with the Ministry of Industry. The new body will be headed by the latter ministry.

The decision to merge the two ministries must be revoked, the environmentalists underline. A series of more protests and rallies are under planning, they say.

«If we sit home in front of our computers, we will not see any reaction. We have to start doing something», Ananina says to 7x7-journal.

This is the Head of Komi