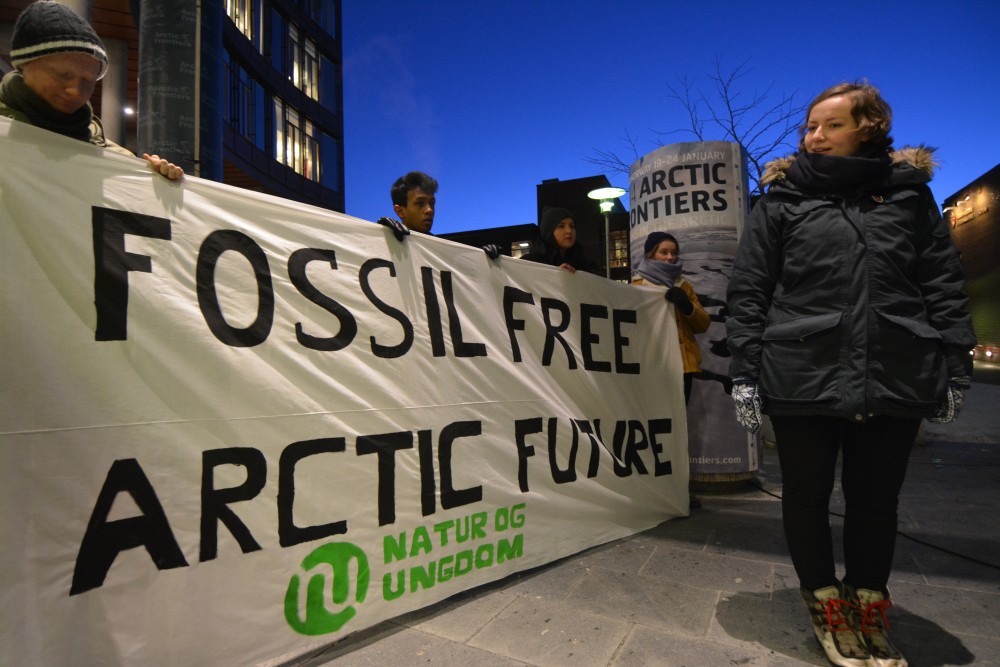 Ingrid Skjoldvær with Nature and Youth. Here at an demonstrated against Arctic oil drilling in Tromsø. Photo: Thomas Nilsen

«A betrayal of the youngsters», says Head of Nature and Youth, Ingrid Skjoldvær, about the Norwegian Government’s decision to offer a record number of blocks in the Barents Sea.
Read in Russian | Читать по-русски
By

All of the 102 blocks originally proposed are now open for tendering by oil companies. The Government defies all environmental objections when Wednesday offering the blocks. 93 of the blocks now being launched are in the Barents Sea, mainly in the northern and eastern part of the Norwegian sector.

«This is madness! More oil drilling in the Arctic is incompatible with the goals of the Paris climate goals,» says Ingrid Skjoldvær, Head of Nature and Youth. The organization is Norway’s largest youth environmental group.

«Minister Terje Søviknes gives full speed for drilling in pristine areas of the Arctic and doesn’t care at all about the future of us that are young today,» she says.

Nature and Youth points to the map and argues that several of the blocks are in vicinity of Bjørnøya, the southernmost island on the Svalbard archipelago. The island is a nature protection area with on of the largest bird-breeding colonies on the northern hemisphere.

The environmental organization gets backing from experts. Both Norway’s Polar Institute and the Norwegian Environmental Agency have recommended to keep oil drilling away from the waters around Bjørnøya.

«This is gambling with the life of large populations of seabirds who live and nest on the island. The Government’s oil policy turns the deaf ear to recommendations given by experts on Arctic environment. It is just so incredibly provocative,» says an upset Ingrid Skjoldvær.

Last year, Nature and Youth together with Greenpeace filed a lawsuit against Norway over Arctic drilling. The environmentalists claim all Barents Sea oil must remain in ground if Norway should fulfill the Paris climate goals.

The lawsuit, translated to English and made available online, reads that Norway’s new licensing decisions for the Barents Sea will have serious environmental repercussions.

Consequently, the lawsuit continues, “the climate impacts of the Licensing Decision constitute an infringement of the fundamental constitutional right to a healthy environment (including a stable climate) for present and future generations enshrined in the Norwegian Constitution Article 112.”

The court case is set to start on November 14.

Previously, the Norwegian Parliament has said oil companies should not drill for oil in those areas north in the Barents Sea where you could find sea-ice. Sea-ice, however, is not a fixed borderline, but moving back and forth from year-to-year. Over the last decade, the ice-edge has moved further and further north, as water temperature in the Barents Sea heats up.

Temperatures in the Arctic are warming at least twice as fast as global average. Last winter, the sea ice in European Arctic was at its second lowest in modern times. Ice free waters were found way north of Svalbard and Novaya Zemlya in the Barents Sea.