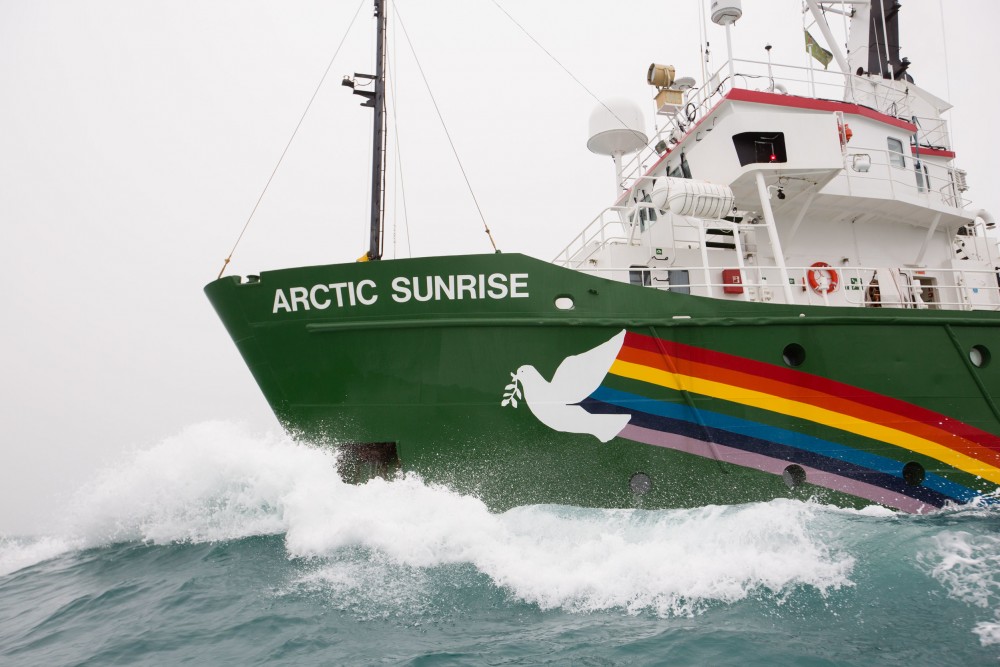 Greenpeace vessel and crew of 35 arrested after protesters violated the safety zone around Statoil’s rig at the Korpfjell field in the Barents Sea.
Read in Russian | Читать по-русски
By

Korpfjell field is the northernmost oil-drilling ever made in the Barents Sea, located at 74 degrees north, some 415 kilometers from mainland Norway.

Protesting the drilling, Greenpeace activists on Thursday entered the 500-meter safety zone around the rig «Songa Enabler» with kayaks and a floating globe with signatures from people all over the world demanding an end to the on-going drilling.

Norwegian police ordered the protesters to leave the security zone, pointing to violations of the Petroleum Act. When Greenpeace refused to leave, the police in Tromsø requested the Coast Guard to take actions. Crewmembers from the Coast Guard vessel «KV Nordkapp» shortly afterwards entered «Arctic Sunrise», took seizure of the ship and arrested all 35 on board.

The police writes in a press-release that Statoil has permission to drill in the area, a permission given by Norwegian authorities.

«Personnel and small boats from Arctic Sunrise have not left the security zone, despite the oil rig’s request to do so, and so they are disturbing the oil drilling. This is violating Norwegian interests according to the Petroleum Act,» the press-release reads.

«KV Nordkapp» is now steaming towards Tromsø at a speed of 10 knots with «Arctic Sunrise», expected to be at port Saturday evening.

«The Norwegian coast guard doesn’t have the right to board or remove our ship. Protest at sea is an internationally recognized lawful use of the sea, related to the freedom of navigation. We are taking action against Arctic drilling in an area where our rights to protest are protected under international law. The Norwegian government cannot unjustifiably interfere with that right.»

He says Norwegian authorities should be more worried about climate changes.

«The Norwegian government seems more interested in protecting the reckless Arctic oil drilling operation carried out by state-owned Statoil, than listening to the concerns voiced by people from all over the world and protecting the right to protest against the opening of a new, aggressive oil frontier in the Arctic. This is a violation of Norway’s duty under its own Constitution and its commitments under the Paris Agreement.»

This is not the first time «Arctic Sunrise» is boarded and arrested for protesting oil drilling in the Barents Sea. In September 2013, Russian Coast Guard boarded and took over the vessel after activists climbed on board GazpromNeft’s «Prirazlomnaye» platform in the very eastern Barents Sea.

«Arctic Sunrise» was then taken towed to Murmansk where it was held in port for nine months. The 28 Greenpeace activists and two freelance journalists on board spent two months in prison, first in Murmansk and later in St. Petersburg before being released by an amnesty.

The protest voyage to the Barents Sea this summer is the first since the vessel was repaired after the arrest period in Murmansk.

Meanwhile, Statoil continues exploration of the Korpfjell prospect. Drilling is expected to last until early September. For Statoil, Korpfjell is very important and fingers are crossed to find big oil. The company says new and major discoveries are «crucial to maintain the current Norwegian Continental Shelf production level up to 2030 and beyond.»

This summer, Statoil has its most active Barents Sea drilling campaign ever.