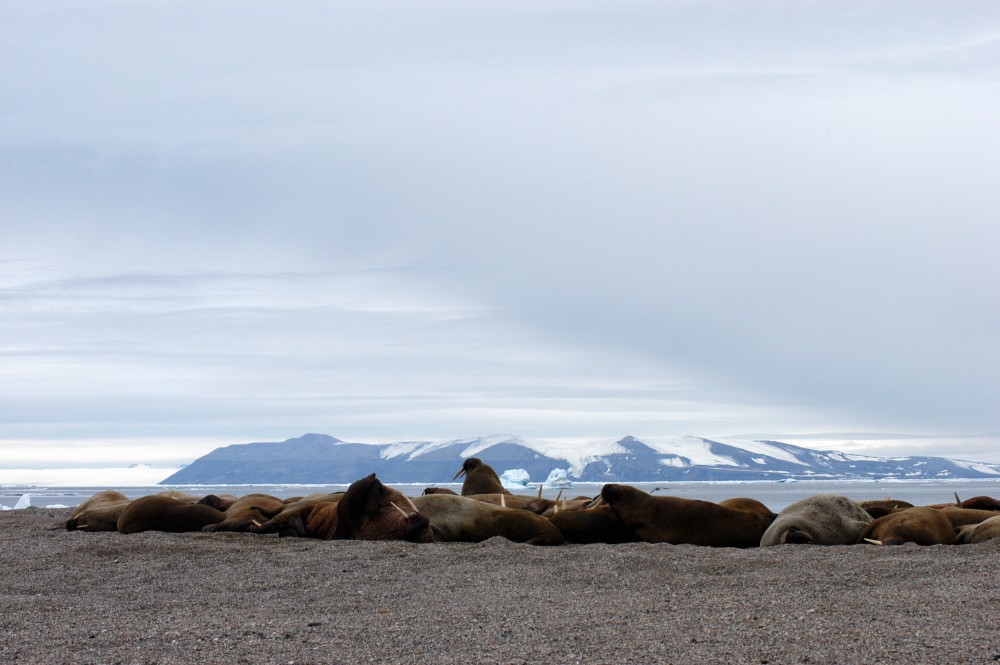 Environmentalists fear that shipping in the Pechora Sea poses a serious threat to one of the biggest populations of walrus.
Read in Russian | Читать по-русски
By

In summertime, up to 2,000 animals assemble on the coasts of Matveev Island in the Pechora Sea. They constitute one of the biggest populations of walrus in the whole Arctic.

But the big animals might not forever feel comfortable on the Russian Arctic island. According to environmentalists the walrus population is affected by the shipping activities. Nearby is Gazprom Neft’s oil platform Prirazlomnaya and Lukoil’s Varandey terminal.

Earlier this year, the environmental organization established a monitoring post on the island and started studying the walrus on site.

«This post allows us to conduct unprecedented and long-term monitoring of the coastal resting place of the Atlantic walrus, this kind of work has never before been conducted in the Barents Sea,» says WWF coordinator Ivan Mizin. «This is of special value considering the continued development of the Arctic […] and the nearby location of the platform «Prirazlomnaya», he adds, NAO24 reports.

The environmentalists now conclude that the nearby ship activity poses a threat.

According the WWF, several ships repeatedly entered the protected waters around the island. Although without permission, some of the vessels also stayed in the area over longer periods. Among the ships violating the environmental regulations in the area are support vessels engaged also at Lukoil’s nearby Varandey oil terminal.

The pollution of the waters and the direct disturbance of the animals might make the walrus leave the area and consequently be deprived on their key breeding grounds, the environmental organization writes in a press release.

The Matveev Island is located in the eastern part of the Pechora Sea, near the Kara Gate, the area which separates the Pechora and Kara Seas. It is part of the Nenetsky nature reserve (zapovednik) and subjected to strict environmental regulations.

Nearby is Russia’s only offshore Arctic oil field, the Prirazlomnaya, and shipping to and from the platform is extensive. The Prirazlomnaya is operated by company Gazprom Neft. Since the field came into production late 2013, a total of 5 million tons have been extracted. In the first six months of 2017, production amounted to 1,6 million tons, an increase of 79 percent compared with the same period in 2016.