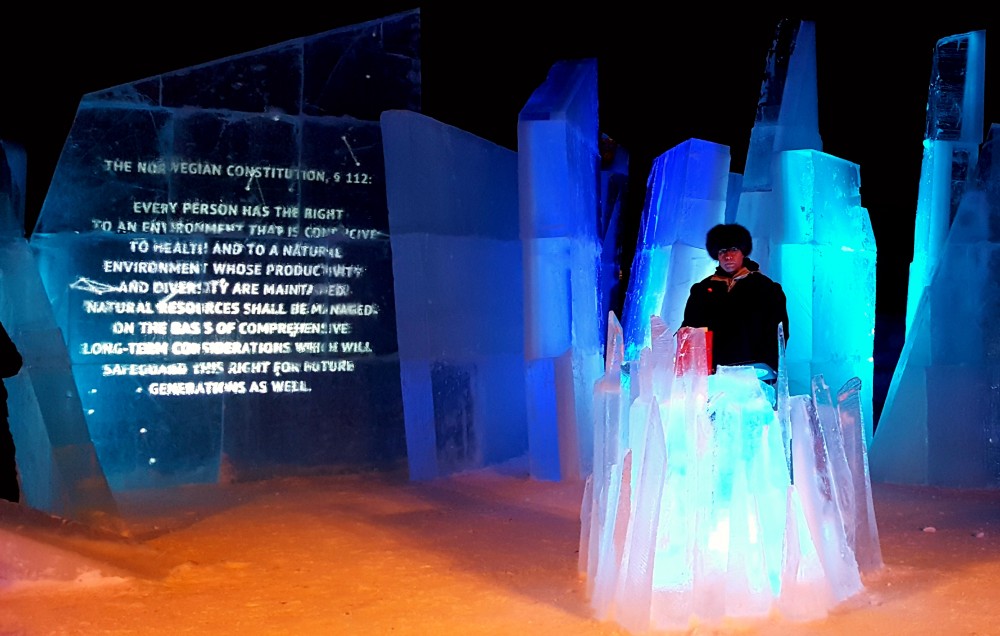 To drill or not to drill, that's the question for Oslo District Court as two environmental groups claim Norway’s government violates its constitutional obligation to protect the environment when it opened for more Barents Sea oil drilling.
Read in Russian | Читать по-русски
By

Politicians from around the globe are this week meeting in Bonn, Germany for talks on how to implement the Paris agreement to fight climate change. The agreement aims to limit warming of the planet to 1,5 degrees Celsius.

Reaching such goal would require to keep a large proportion of existing fossil fuel reserves in the ground. Norway, however, has no plans to leave possible Barents Sea oil under ground. In its 23rd licensing round, oil companies were offered new acreage and exploration drilling has already started.

In the trail starting in Oslo on Tuesday, the two environmental groups Nature and Youth and Greenpeace challenge Norway’s 23r licensing round arguing that opening up the Barents Sea violates the country’s Paris agreement commitments to limit temperature rise to 1,5 degrees.

“We are taking the licensing of new Arctic oil to court simply because the world has found more fossil fuels than we can ever afford to burn if we are to avoid dangerous climate change” Truls Gulowsen, head of Greenpeace Norway says to the Barents Observer ahead of the court doors to open. “If the rights to a healthy environment for future generations shall be upheld, Norway and other fossil fuel nations must respect the carbon budget and stop licensing new oilfields,” he argues.

The groundbreaking lawsuit has got worldwide attention with coverage in in business papers like The Economists and Financial Times. Correspondent for the Financial Times in the Nordic countries, Richard Milne writes in a comment that the lawsuit sends a warning.

“It is a warning to oil companies that drilling in the environmentally sensitive areas such as the Arctic is likely to become more and more controversial. That in turn may intensify questions about the desirability and profitability of drilling the far north,” Milne writes.

Statoil, the most active oil driller in Arctic waters, told the Barents Observer in August that it will come back with another exploration campaign in the Barents Sea next summer.

“We are coming back next year and will drill at five prospects in the Barents Sea,” Dan Tuppen, VP of Exploration for the Barents- and Norwegian Seas said. Statoil’s drilling campaign in 2017 turned our disappointing, with no oil found.

Many of the new areas opened for test-drilling in the 23rd licencing round are in the eastern and northern part of the Norwegian sector of the Barents Sea.

The Intergovernmental Panel on Climate Change (IPCC) has concluded that global warming of over two degrees Celsius compared with pre-industrial levels will lead to a high risk of triggering mass species extinction, widespread ecosystem collapse, and the destruction of the livelihoods of hundreds of millions of people.

Amended three years ago, the Constitution’s Arctic 112 is aimed to ensure the State has an obligation to take measures guaranteeing the citizens’ rights to a secure climate, including for the descendants.

Article 112 reads: “Every person has the right to an environment that is conducive to health and to a natural environment whose productivity and diversity are maintained. Natural resources shall be managed on the basis of comprehensive long-term considerations which will safeguard this right for future generations as well. In order to safeguard their right in accordance with the foregoing paragraph, citizens are entitled to information on the state of the natural environment and on the effects of any encroachment on nature that is planned or carried out. The authorities of the state shall take measures for the implementation of these principles.”

The environmentalists say the case represents “The people vs. Arctic oil.”

Ingrid Skjoldvær, head of Nature and Youth says “climate change is really dangerous, it is really unfair, and it is happening now.”

“The Norwegian government has actively violated the Norwegian Constitution on protecting the citizens of the country. Most of the oil have to remain in the ground, but the Norwegian Government has choosen to close its eyes and are pretending that the Paris agreement never happened,” Skjoldvær says.

Truls Gulowsen with Greenpeace says the licenses issued in the 23rd licensing round will be deemed invalid if the environmental groups win the lawsuit.
“Depending on the nature of the ruling, a win will probably also have consequences for future licensing rounds in Norway, at least that their climate impact will have to be assessed, and will most likely also help inspire comparable lawsuits in other countries. More than 90 countries world-wide have comparable provisions for future generations in their constitutions, and the IPCC climate reports, Paris Agreement goals and UN assessments of the gap between ambition and actual climate policy provides a compelling evidence for the need for further action that I think others can also use,” Gulowsen says.

He argues that the 23rd licensing round was the first big opening by Norway for new oil assets after the Paris Agreement was signed. “[It is] a strong sign of Norway’s climate hypocrisy,” Gulowsen argues.

He says you cannot sign an agreement to stay within 1,5-2 degrees of warming, and at the same time open new oil fields.

“In addition, the Arctic rounds are effectively opening up a brand new region for oil activity, in a time where oil needs to be phased out, not expanded. Currently, there are only two producing fields and almost no petroleum infrastructure in the Norwegian Barents Sea. Therefore, the 23, and possibly upcoming 24 round, represents not only new licenses, but an opening of a new region. In addition, it is less likely that drilling here will ever be profitable, which further reduces the legitimacy of such licensing in vulnerable areas,” Gulowsen says as the court case  starts in Oslo.

The environmental organizations sue the Government by the Ministry of Oil and Energy.

Like at the artistic court hearing during the Barents Spektakel festival in Kirkenes last winter, an ice-sculpture with the Consitution’s Arcticle 112 inscribed was unveiled outside the entrance to Oslo Distric Court on Monday.

The proceedings are scheduled to run until November 22nd and a ruling is likely not to come before early next year.