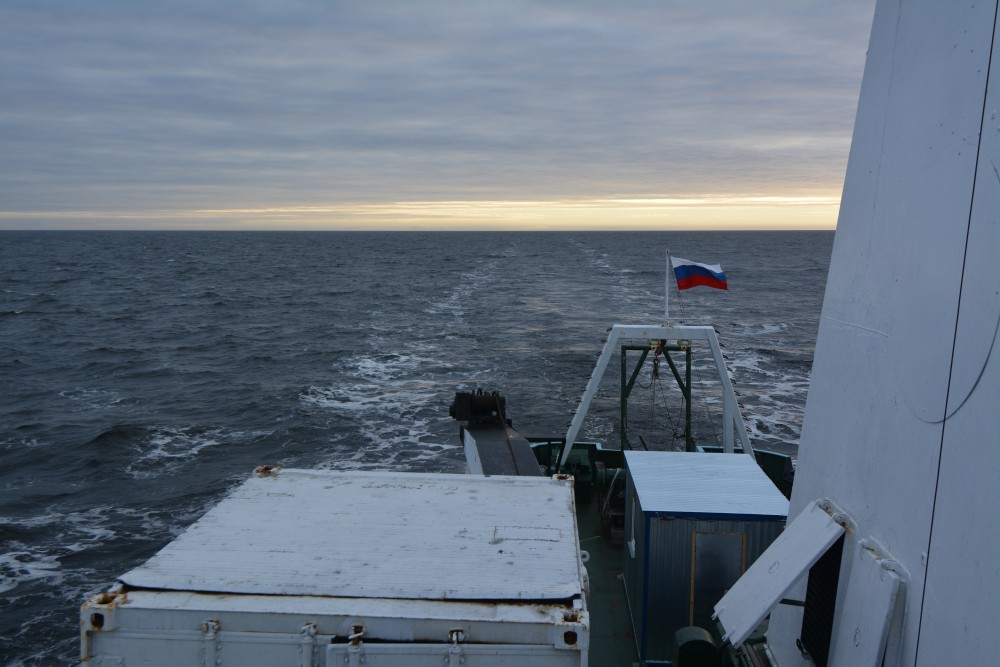 Thousands of containers with radioactive waste were dumped in the Kara Sea during Soviet times. Now, Russia’s Federal Agency for Fishing believes it’s a good idea to start fishing.
Read in Russian | Читать по-русски
By

“We shall present soon a program on development of promising fishing in the Kara Sea,” said Sergey Golovanov at the 5th international conference of fishing in the Arctic, organized in Murmansk this week. He is quoted by news agency TASS.

Golovanov is head of the Science and Education Department with the Federal Agency for Fisheries and has a background from PINDRO, the Marine research institute in Murmansk.

According to Gulovanov, the Kara Sea’s advantage for the fishing industry is that it is a shelf sea, it does not border any territorial waters of other nations. “This is why Russia can have own fishing regulations there,” he said according to TASS.

The Kara Sea has previously not been seen as a lucrative fishing ground. It’s far away from ports and inhabited areas, it’s cold and has been ice-covered most of the winter months. That is now about to change. Over the last decade, larger and larger parts of the Kara Sea remain ice-free due to climate changes for longer parts of the winter.

Sergey Golovanov says fishing for rare species could be promising. Also halibut is living in the Kara Sea and the waters are rich on polar cod, capelin, in flounder, perch and snow crab. “We forecast a possible growth of crab, like it was in the Barents Sea,” Golovanov said.

At the conference in Murmansk, nothing was said about the Kara Sea being the main dumping ground for nuclear waste during Soviet times. No other oceans worldwide have more dumped radioactive waste than Russia’s Arctic Kara Sea.

The radioactive waste comes from the Cold War fleet of nuclear submarines operating from bases along the Barents Sea coast of the Kola Peninsula and from the submarine yards in Severodvinsk near Arkhangelsk. Dumping started in 1960, shorthly after the Soviet Union’s first nuclear-powered icebreaker and first nuclear submarine started to sail in the Arctic.

The Kara Sea was used as the Soviet Union’s dustbin for nuclear waste all the way up to 1990. It was all kept secret and the first official report about the sea dumping was published by President Boris Yeltsin’s environmental advisor Alexey Yablokov in 1993.

With the breakup of the Soviet Union, both the military Northern Fleet and the civilian icebreakers stopped dumping waste at sea.

On shallow waters in the Stepovogo Bay on the southeast coast of Novaya Zemlya, an entire nuclear-powered submarine, the K-27, was dumped in 1982.

The submarine had then been laid-up for more than 15 years after one of the two troublesome reactors suffered a severe leakage of radioactive gasses and inadequate cooling causing extensive fuel element failures.

Dumping the entire submarine at sea was done in what the Soviet reactor engineers and scientists believed would be a safe way to avoid leakages of radionuclides into the marine environment.

The two on board reactors are liquid-metal cooled and contain spent nuclear fuel, 800 kilograms of uranium to be precise.

Both Russian and Norwegian radiation experts have repeatedly warned that failing to lift the submarine eventually one day will cause leakages of radioactivity into the Kara Sea. A worst-case scenario has even pointed to the danger of an uncontrolled chain reaction that could be triggered inside the reactor in case sea water one day starts to leak in through the protecting cover that today isolates the compartment holding the two reactors.

In 2013, a Norwegian-Russian joint study expedition to the dump-site of K-27 concluded that it is feasible to lift the ill-fated submarine from the seabed. Although dumped 30 years ago, the hull of the submarine is intact.

Several other areas of the Kara Sea were also visited by the science expedition.

Additional to the nuclear waste dumped across the Kara Sea, the waters are also next to the Soviet Union’s largest testing area for nuclear weapons. At Novaya Zemlya, 79 nuclear- and hydrogen bombs where detonated in the atmosphere between 1955 and 1962. In the period from 1963 to 1990 another 35 warheads were tested in tunnels under ground. Today, most of Novaya Zemlya is closed off miitary area.

We can, with your help, continue factbased and free journalism in the borderland to Russia in the north. Support the Barents Observer