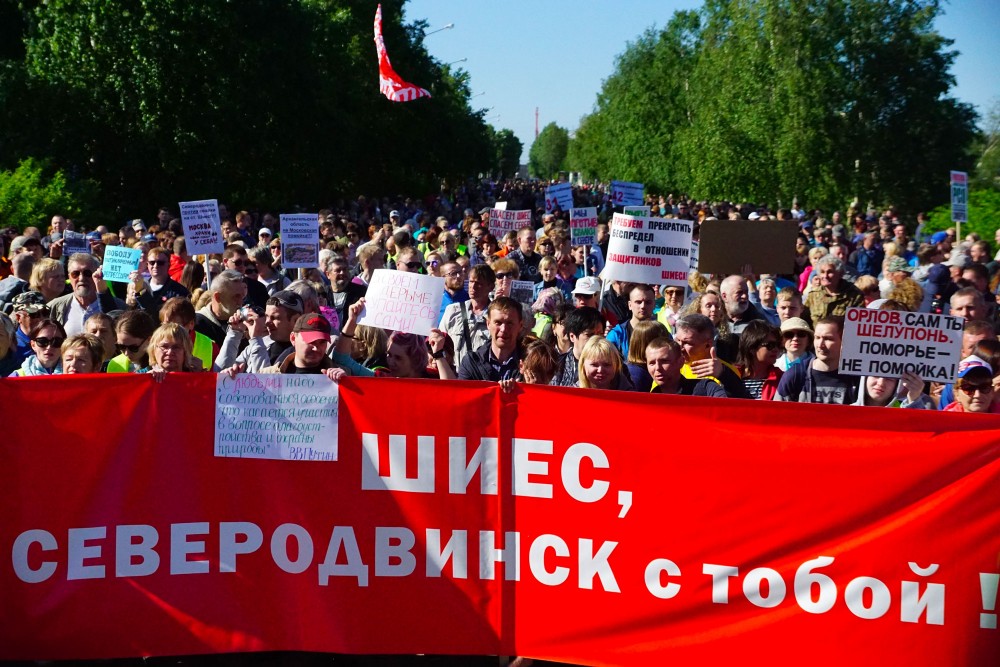 "Shies, Severodvinsk is with you," this banner in Sunday's protest march reads. Photo: "Pomorie - ne pomoika" at vKontakte

The closed military town that builds Russia’s state-of-the-art nuclear submarines is turning into a stronghold of protest against the construction of a huge nearby garbage dump.
Read in Russian | Читать по-русски
By

Several hundred people this weekend marched through the streets of Severodvinsk in a rally against the garbage facility in Shies.

The major garbage dump now under construction in the south of Arkhangelsk region has sparked protest over major parts of the Russian north. And Severodvinsk is leading the way.

«Hands off Shies,» the protesters shouted as they on Sunday assembled along the shores of the great Northern Dvina river. Nearby is Sevmash, the shipyard that is building Russia’s newest nuclear submarines and Zvezdochka, the advanced yard and ship repair company.

«We demand that a referendum is held and that they completely drop the idea to transport garbage from Moscow to the Arkhangelsk region,» one of the key speakers in the rally underlined. Video footage available on social media channels like the “Pomorie  - ne pomoika” shows big crowds in the local streets.

According to a local poll referred to by the protesters, more than 96 percent of the people of Arkhangelsk region is categorically against the building of the Shies dump.

The landfill is to serve huge volumes of garbage from Moscow households. It is to be transported by train all the way from the capital to the remote forest lands of the Russian north. More than 10 million tons of waste is reportedly planned sent to the dump.

The protesters argue that the project is illegal and that locals have not been given a say.

They also underline that that landfill could severely damage local and regional environment. Nature in the area is dominated by wild forests and wetlands and environmentalists fear that the dumped wastes could contaminate streams, rivers and the ground water.

«In terms of the geographical scope, the number of participants and the level of engagement, this is the most powerful protest wave in the modern history of Russia,» the organizers of Sunday’s protest said.

The rally is not the first in Severodvinsk. Several hundreds took to the streets also on the 7th of April this year. Similar protests have been held all over the region, including in Arkhangelsk City, Syktyvkar and the villages of Yarensk and Urdoma.

Opposition is strong in major parts of society. Including in the naval yards. During a recent televised ceremony in Sevmash with a direct line to President Putin himself, a group of workers rolled out a banner where they demanded the dismissal of regional Governor Igor Orlov.

It is not clear if the president noticed the banner, but the incident reportedly created a major stir in the head offices of the company. The banner was removed by security officers on site after about ten minutes, local newspaper Belomorkanal reports.

The ceremony was held in connection with the building of the «Belgorod», a unique rebuilt Oscar-II class submarine.

According to newspaper Novaya Gazeta, the man who initiated the stunt was subsequently fined 10,000 rubles.

Protests against the huge landfill that is in the making in Shies have been going on for months. And they show no signs of receding. Despite increasingly harsh clampdown by security forces, local protesters continue to live in a tent camp near Shies. And street rallies have assembles record-number of peoples in the regional capitals in both Arkhangelsk Oblast and the Komi Republic.

In Syktyvkar, an estimated 5,300 on June 3 people gathered in the streets in what was said to be «one of the biggest protest rallies in this city’s history.»

Cleaner outside, cleaner inside