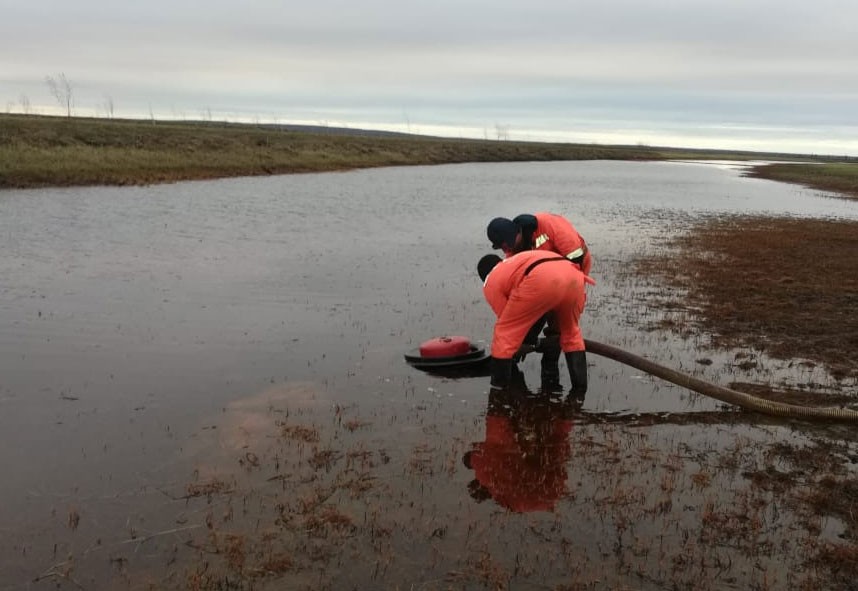 Thousands of tons of spilled diesel oil are being pumped into special containers placed along affected rivers and creeks. The substances will be removed from the desolate area only after the tundra freezes next winter.
Read in Russian | Читать по-русски
By

The spill of oil products from a fuel reservoir in Peninsula Taymyr is unprecedented in size and will have major negative effects on the vulnerable local nature, environmental authorities confirm as the magnitude of last week’s catastrophe is becoming increasingly clear.

Environmental control agency Rosprirodnarzor is now daily taking soil and water samples and says that a preliminary evaluation of the situation will be ready by late June.

About 21 thousand tons of oil products spilled from a reservoir owned by company Norilsk-Taymyr Energy Company on the 29 May. At least 15,000 tons are believed to have ended up in the local rivers and creeks.

The harm to nature can be valued in several billion rubles, Rosprirodnarzor leader Svetlana Radionova told President Vladimir Putin. She participated in an online video meeting with the President and several key government representatives on the 5th June

The 5 June is Russia’s officially Day of the Ecology, and Putin had summoned top representatives of government offices and companies involved in the cleanup of the major spill.

The meeting was the second top-level meeting about the huge leak of oil on the remote Arctic peninsula of Taymyr. In the first meeting on the 3rd of June, Putin harshly criticized regional authorities in the Krasnoyarsk Kray, as well as company Nornickel, for their handling of the catastrophe.

In latter meeting, Putin stepped up his criticism of Nornickel and its leader Vladimir Potanin.

Nornickel must cover the full cost for restoring nature in the area, Putin underlined to Nornickel CEO and majority owner Potanin.

“The owners are obliged to fully liquidate the pollution of soil and waters, ” Putin underlined and added that a comprehensive compensation scheme for restoration of bio diversity and nature in the area will have to come in place.

He also made clear that the Russian General Prosector and the Investigative Committee will study the case carefully to find reasons and assess damage.

“We will pay whatever it costs,” Potanin responded. He added that he believes the price for the clean-up will amount to “ten billion rubles, and more.”

Nornickel fully owns the Norilsk-Taymyr Energy Company, and manages the huge industrial facilities of city Norilsk and the surrounding Taymyr tundra. Nornickel from before has a dubious environmental reputation. Air pollution around the company’s industrial plants in Norilsk and in the Kola Peninsula is among the worst in Russia.

Russian authorities were long at odds over how to clean up the vast volumes of harmful substances from the remote and vulnerable Arctic nature.

Burning was first considered to be the best alternative way to get rid of the oil products. But that alternative has now been abandoned.

Instead, a big number of special containers are being flown into the area and placed along the worst affected rivers and streams. Spilled oil is now pumped into the reservoir tanks.

It is Nornickel that has acquired the tanks that ultimately will be able to store up to 16,000 tons of spilled fuel. The first tanks are being installed on site, Nornickel leader Potanin said. In addition, the company is in the process of producing storage facilities for up to 100,000 tons of polluted soil.

According to Minister of Emergency Situations Yevgeny Zinichev, the containers are hermetic and safe to use. But they will not be removed from the area before winter when the tundra freezes and it will be possible to transport them out of the area on solid ice-roads.

Worst affected by the spill are the rivers of Daldykan and Ambarnaya, as well as connecting creeks and streams. The area has now been divided into sectors, which are being followed up by teams of clean-up personnel.

On site are now almost 500 people from the Ministry of Emergency Situations (Emercom). In addition comes personnel from the federal Marine Rescue Service. There are also experts from oil companies Gazprom Neft and Transneft in the area.

Progress is reported to be significant. According to the Marine Rescue Service, there are almost no more signs of the spill in one of the previously worst affected areas in river Ambarnaya.

The spilled oil is first pumped to temporary facilities along the river, whereupon it is pumped further to bigger depositories located up to 500 meters from the waterways, the Rescue Service informs.

However, flooding and bad weather has complicated operations. In several cases, oil has spilled from lakes into connected rivers and streams, and clean-up personnel has repeatedly had to move oil booms to prevent the substances from spreading.

Information about the situation is firmly controlled  by the authorities and it is not clear whether independent environmental experts have been granted permission to enter the area.