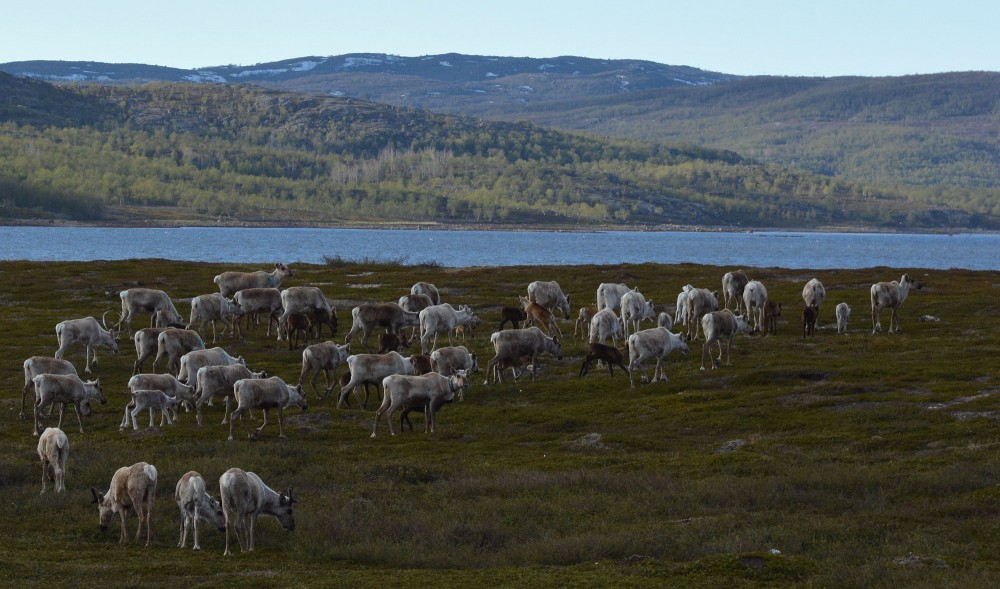 Climate change is triggering behavior change among animals across the Arctic. In Northern Siberia wild reindeer this summer started migrating almost a month earlier than normal.
Read in Russian | Читать по-русски
By

Temperature records are coming one after another across the Arctic. On the 15th August, meteorologists measured 18,1° Celsius at Cape Sterligov on the Kara Sea coast, while the Cape Bellings on the far northern edge of Chukotka was 17,4 degrees warm. At the same time, measurements from the island of Vize at 76 degrees North in the Kara Sea showed +7,0°.

None of the places have ever seen this high temperatures since measurements started in year 1881.

In June, the village of Vekhoyansk in northern Yakutia had the highest temperature ever measured north of the Arctic Circle — 38 degree Celsius.

According to the Russian meteorological institute Roshydromet, the months of April, May and June 2020 all had the highest ever average temperatures in the Arctic, and July copied the record from 2016.

And the heat shocks are coming not only in the air. This summer, Russian researchers measured water temperatures more than 5 degrees higher than normal in parts of the Barents Sea and Kara Sea.

Effects for the Arctic sea-ice are devastating. The waters along Russia’s remote Arctic coast were this year free of ice earlier than ever on man’s memory, and shipments across the eastern parts of the Northern Sea Route started already in May.

When the international MOSAiC expedition this week made it to the North Pole, they found areas with open waters and no multi-year old ice.

“The current situation is historic,” Captain of expedition Polarstern Thomas Wunderlich said as he sailed into the area with an unprecedented speed of 5-7 knots.

According to the National Snow and Ice Institute, the Arctic sea ice extent in July was at the lowest ever for that month and at the third lowest ever in mid-August.

By August 17th, the Arctic sea ice extent stood at 5.15 million square kilometers, the third lowest extent for the date since satellite records began in 1979.

Nature is increasingly feeling the effects of the dramatic changes.

In the small Arctic town of Khatanga, locals in late July watched with bewilderment as herds of wild reindeer rushed through the town streets.

It is not uncommon that the animals take this route on their migration between the sea and inland tundra. But never this early.

Locals say to WWF Russia that the reindeer normally migrate across the area between 2-4 weeks later.

In the herds were many calves that did not make the swim across the wide Khatanga river. According to locals, about 200 of the young animals either did not make it across the river or were left exhausted on the riverbanks.

According to Sergey Verkhovets from WWF, the reindeer might have started to move southwards because of mosquitos and other insects that this year has been found in abundance in the area.

But the general trend is that such abnormalities are triggered by climate change, Verkhovets underlines.

Overall, the current quick changes in the Arctic are leading to the appearance of a series of new phenomena.

“We have to come to terms with the fact that the changing climate will bring many phenomena that previously were not known to the Arctic,” says Greenpeace Program Director Aleksey Kokorin. “It will definitely affect the state of the ecosystem, and the question about how nature will adapt to the new realities remains open,” he adds in a comment.

The wild reindeer in Russia are among the animals that are feeling the changing climate. Over the last ten years, the number of animals is believe to have dropped by 50 percent to about 450,000.

The future of the unique animal might now be at stake, environmentalists warn.

Poaching and industrial expansion must take part of the blame. But it is the changing climate that now is the main force that challenges nature and animal life in the north.