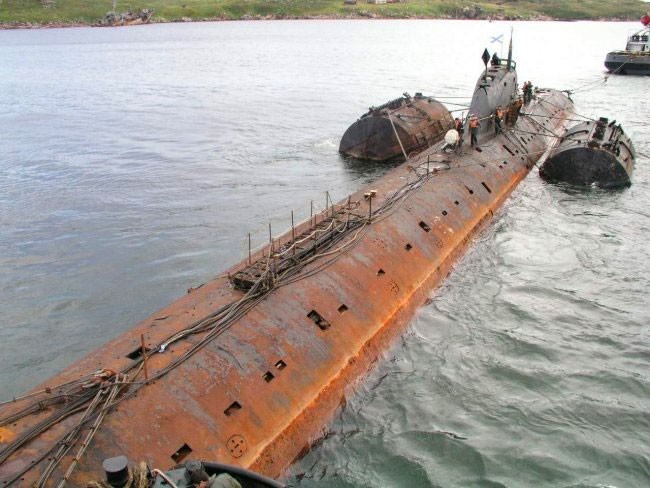 Last photo: submarine "K-159" fastened to the pontoons supposed to keep it floating during towing on August 28, 2003. The same night, it sunk in the Barents Sea. It is now one of the objects that are to be lifted. Photo: Courtesy of Bellona Foundation

The country's nuclear energy company will over the next 8 years lift two submarines and four reactor compartments from the sea bottom of the Barents and Kara Seas.
Read in Russian | Читать по-русски
By

These objects are not environmentally safe, a representative of Rosatom made clear as he this week presented a clean-up plan for the north Russian waters.

In the period between the late 1960s to the late 1980s, about 18 thousand radioactive objects were dumped to sea in the remote northern waters. Most of them represent little environmental risk. But some are increasingly seen as a hazard to Arctic ecosystems.

“Rosatom over the next eight years intend to lift from the bottom of Russian Arctic waters the six objects that are most dangerous with regard to radioactive pollution,” the company spokesperson told news agency TASS.

On the list of objects are the reactors from submarines “K-11”, “K-19” and “K-140”, as well as spent nuclear fuel from the reactor that served icebreaker “Lenin”.

In addition, two entire submarines will be lifted, the “K-27” from the Kara Sea and “K-159” from the Barents Sea. While the former was deliberately dumped by Soviet authorities in 1982, the latter sunk during a towing operation in 2003.

The six objects represent more than 90 percent of the radioactivity sources dumped to sea, Rosatom explains.

The remaining dumped objects are considered of little danger.

“According to studies, about 95 percent of the 18,000 dumped objects have by natural ways come into a safe condition, they have been covered by mud and the level of gamma rays in their surroundings is in line with the natural level,” the representative of the company says.

The lifting operation of the hazardous nuclear wastes will not only be technically difficult, but also very expensive.

A recent report made for Rosatom and the European Commission evaluated the costs of lifting the six most dangerous objects to €278 million. That includes bringing them safely to a yard for decommissioning and long-term storage.

The operation with the “K-159” is alone estimated to cost €57,5 millions. The lifting the “K-27”, transporting to a shipyard for decommissioning and long-term storage in Saida Bay, will come at a price of €47,7 millions, the report reads.

Hardly, Russia’s increasingly cash-strapped treasury will not have €278 millions for the cleanup.

Previously, a number of countries have granted billions to Post-Soviet Russian efforts to cope with nuclear wastes.

Alone Norway has since the mid-90s granted about 1,5 billion kroner (€140 million) for nuclear safety project in the Russian part of the Barents region.