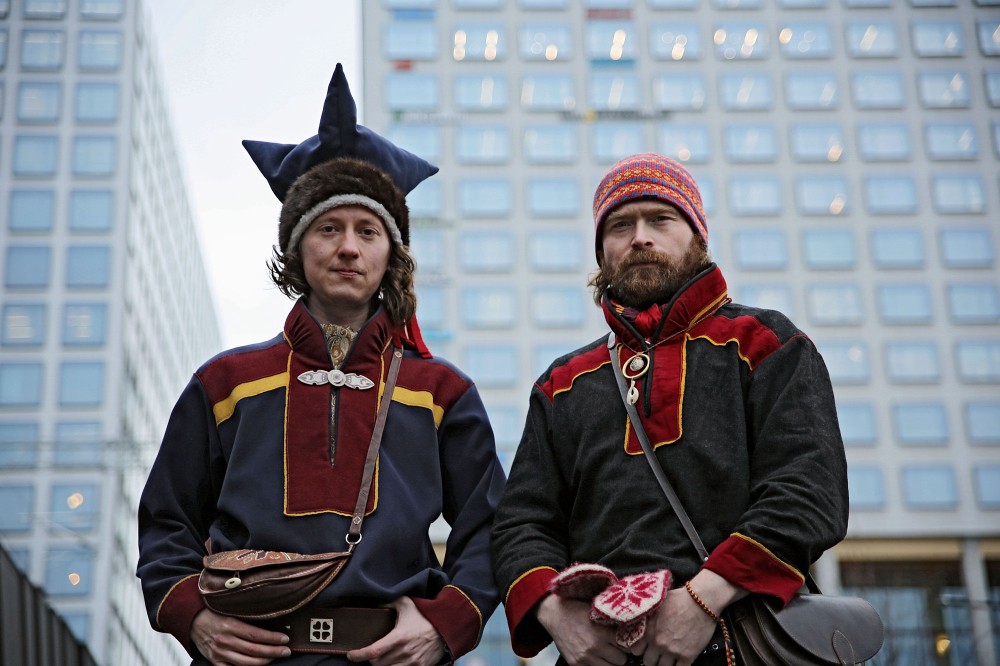 Áslat Holmberg, the vice-president of the Saami Council, and Niillas Beaska, parliamentary leader in the Sámi Parliament in Norway, travelled to Helsinki to meet up with ST1. Photo: Kukka Ranta

During the recent years, there has been increasing interest in the northern Nordic regions to use their natural resources for renewable energies. While the fight for climate change is important for the communities, some fear that proposed plans will bring more harm than good to the area. The Finnish energy company ST1 and Grenselandet AS are facing criticism from Sámi community members and locals in their proposed wind farm project, named Davvi (northern Sámi for north), as previously reported by the Barents Observer.

The main concerns over the proposed wind farm centre around Sámi culture, reindeer herding and the rights of indigenous peoples to practice their culture. In late November, Áslat Holmberg, the vice-president of the Saami Council, and Niillas Beaska, parliamentary leader in the Sámi Parliament in Norway, travelled to Helsinki to meet up with ST1 representatives and deliver their message from the North. Their message is clear; no wind farms in the Sámi homelands.

Áslat Holmberg explains that they wanted to visit the ST1 headquarters to redeliver this message, since he believes that previous opposition has not been taken seriously enough by the company. ST1 has previously organised hearings in the north where local people and community members were able to pass on their opinions. According to Holmberg, these concerns were somewhat ignored or downplayed; “ST1 aimed to downplay the resistance, even though the reindeer cooperatives, Sámi Parliaments and nearly all of the area’s municipalities have stated their resistance,” Holmberg explains. Holmberg thinks that the seemingly empty wilderness and fell areas might seem like ideal places for large projects such as mining or wind farming - less people, more space and less resistance. What many companies fail to realise is that these seemingly empty spaces are in active use by the locals, who may not be thrilled by these proposed changes.

One of the most alarming developments, according to Holmberg, are the attempts by Grenselandet AS (whose majority shareholder is ST1) to contact individual reindeer herders in the hopes that they are able to convince these individuals to change their current standpoint. “That was one of the main messages, that this is not an appropriate or ethical way to move forward,” Holmberg states. Holmberg explains that it is not appropriate to bypass those reindeer cooperatives whose herding areas this proposed wind farm concerns. In addition, one person is not able to make decisions on behalf of the whole cooperative. “There has been bribery and threats as well, threats of expropriation if they don’t go along with the contracts,” Holmberg explains.

During their meeting, Holmberg and Beaska reminded ST1 representatives of the recent decision by the Supreme Court of Norway to declare the wind farms Storheia and Roan in the Fosen region to be in violation of the rights of the Sámi people under international conventions. The wind farms have been stripped of their licences. “Even though they followed all the rules and regulations that Norway imposed, it was still declared illegal after [the wind farm] had already been built,” Holmberg says. “This will have remarkable financial consequences to the company,” he continues. Holmberg and Beaska reminded the ST1 representatives that even if they follow all the rules and regulations, it is good to keep in mind that they must consider the effects on the broader Sámi culture as well. “Some reindeer herders had to stop practicing reindeer husbandry, which means that the wind farms are directly preventing people’s right to practice their own culture,” Holmber continues.

When asked about the ‘not in my backyard’ (also known as NIMBY) thinking, Holmberg states that the energy created in the proposed wind farm would not even be used by the locals. “As far as I know, northern Norway currently produces more energy than it uses and this [wind farm] would be used for the growing energy needs in the south.” Holmberg says that it would be better to create energy closer to the areas where the energy consumption is larger. As a rule, wind farms should be built in areas where the municipalities and local communities welcome the projects. Wind farms are not suitable for every area, Holmberg reminds. It is possible that the Sámi homelands look appealing to the companies because of their relative emptiness. “If you just look at a map or aerial photos, the northern regions are relatively sparsely populated and there is not that much infrastructure,” he says. “To their eyes, it looks like there is a lot of empty space and could easily fit 150 wind farms,” Holmberg continues. And of course it should not be forgotten that Rastigaisa is one of the only areas with large fells and the wind conditions would be ideal there.

Holmberg states that the meeting in the ST1 headquarters was held constructively and in good spirits. According to Holmberg, it was made clear that no resolution would come from this meeting alone, but he is pleased that they were able to present their concerns and ST1 welcomed the continuation of the dialogue. Holmberg and Beaska delivered their message from the point of view of civil society organisations and succeeded in reminding the company of the main grievances. “At least they will not be able to say that they did not have that knowledge,” Holmberg states.

Holmberg speculates that this might not be the only delegation to visit ST1 headquarters and that there are many other groups that want their voices heard too. “I believe these negotiations will continue and we will have to see how the situation develops,” he says. He believes that the decision to declare Fosen wind farms illegal is a pivotal moment in defining wind farm industries’ future in the Sámi homelands. Holmberg states that there is a need to outline the rules when it comes to wind farming, and that this should not be done without the consent of the local people. “This is the standard we will be calling for in the future, he concludes.