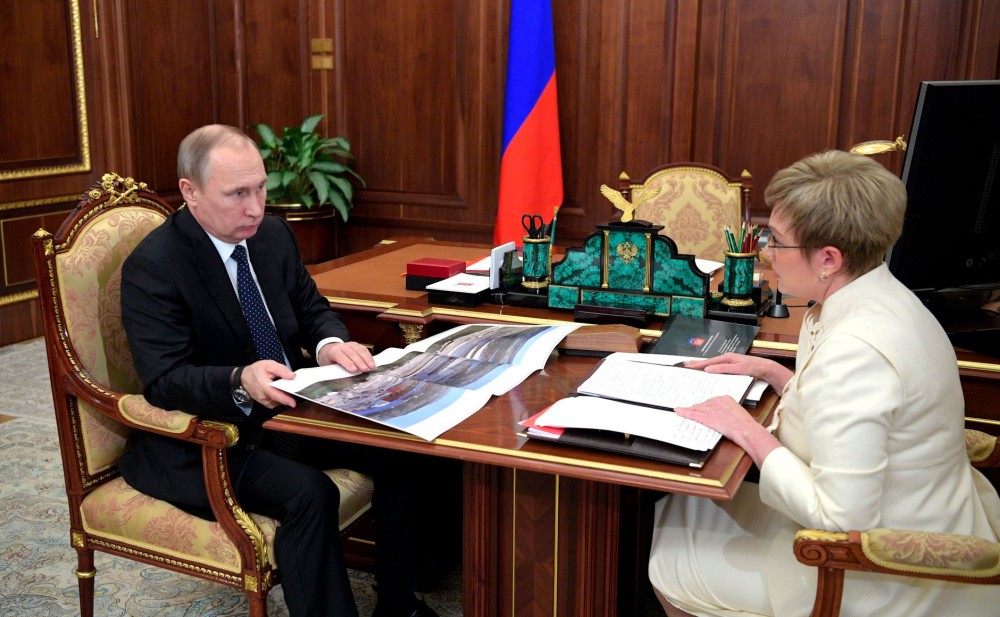 More than 3,000 of them are connected with Novatek’s and Rosneft’s plans in the region, Marina Kovtun highlighted in today’s meeting with the President.
Read in Russian | Читать по-русски
By

Our social and economic development is stable, Marina Kovtun underlined as she on Thursday was summoned to the Kremlin for a briefing with Vladimir Putin.

And there is a positive dynamics in several sectors, she added. According to the governor, regional GDP in 2016 increased by 0,4 percent. Public debts are down, and the region’s 2017 budget is the first in many years without a deficit.

Regional journalists in Murmansk had speculated about possible big news from the governor’s meeting with the President. However, today’s talk did not reveal anything new about Moscow’s plans for the Arctic region. At least if judging from the transcript made available by the Kremlin.

Putin hardly said a word during the meeting.

«Out main priority is to enhance the investment climate of the region», Kovtun underlined and added that she has a list of 12 strategic development project which includes investments worth more than 90 billion rubles.

«More than 7,000 new jobs will be created», she said and highlighted plans projected by Novatek and Rosneft.

According to the governor, Novatek will in 2017 start an active phase in development of a center for construction of modules for offshore LNG plants.

«We are also expecting that Rosneft in 2017 starts an active implementation phase of its projects on development of a coastal supply base for shelf projects».

The overall investments planned by Rosneft in the region amount to an estimated 120 billion rubles by year 2030, while Novatek plans to invest 25 billion rubles, the governor told President Putin.

Last time Kovtun met with the President was in October 2015. Also then, Arctic developments and regional oil and gas developments were high on the agenda.

”I hear that your your bays are very good with good depths”, Putin told the governor.

Murmansk has for decades worked hard to make oil companies engage in the development of rich hydrocarbon resources in the Barents Sea. After the collapse of the Shtokman project, regional authorities have put their stakes on cooperation with Rosneft.

Rosneft in 2013 announced that it wanted to develop a supply base for its offshore operations in Roslyakovo, a previously closed military town located near Severomorsk. The new base would include various functions, among them service facilities for drilling rigs and oil platforms.

In order to facilitate the developent, regional authorities subsequently took Roslyakovo out of the closed military territory of Severomorsk and instead included it in the city of Murmansk. The transition was necessary for the development of major non-military operations.

«Today, there are not hindrances for inviting foreign investors to Roslyakovo», Governor Kovtun underlines.

Who sabotaged the Murmansk power plant?