The Goliat platform arrived in the waters outside Hammerfest in April 2015 and is so far Norway's only oilfield in production in Arctic waters. Photo: Thomas Nilsen

Studies of the northern part of the Barents Sea shows twice the resource potential per square kilometer as the southern Barents Sea.
Read in Russian | Читать по-русски
By

The area mapped for potential oil and gas is further north than anyone ever in the circumpolar Arctic has imagined to look for petroleum.

An area of 170,000 square kilometres from 74° to 77° north, east of Svalbard, might hold as much as 1.4 billion standard cubic meters of oil equivalents.

«This figure is naturally associated with some uncertainty. It could turn out to be lower or it could be much higher,» says Bente Nyland, Director of the Norwegian Petroleum Directorate. She presented the new findings at the Barents Sea conference in Hammerfest on Tuesday.

Including earlier estimates from the southern part of the Barents Sea, the total Barents petroleum resource estimate is now 2.8 billion standard cubic meters of oil equivalents.

A large part of the new area is located in the previously disputed area. In 2010, Norway and Russia signed an agreement that placed the boundary and mapping for petroleum resources could start. 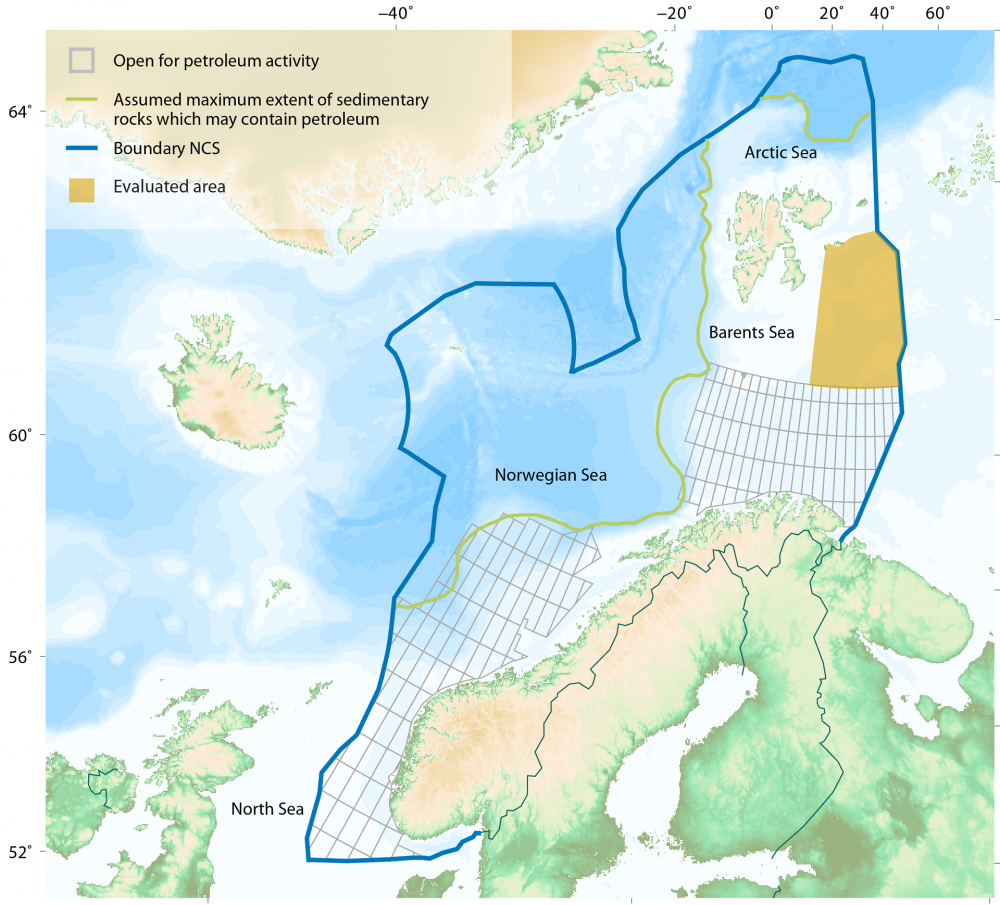 Since 2012, the Petroleum Directorate has mapped the new areas in the eastern and northern parts of the Barents Sea. The northernmost areas are not opened for oil drilling, but both Statoil and Rosneft are interested in the areas on both side of the border line.

EU and USA have both put sanctions on Russian Arctic offshore drilling. As a result, no European nor American oil companies can take part in oil exploration and production offshore anywhere north of the Arctic Circle on the Russian shelf.

In Norway, environmental groups have filed a lawsuit against the state over Arctic oil drilling. The groups argue that the state violate the Norwegian people’s constitutional right to a healthy and safe environment. Barents Sea oil must remain in ground if Norway should fulfill its Paris climate deal obligations, the environmentalists claim.

In a few weeks time, the drilling season starts in the Barents Sea. After two years without test-drilling, Statoil is now making ready for five to seven drillings and partner agreements are signed with ConocoPhillips, OMW, DEA and Point Resources. A test-well will also be drilled near the existing Goliat-field, where Statoil partners with ENI Norge.

The Petroleum Directorate is expecting a new record in the number of exploration wells in the Barents Sea this year.

Fifteen wells are slated for drilling, two more than in the record year 2014.

“This is a significant increase, and shows a very positive development in the Barents Sea,” says Bente Nyland, talking to the audience at the Barents Sea Conference.

The northernmost drilling this year take place at Korpfjell further northeast in the Barents Sea.

The Directorate says the drilling is a «wildcat» and important since it is the first in the northeast area and considered an important part in the work in mapping the geology in this part of the Barents Sea.

“The well could confirm whether there is petroleum in the area, and will provide us with invaluable knowledge about the subsurface,” says Director Nyland.