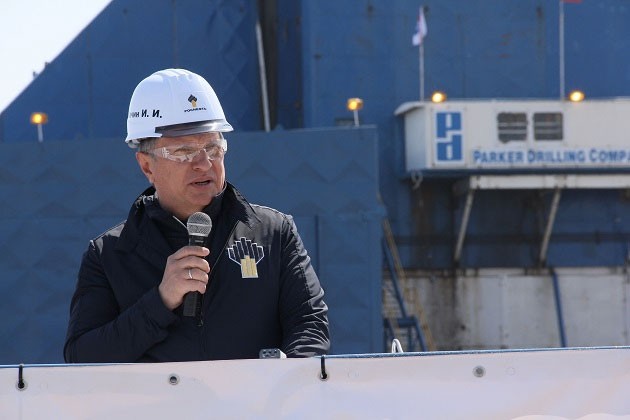 Igor Sechin and his Rosneft looks to Norway. Photo: Rosneft.ru

The 2016 annual report of Rosneft, published this week, outlines the Norwegian shelf as one of six foreign regions of special interest.

According to the company, the Norwegian shelf is an area «highly perspective for participation and development». Rosneft intends to continue to take part in license rounds for new blocks, the report reads.

Of special interest are the waters in the Barents Sea, including the areas located adjacent to the Russian border.

At the same time, companies step up drilling programs in the area. A total of 15 wells are planned drilled in the region this year, the Norwegian Petroleum Directorate says. That is a record high.

Among those wells is the Korpfjell (PL859), a license operated by Statoil located in the northeastern part of the Barents Sea, near the maritime border to Russia.

Rosneft is today represented on the Norwegian shelf with its 20 percent share in license PL713. The license located in the central part of the Barents Seais is operated by Statoil along with North Energy, Edison International and Rosneft. In August 2014, the partnership conducted an exploration well in the license block of Pingvin-1. That, however, revealed only a minor discovery assessed as non-commercial.

The Russian company is represented in Norway through its subsidiary RN Nordic.

Rosneft and Statoil in 2012 concluded a major cooperation agreement which includes joint operations in the both the Russian and Norwegian parts of the Barents Sea.