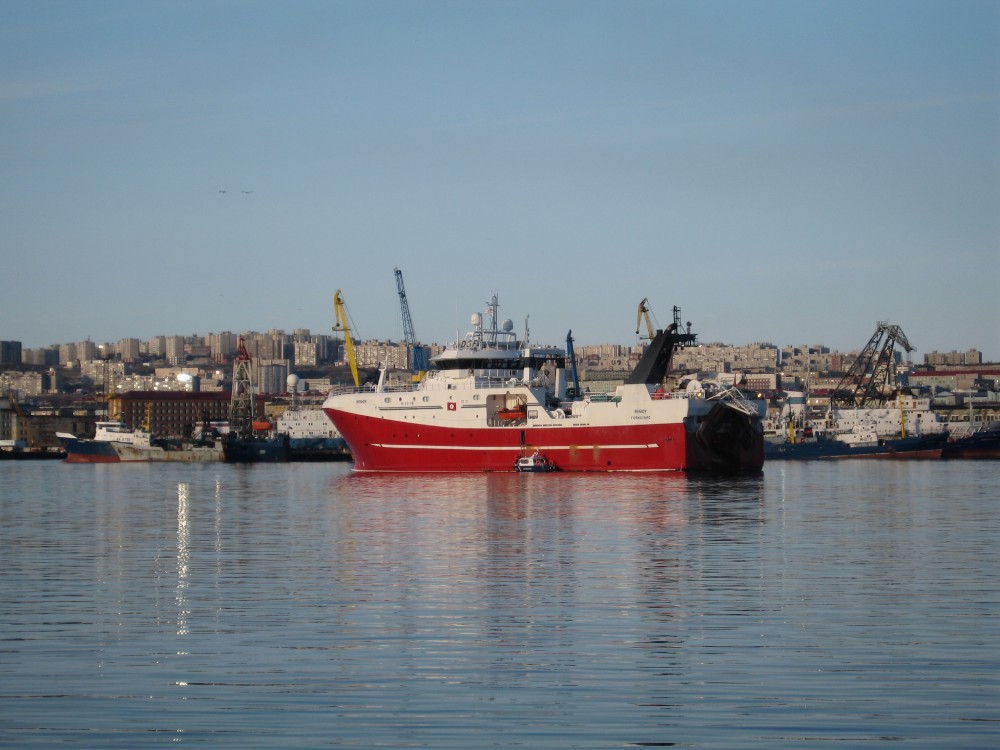 The "Remøy" is under arrest in Murmansk for illegal shrimp catch. Photo: Bloger51

A Russian court demands more than 9 million of euros for the release of «Remøy». But the sum could have been far higher.
Read in Russian | Читать по-русски
By

The court in Murmansk demands 394 million rubles (€6.2 million) from the Norwegian shipowner and an additional 197 million rubles (€3.1 million) from the captain for the release of the trawler. The sums are based on the marked price of the shrimps caught by the vessel during its more than three weeks of fishing in Russian waters, Bloger51 reports.

The court estimates that the ship caught almost 400 tons of shrimps during its stay in the Russian economic zone and that the marked price per kilo is 330 rubles. In the case of the company the catch value is multiplied by three, for the captain - by 1,5 times.

The Norwegian shipowner considers the total sum of €9.32 million far too high and refuses to pay.

However, the sum could have been even higher, Bloger51 reports. The court could have decided to include also the value of the ship, and additionally confiscated the catch, the Murmansk-based news provider argues.

The Norwegian trawler was on the 11th May arrested by the Russian Coast Guard for illegal fishing of shrimp in Russian waters. Since then the ship has been lying idle in the port of Murmansk awaiting court procedures.

The Norwegian Fishery Directorate confirms that an administrative error on the Norwegian side is the reason for the detention of the «Remøy». The trawler had applied for license to shrimp catch as part of a Norwegian quota in Russian waters. The license was issued, however the documents submitted by the Directorate to the Russian side included mistakes.

The case has now been picked up by the Norwegian Foreign Ministry, which is seeking a resolution through diplomatic channels.

«Norwegian shipowners will no long dare to fish in Russian waters, and already today the Russians catch ten times more in Norwegian waters, than we do on the Russian side», he adds.